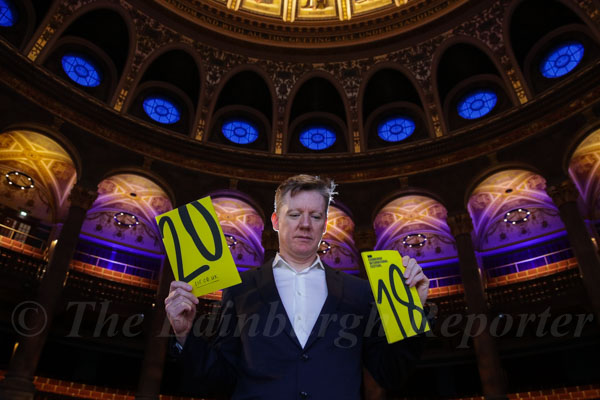 Fergus Linehan has been Festival Director for three festivals and 2018 will be his fourth. He continues to bring a fresh look to the most august of August festivals. This year alongside what you might consider the  classical offerings at the Festival, the boundaries are being extended even further to include all kinds of popular music down at Leith Theatre.

We sat down with him on a very busy day ahead of the full programme launch at the McEwan Hall to find out what this year has to offer. Where have you been this last year looking for new things? Oh we have been all over the world, my team and myself. We went to the US, across Europe, Australia and Asia.

What is the newest thing you are bringing to Edinburgh this year?

Linehan replied : “It is always about the artists, and in this job you are working with some of the greatest artists in the world. So it is all about them, their fascinations and their interests and it is constantly changing. There are some interesting ideas out there and some anniversaries like the centenary of the end of the First World War which is preoccupying people.

“There is also the centenary of the birth of the great composer Leonard Bernstein which people are celebrating too. And of course it is the year of Young People in Scotland.

“Those projects tend to bubble up to the surface but you cannot be too prescriptive with artists and tell them what to think about!” Last year we had Bloom so how do you improve upon that?

“It is a co-commission between the Proms and ourselves. We wanted to work together being the two big summer festivals in the UK. We thought we would commission an event which would take very different forms in both locations.”

So if somebody sees this at the Albert Hall in London in July they will not see the same thing in Edinburgh at the beginning of the festival?

“No it will be quite different!

“Anna Meredith a Scottish composer is going to get the profile at the Scottish event and at the Proms, so there are great benefits to working together. For us last year was a bit of a celebration or a birthday party. That was the intention of the opening event. This year we are going back to something which is probably more of a performance. We found that site in front of the Usher Hall to be almost like an arena or a performance venue.

“It really worked for Harmonium and we thought we would start with the music by commissioning someone so Anna Meredith is an Edinburgh composer with both an electronic and symphonic career and she is doing a five movement piece for us based on these telegrams she found in the Imperial War Museum.

“These were sent from the Front at the end of the First World War by very young people. We thought this was a year when we could involve young people in a participatory wain the performance, so we have students from the Edinburgh College of Art who have designed some costumes. There is a digital projected element but there is also a live element. It will be a very moving story with these tragic telegrams.”

Defending himself against the one-off programmes when the festival took events to the people on the canal and in churches and venues across the city Linehan said : “We have to make choices every year. We may come back to those kind of events again but we are taking on the Leith Theatre which I think you will agree is a pretty big choice.

“We are putting on an outdoor event at Holyrood Palace called Kadamati which is a piece created by Akram Khan. It notes the end of the First World War and anyone can come along to that.

“But with this Festival you have to be careful not to become too locked into a format of doing the same thing every year. There is a bit of a risk in doing things outdoors in August in Edinburgh you know. So we don’t want to roll that dice too many times!

“But yes we have the fireworks with the Scottish Chamber Orchestra, one of the great fireworks displays of the world with a terrific orchestral concert. This year we have Holst’s The Planets and a bit of Leonard Bernstein too. It is a reflection of the serious music which the festival incorporates done in a way which is good fun for everyone.”

The festival programme is launched today 14 March 2018 at 6.30 and you will be able to find details of the full programme of events here. Booking opens to the general public on 24 March 2018.

Full programme below for downloading. First Made In UK Day takes place this month