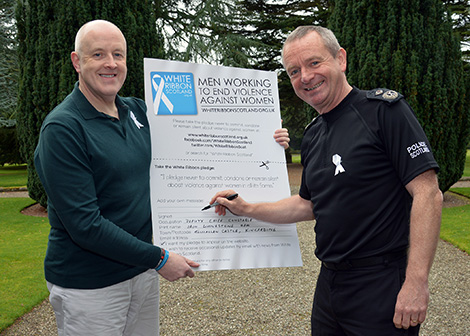 Police Scotland’s most senior officers and staff today signed the White Ribbon pledge to end violence against women and girls.

White Ribbon is a global campaign to eradicate male violence against women and White Ribbon Day, 25 November, marks the start of 16 days of Activism against Gender Based Violence.

Signing the pledge, Deputy Chief Constable Iain Livingstone said:“Every day our officers and staff work to tackle violence against women, to prevent offences and make our communities safer for all.

“Violence against women takes many forms, whether it’s sexual crime, domestic abuse, human trafficking, female genital mutilation or another form of abuse. The vast majority of these offences take place in private or in virtual space rather than public spaces. While most men do not perpetrate violence against women, the overwhelming majority of offenders are men.

“This has to stop.

Davy Thompson, Campaign Director of White Ribbon Scotland said: “By signing the White Ribbon pledge, Deputy Chief Constable Livingstone and other members of the Executive of Police Scotland have set an example to others in the police service and beyond to declare their opposition to male violence against women by also signing the pledge.

“White Ribbon Scotland appreciates their involvement in the campaign and their decision to stand up as role models to others. In so doing they have taken an important step towards the elimination of gender based violence and abuse across Scotland.”

Officers and staff across the service are also being encouraged to sign the White Ribbon pledge.

White Ribbon Scotland is part of the largest international campaign to involve men in addressing men’s violence against women. It originated in Canada and campaigns now exist in over 60 countries worldwide including Australia, Pakistan and Switzerland. One aspect of the campaign is to ask men in Scotland to sign a pledge which states:

‘I pledge never to commit, condone or remain silent about men’s violence against women in all its forms’.

Men and women can sign the pledge online at http://www.whiteribbonscotland.org.uk/makepledge