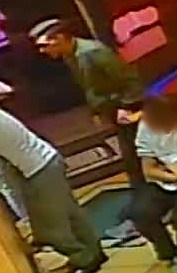 Police have released CCTV images of a man they wish to trace in connection with an ongoing investigation into a serious assault which took place around 2.30am on Saturday 29th July 2017 in the Kingfisher Restaurant on Bread Street.

A 22-year-old man was punched to the face and attended the Edinburgh Royal Infirmary where he was found to have sustained a fractured jaw.

The man pictured is described as white, in his late teens to early twenties, 5ft 7-9ins tall, of slim build with short dark hair that was shaved at the sides with the longer hair on top styled in a quiff.

He had a local accent, is believed to have links to the Muirhouse area and was seen in the company of two other men.

PC Callum Johnston of Gayfield Police Station said “The man in these images is believed to be of significance to our investigation and we’d urge anyone who can assist in tracing him to come forward as soon as possible.”

Anyone with information can contact Police Scotland on 101, quoting incident number 0615 of 29th July, or report this anonymously to the charity Crimestoppers on 0800 555 111.