Hibs  have partnered up with Scottish Government to help eradicate hate crime and communicate the message that ‘Hate has no home in Scotland’.

The Scottish Government has launched a campaign to raise awareness of what hate crime is and to empower those who either witness hate crime or experience a hate crime to report it to Police Scotland or a third party reporting centre.

More than 5,300 cases of hate crime were reported in Scotland over the past year. The definition of a ‘hate crime’ includes crimes motivated by prejudice based on race, religion, sexual orientation, transgender identity or disability.

Laura Montgomery, Head of Sales and Sponsorship at Hibernian FC said: “Hibernian have had a long history of inclusiveness from the Club’s beginnings to the modern day era.

For more information on hate crimes and to report concerns visit www.onescotland.org 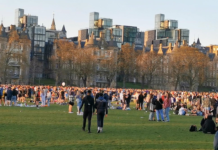