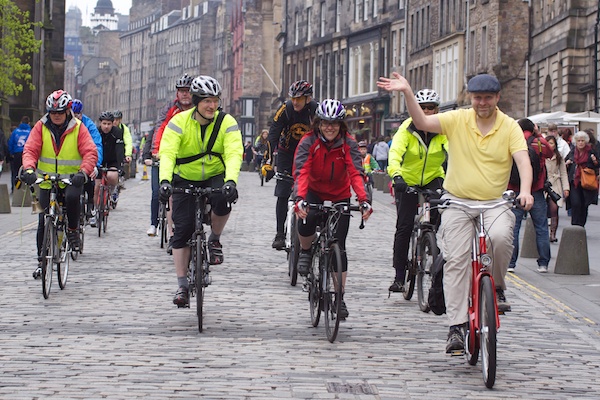 The sixth Pedal on Parliament will take place in Edinburgh this Saturday 22 April 2017.

Follow what Pedal on Parliament are up to here on Twitter. This year for the first time there are four rides across Scotland in Aberdeen, Inverness, Edinburgh and on Sunday in Glasgow.

We spoke to one of the organisers, Kim Harding, about the need for the demonstration now so many years after they started with the idea of a one-off single event.

Who’s going to @POPScotland this weekend? We spoke to @kim_harding about this – the sixth! pic.twitter.com/Mffrt81GQC

TER : Kim Harding you are one of the organisers of Pedal on Parliament which takes place in Edinburgh and other cities this weekend.  Tell us about it.
KH : This will be our sixth Pedal on Parliament. When we started it in 2012 we didn’t expect to be going this long.
It was planned originally as a single ride, a single event.
But this year we are spreading out. We’re going to be in four cities across Scotland.
We are in Edinburgh, Aberdeen and Inverness on the 22nd and in Glasgow on the 23rd.
TER : Why is it still needed?
KH : We haven’t got there yet, we’re still fighting to get the proper investment in infrastructure we’re looking for.
We are looking to see Scotland made into a safer more cycle-friendly place. Which would be better for everyone.
TER : Have the Scottish Parliament listened at all?
We have seen a reversal in the budget cuts that were coming down when we first started. But we’re not seeing the increase in funding we are looking for. We are still struggling to get that. We have seen a change in the nature of the infrastructure that is put in. We are beginning to see more continental style infrastructure.
At last it is beginning to get there. So we are making progress There is some good news there.
TER : Is any one city better than the others?
KH : Not really currently. Edinburgh I suppose is the only one that is committed to spending 10% of its transport budget on cycling but now Glasgow is pledging to do the same. It is starting at 5% and building up 1% a year the way that Edinburgh did. Other cities are looking at doing that. So we are beginning to see some progress with some cities but not all.
TER : Where will people come to meet the ride on Saturday in Edinburgh?
KH : We are starting off at 12 o’clock. We will be leaving the Meadows.  We gather on the Meadows go up George IV Bridge,  turn down the High Street and come down to Holyrood.
TER : Are the roads closed here in Edinburgh?
KH : Yes there will be closed roads here in Edinburgh and in Glasgow.