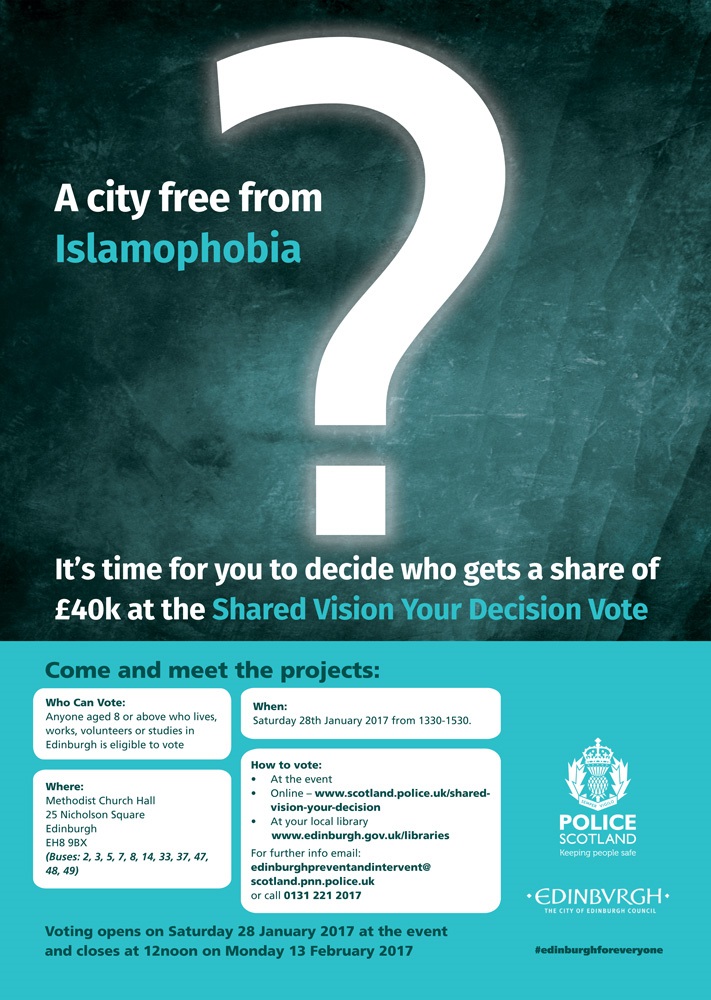 Police in Edinburgh and the City of Edinburgh Council are inviting people to vote for projects designed to create a city free from Islamophobia.

The total fund available is £40,000 and has been contributed to by Police Scotland, City of Edinburgh Council and Scottish Government.

Its purpose is to help local people deliver innovative projects which reduce prejudice and foster positive relationships between diverse communities.

Between 10 November and 12 December, applications were submitted for projects to receive up to £5,000 from the total fund.

Residents are now being asked to decide which of 34 projects, who collectively applied for over £120,000, will be given funding.

The communities of Edinburgh are invited to attend an event at Methodist Church Hall in Nicholson Square on Saturday 28 January, from 1.30pm – 3.30pm, where these projects will be showcased and voting will open.

Sergeant Scott Kennedy of Edinburgh’s Prevention’s Interventions & Partnerships (PIP) Team said: “It’s been really encouraging to see so many organisations and groups eager to be involved and who want to help create a city free from prejudice, so we’re really looking forward to heading into the next phase.

“These projects are for the benefit of the people and communities of Edinburgh, so I’d urge residents to get involved and have their say in where this public funding goes.”

Councillor Maureen Child, Convener of the Communities and Neighbourhood Committee, said: “This is a great opportunity for local people to vote for projects that can really make a difference. There are fantastic organisations and groups throughout the city who, with a grant from a fund like this, make real strides towards an end to Islamophobia.

“Participatory budget exercises like this continue to be exceedingly popular, allowing local people to make real decisions about priority activities in their community.”

Voting is open to all people who live in Edinburgh and are aged 8 and above. Voting will open at the event and run until Monday 13 February. Details on how you can have your say can be found at www.scotland.police.uk/shared-vision-your-decision