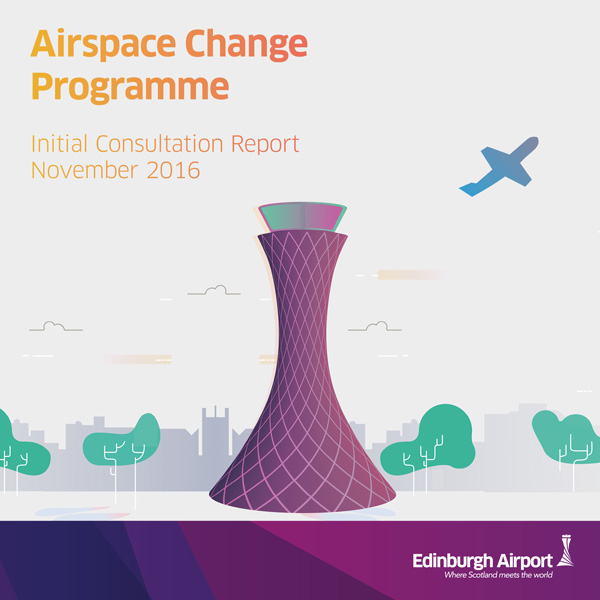 Almost 6,000 people had their say on the consultation run by Edinburgh Airport on changes they want to make to flight paths in and out of the busy transport hub.

The Airspace Change Programme initial consultation report issued today is being emailed to all those who responded and other key stakeholders. You may read it in full below.

The airport is growing and in 2014 10 million passengers flew in and out of the capital’s air hub. In 2016 it is expected to be even busier.

Gordon Dewar, Edinburgh Airport’s Chief Executive, is keen to explain how much they have been talking to locals who might be affected by any changes : “This Airspace Change Programme consultation has been a very high priority since it began in June. We have gone over and above and what any other UK airport has done in terms of reaching out and listening to our neighbouring communities.”

“Meeting and listening to people in our neighbouring communities has been an invaluable exercise for us; we have learned a lot about their hopes and concerns are in regards to the growth and development of Edinburgh Airport.

“We’ve run an open and transparent process which has been independently audited by The Consultation Institute who assessed the process as ‘Good Practice’.

“We have also consulted with stakeholders across a wide spectrum of public and private sectors, encouraging people to engage with us and respond to our consultation question, “What local factors should be taken into account when determining the position of the route within the design envelope given the potential impacts, and why?

“During the initial consultation we received a total of 5,880 responses; 89 from stakeholders and 5,791 from members of the public. I’m encouraged with that public response which is detailed in the report.

“The report does not put forward our response to the consultation. Instead, it describes what we did to highlight this initial public consultation and what the public, organisations and elected representatives told us.

“We will be presenting our design options – in part guided by the findings of this initial consultation – and beginning a second consultation in early 2017.”

Perhaps most interesting is the level of engagement that the consultation provoked among those elected to represent us: