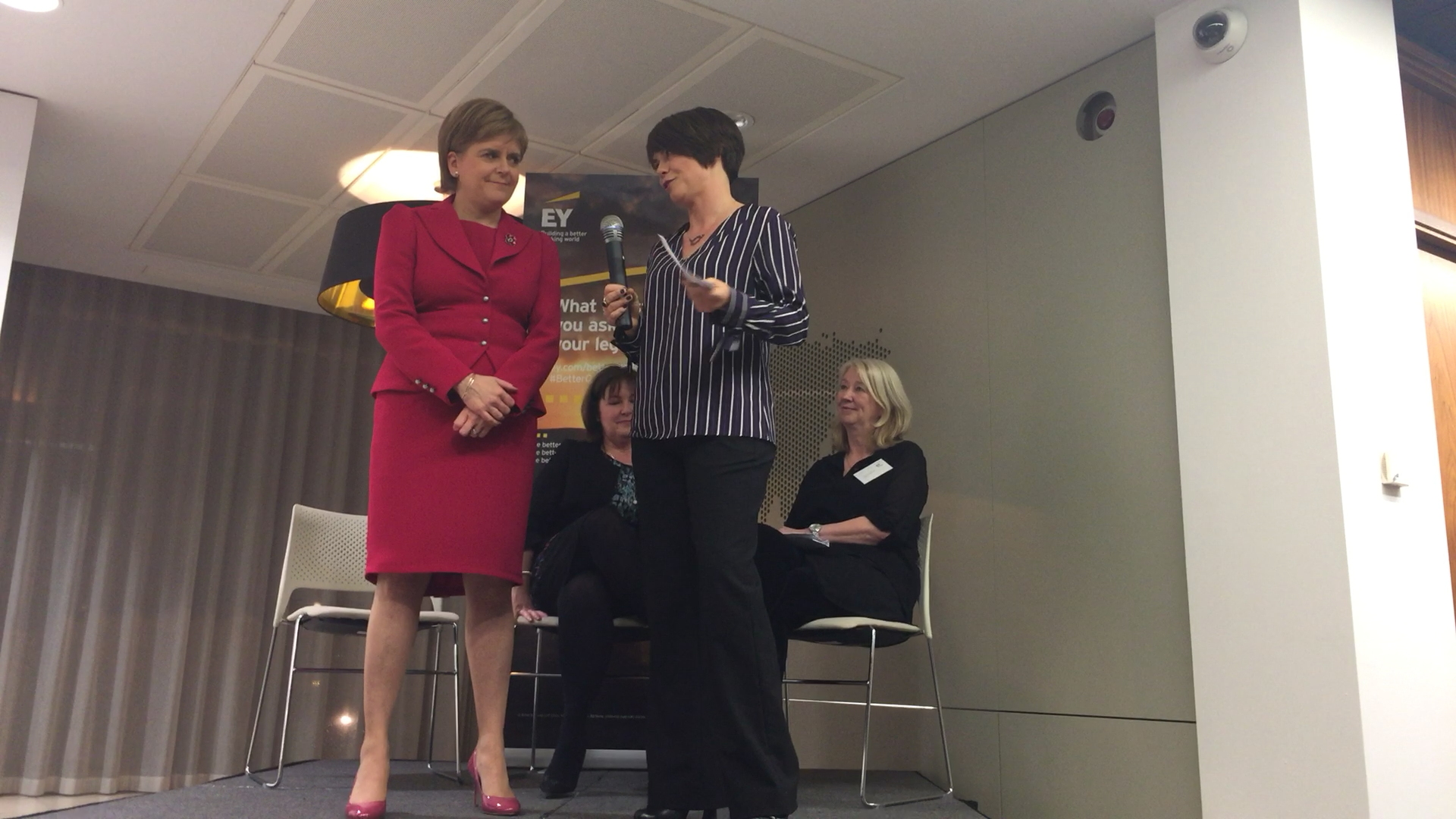 A new journalism group was launched yesterday in Glasgow by the First Minister, the Rt Hon Nicola Sturgeon.

Women in Journalism Scotland is a networking organisation which will have campaigning and training events for women journalists at all levels. Following the packed out free launch event they have opened membership to all women journalists in Scotland who work in broadcast, the written media or in the new media. It is a sister organisation to Women in Journalism which holds monthly meetings in London and which was set up almost 25 years ago.

The common denominator among three of the women on the panel last night is that the First Minister, Tricia Nelson a partner in accountancy firm EY (our hosts for the evening)  and Shelley Jofre from the BBC all attended the same school in Ayrshire. (‘the Eton of Ayrshire’). To much laughter the First Minister explained that in fact the other two were in the year above her at school!

Using that network of ‘people you know’ the launch party was held in EY’s city centre offices and the guest of honour was The First Minister.There was yet another link between them in that the young Nicola became a member of the SNP when she helped Shelley’s mum campaign in Ayrshire. All of these links, and the fact that they are all, rather obviously, women, brought them together last night.

The women in attendance came from all walks of journalism, at all stages and the buzz in the air was tangible, and went on long after the expected 9.00pm finish.

Shelley explained that she has had a 25 year career in journalism during which she has experienced sexism, faced redundancy and fairly recently found out that she was being paid less than men doing a similar job. She explained part of the reason for backing the new group: “I  want to know what we can all do together to change the situation that some women find themselves in. We are bowled over by the response, We did not expect it. We even had a waiting list for tickets for tonight. “

The First Minister said that she finds there is still a minority of women political journalists in Scotland. She explained that looking at the press benches during FMQs the overwhelming majority seated there is made up of men. She said: “The relationship between politics and journalism is thus dominated by white middle-aged men which has an impact on how women in politics are reported.

“One example I have been using recently is when Theresa May came to Bute House to see me after she had been declared Prime Minister. It was an important event and photo opportunity.

“The first version of that photo I saw on social media after the meeting was a photo of both of us from the knees down. So it was a photo of our shoes. I don’t really think that the first thing that should be said about such an important meeting is about our shoes, but don’t get me wrong – I really like shoes!

“But these things are all interlinked. It is about all women from all walks of life helping each other. I do try to use my experience to help other women and I think it is incumbent on us to reach out to other women in our professions.”

She explained that while she is in favour of positive discrimination, she hopes that it will be a temporary thing and that gender balance will be corrected in time. But she also explained that anyone appointed still has to be given a position based on merit too. Having appointed the 50:50 Cabinet just after her appointment as First Minister, her judgement was questioned by people asking how she knew that the women would be up to the job. Not one however asked about the men.

The First Minister speaking at the launch event for Women in Journalism from Phyllis Stephen on Vimeo.

Fiona Davidson is joint secretary of the NUJ in Scotland and as part of the panel she explained that the challenges facing women journalists make up a long list, but include matters such as equal pay, discrimination of various kinds. She also gave specific mention to  freelancers who can feel isolated and their work situation which is a precarious one.

Tricia Nelson was the third member of the panel. Tricia is a partner in accountancy firm EY who kindly hosted the evening. EY mentor and help women who work in their organisation to find better ways of working, for example after maternity leave. She is no stranger to journalism herself, having been a part of Harpies and Quines along with Lesley Riddoch in the early nineties, but she particulary wanted to be in at the beginning of Women in Journalism Scotland as she explained to The Edinburgh Reporter that she knows from her own business how important such ‘networking’ organisations are.