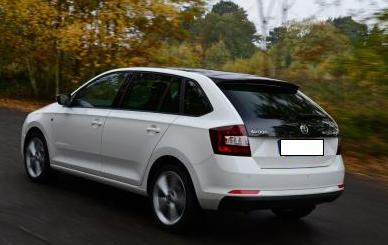 Police investigating a serious assault in the city centre have issued photos of a vehicle they are keen to trace the movements of.

The suspects arrived in a white Skoda Rapid bearing the false plates DX65 ZWL that travelled towards Regent Road after the assault.

The vehicle was later abandoned and set on fire in Bingham Drive near to the Niddrie burn. Three men were seen to run off from the vehicle.

From enquiries it has been established that the vehicle was in Lutton Place in Newington on the morning of the assault and at Duddingston Row shortly before it took place.

The first suspect is described as around 6ft, wearing a yellow cycling top, black cap and sunglasses.

The second suspect is described as around 5ft 6in – 5ft 8in, wearing a blue cycling top, black cap and sunglasses.

The only description available for the third suspect is he had short dark hair and was wearing a yellow top.

Police will be conducting enquiries in Waterloo Place at lunchtime today to trace further witnesses.

Detective Inspector Grant Johnston, of Gayfield CID, said: “We’re appealing for anyone who witnessed the event in Waterloo Place, or saw the vehicle before or after the event to get in touch.

“It is a distinctive vehicle and I’m hoping that the pictures may jog someone’s memory about seeing the vehicle, perhaps in unusual or suspicious circumstances, last Wednesday morning or around the time of the incident.”