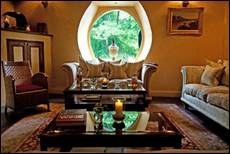 The Horseshoe Restaurant and Rooms looked like something from Tolkien’s Hobbit as it appeared out of the darkness on our afternoon approach on a chilly January day. The building was originally built as a blacksmith’s smiddy and has large, round windows which glow softly into the night to welcome its travellers.

Arriving a couple of hours before our dinner reservation, we were greeted warmly at reception and escorted out to the Lodge, a separate building at the back of the property, where the eight guest rooms are located. A teapot, selection of teas and coffee, fresh milk and fresh-baked cake awaited us,  a thoughtful and welcome treat after our journey down. The room was clean and orderly and tastefully decorated, with plenty of hanging space in the wardrobe and the essential fluffy robes.

We had been informed that we should arrive at reception half an hour before our meal. We were shown to the lounge area in the bar, which was cosy with candlelight and a glowing fire, set to the quiet tinkle of background piano music.

The wine list was extensive (it is highly commended by the AA Restaurant Guide), grouped by grape variety, and had helpful guide notes. We opted for the Chef’s Aperitif with canapes, knowing we would be getting the wine pairing with our meal.

Tangy-sweet traditional lemonade was served up alongside two beautifully presented appetiser platters featuring a mushroom cream, brown shrimps, pheasant sausage and an anchovy fritter (batter-free for me, still delicious). If the flavour of these four little delights was anything to go by, we knew we would be in for a treat with the six-course tasting menu created by Head Chef, Alistair Craig. Once seated in the restaurant we were quickly brought a substantial cut of home-rolled butter flaked with sea salt, and the most convincing gluten-free loaf I have had the pleasure of eating. The attention to quality here, as with all the dishes, was exceptional. Having been informed of my gluten-free diet in advance, the chef was well-prepared. The whole menu was gluten-free in fact. (We asked for more bread after swallowing the first few slices almost whole!) Light, airy and peppered with pumpkin seeds – this bread was unlike any other gluten-free I have tried and my partner (a gluten eater) couldn’t get enough either.

The setting was intimate, elegant, yet relaxed enough that we fell into easy conversation and forgot about the other diners. Seating only fourteen, the restaurant keeps its numbers small to allow the chef to focus on getting the best from the locally sourced produce for the impassioned diners.

Starting with a smoked salmon tartare with yoghurt and oats, before a fresh crab salad starter, adorned with pickled cucumber, the chef was keeping it clean and fresh. He was clearly preparing the palate for the delight that was to come.

Next up, the pumpkin risotto – and it was champion risotto! Creamy, savoury, slightly sweet and incredible moreish, it was hard to take our time with this one. Bright orange in colour and topped with glistening daubs of beer-vinegar jelly and shaved parmesan. The risotto alone was heavenly – but take a bite topped with that marvellous little morsel – and I challenge you not to dissolve into a puddle of pure, unadulterated joy.

The wines were excellently well-paired and every dish became more varied in the depth of flavour as we sipped. Presented by the general manager, Mark Slaney, who is clearly enthusiastic about the production of each wine – he informed us about each region and why it was selected (no surprise as he has worked in five-star hotels and Michelin Restaurants for thirty years). The wines were absolutely essential to the meal as they added another lip-smacking dimension to every mouthful. Mark has 30 years of experience so really knows his stuff, but he was formerly a commercial wine buyer and wrote a book on the subject (‘Tasting Notes’).

Courses which followed were halibut with chickpeas and chorizo, with roast breast and confit leg of Mallard duck. We were not of the same opinion about the halibut – cooked to perfection and presented on a bed of chickpeas and fried chorizo, it was “too plain” for my partner, but for me it was the simplicity of the execution that allowed the fish to truly shine.

The wine lifted the salty kick from the chorizo beautifully. The duck was just what it should be – rich in flavour and melt-in-the-mouth in texture. Beautifully complemented by the dark, syrupy cherries and tangy pickled cabbage. The Cabernet Sauvignon which accompanied the dish started off a bit on the woody side for me, but it quickly mellowed into a deep sweetness that brought out the richness of the dish.

On to the cheese – and more of that fabulous bread. A hearty goats cheese for me: with honey and pickled walnuts; and a strong cheddar for the other half –both of which went equally, and unsurprisingly, well with the two very different flavours and textures.

A decadent baked chocolate mousse finished our meal. The sharp tang of high-quality cacao was balanced with the gooey, toffee-like centre. We were served a sharp cleansing sorbet  between mouthfuls. The dessert wine was too sweet for me (most are) however my partner with his sweet tooth very much enjoyed it and thought it eased the sharpness of the chocolate.

Full to bursting, it was on to coffee and petit fours to undo some of the (good) damage from the six wines. Beautifully presented and just three mouthfuls: the perfect amount.

After a restful sleep on our duck-down bed, we awoke feeling surprisingly fresh (not a smidge of a headache – a nod to the wine) and ready for a cup of tea. Neither of us was feeling remotely hungry however a perusal of the complimentary breakfast menu tempted our taste buds at the thought of fresh-squeezed orange juice and crispy bacon. We started with juice and yoghurt for me, granola and tea for him. More lovely gluten-free bread, toasted and smothered with butter, was munched before settling down to a hearty plate of bacon, eggs, mushrooms, beans, sausage and black pudding.

The staff could not have been friendlier or more attentive and the food was superb. This kind of quality would only be found in the likes of Martin Wishart or Castle Terrace in Edinburgh’s City Centre – and for a much higher price.

If you want a true fine-dining experience, where you can also stop for the night in style, then the Horseshoe is the place to go.