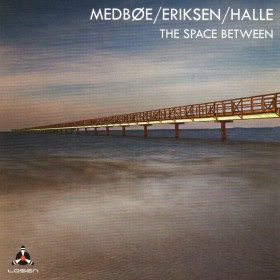 The Space Between (2015 Losen Records)

Originally from Norway, Haftor Medboe has made his home in Edinburgh, he’s Jazz Musician in Residence at the city’s Napier University and actively participates in Scotland’s ever expanding Jazz scene. I’ve known Haftor as long as I’ve stayed in Edinburgh and I’ve always paid attention to his projects, because I’ve learned that he is never involved in anything lass than brilliant and inspiring and ‘The Space Between’ is no exception.

So, speaking to Haftor about the project I asked him how it all began?

Haftor said : “I’d  originally played with Espen Eriksen (Piano) & Gunnar Halle (Trumpet) and two Danish singers in 2012 and with the help of Expo Funding I arranged for Espen and Gunnar to play with me at the 2013 Edinburgh Jazz Festival, where we had so much fun and had an obvious chemistry that I really wanted to keep things going.”

The reviews for this spirit and originality saw them inspire everyone they played to, so they were asked to return to the Festival in 2015 again to more fantastic reviews and even more accolades.

“So this time I really had to record something so I organised a time for recording and in a state of abject panic gave myself a week to write the tunes. I must admit I spent a month panicking with no writing.”

“I suppose I wanted the challenge of writing with no Bass or Drums and I wanted to produce, tunes that you could whistle, sing-able, no not sing-along, but melodies, and not set in the normal Jazz workings. I really wanted to explore the idea of space. Musical space that you don’t always get with the standard instrumental line-ups, so the ‘The Space Between’”

“So with it all written, we had some rehearsal time in Oslo, one gig then off to Pencaitland for two days recording, which was freezing!”

Well the temperature didn’t affect the quality, this album is simply quite stunning and one of the most beautiful pieces of music you will hear in a long time.

It starts with ‘East Pier”, which is a simple evocation of the view from St Monan’s Pier looking out to sea, where there’s nothing until you hit Norway. This track lets you drift away on a beautiful melody, with enough space around it to really hear it. Then you’re on “Bell Rock”, a spiraling melody that sits on top of a simple piano motif that emphasise the beauty of the tune, again simple and all it needs.

For me the highlight track is “Fladen” where we hear Haftor intermingling with piano and trumpet, simple and beautiful. The final track had me wondering what the title was all about, so I had to ask and I must admit it had me laughing.

“No we got into an argument while recording as to who was the most Viking? Now I’m half Danish so it had to be discussed and that turned into a harmonious discussion in the studio.”

What about the other titles that had me laughing as well?

“Well I started looking at a fishing maps and I just read the names out in the space between the East Pier and Norway and that was the names.”

I suppose the titles had to be simple and well thought out too and that sums up the whole album, a definite musical space between genres and something you’ll be whistling along to before you know it.

If you want to see Haftor, Espen & Gunnar they’ll be appearing at The Edinburgh Jazz Festival in July and at the Islay Jazz Festival in September. They also have some dates in Norway later this year.