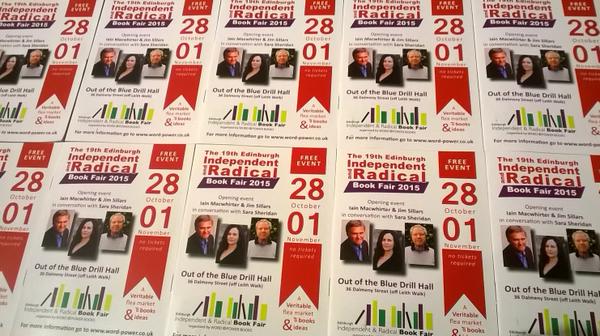 From Romeo and Juliet in Palestine to Travels in North Korea, the 2015 Edinburgh Independent and Radical Book Fair journeys far and wide. This alternative festival, organised by Word Power Books and encompassing bookstalls, an exhibition, a cafe/bar and over 25 free events, begins on Wednesday 28 October 2015 at Out of the Blue Drill Hall in Dalmeny Street.

Tom Sperlinger taught English at Al-Quds University in the Occupied West Bank; he’ll be in conversation with author Sarah Irving, discussing how his students read works from Hamlet to Malcolm X. Meanwhile Robin Tudge, a contributor to the pioneering Bradt Guide to North Korea, will present an illustrated talk on his many visits to this secretive country and how much one can see beyond the Potemkin illusion. Other sessions will cover – in fiction and in fact – Afghanistan, Africa and the Arctic.

The festival won’t neglect Scotland either; Iain Macwhirter, Jim Sillars and Sarah Sheridan will open proceedings with What Lies Ahead for Scotland? In The Bonniest Companie, poet Kathleen Jamie will examine her native land, whilst Andy Wightman (The Poor Had No Lawyers: Who Owns Scotland and How They Got It) and Fi Martynoga (A Handbook of Scotland’s Coasts) will look at The Treasures of Scotland’s Coastline.

You can’t have a radical book fair without any radicalism; how about Militant Anti-Fascism: 100 Years of Resistance? Blogger Malatesta has been analysing the fortunes of the British far right since 2009 – now he’s asking whether neo-nazis have become irrelevant when compared to the real problems faced by the working class in the name of austerity. Alastair McIntosh and Mark Boyle will lead a session on What Sustains Our Activism – and how to create a world worth sustaining – and Lisa McKenzie, who lived on the St Ann’s estate in Nottingham for over 20 years, will introduce her book Getting By: Estates, Class and Culture in Austerity Britain.

You can never have enough books – but if you need a short interlude, the festival has films and drama too. Daughters of de Beauvoir is a prize-winning documentary interweaving Simone de Beauvoir’s life with those of the women she influenced, These Dangerous Women is the Clapham Film Unit’s look at the 1915 Congress of Women, and in The Bridge, Annie George presents a solo poetic play about the life of PM John, a poet and author from pre-Independence Kerala.

What does childhood mean in Papua New Guinea? Or in the Arctic? Sue Palmer and Jay Griffiths investigate growing up in different cultures and ask why we have enclosed our children in a consumerist cornucopia but denied them the freedoms of space, time and deep play. And despite popular misconceptions, young people do read; Teen Titles is a unique book review magazine written for and by teenagers, some of whom will be at the festival to discuss what makes a good review. A creative writing workshop with author Nora Chassler (Grandmother Divided By Monkey Equals Outer Space) will follow.

These are just some of the events in a packed five day programme. You don’t need to book for any of them – just turn up – and unbelievably they are all FREE! (Donations welcome.)  Brochures are available from Word Power Books, West Nicolson Street and you can also see full details here.

‘Long live Word Power! One of Scotland’s best (and most colourful) battle-stations in the perpetual struggle against standardisation, globalisation, dumbing-down and all things bad and boring.’ (Ellen Galford).