The Guardian Edinburgh has photos from Saturday’s protests at Holyrood against library closures. On Saturday a crowd of over 100 individuals, including many famous authors, gathered to read passages from their favourite books. Authors have also created a petition which warns that funding cuts to libraries will affect the most vulnerable members of society including children and the elderly. Have a look at their Flickr Photostream here. According to The Scotsman health chiefs in Edinburgh this week said they would target NHS Lothian employees who regularly take time off work claiming illness. NHS Lothian is reported to have one of the highest sickness absence rates in Scotland, and that they could save millions of pounds a year if they could cut absence rates by just 1%. Figures are said to be worse in the dark days of January and February, and the weather has worsened the situation. Union chiefs assured workers that individuals with genuine illnesses would not be targeted in the initiative to prevent absences.

Edinburgh residents are being encouraged to walk and cycle the Union Canal route with the installation of environmentally-friendly solar lighting between Viewforth Bridge, near Edinburgh Quay, and the City Bypass at Wester Hailes. The Scotsman writes that this is part of a project to rejuvenate the canal area. British Waterways Scotland has been discussing plans with the city council along with the local communities of Longstone and Merchiston and the cycling group Spokes. It is reported that no decision has yet been made on whether or not there will be adequate funding for the project.

Edinburgh Zoo is looking at all ways to make money. You can buy your kindling or firewood from the Zoo direct….. Just click here!

If you are looking for an unusual present for a friend, a colleague or a relative did you know that you can give the gift of an exclusive tour of The National Galleries of Scotland? You can book tours for up to five people and can choose from five different themes including a tour exploring the theme of love, perfect for Valentines. Tours last one hour and must be booked at least three weeks in advance. Gift cards can be purchased from the Weston Link Info Desk, or call 0131 624 6560 9.30am-4.30pm, Monday-Friday with credit/debit card. Cost: £48. 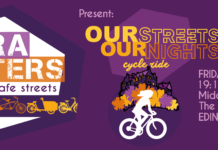