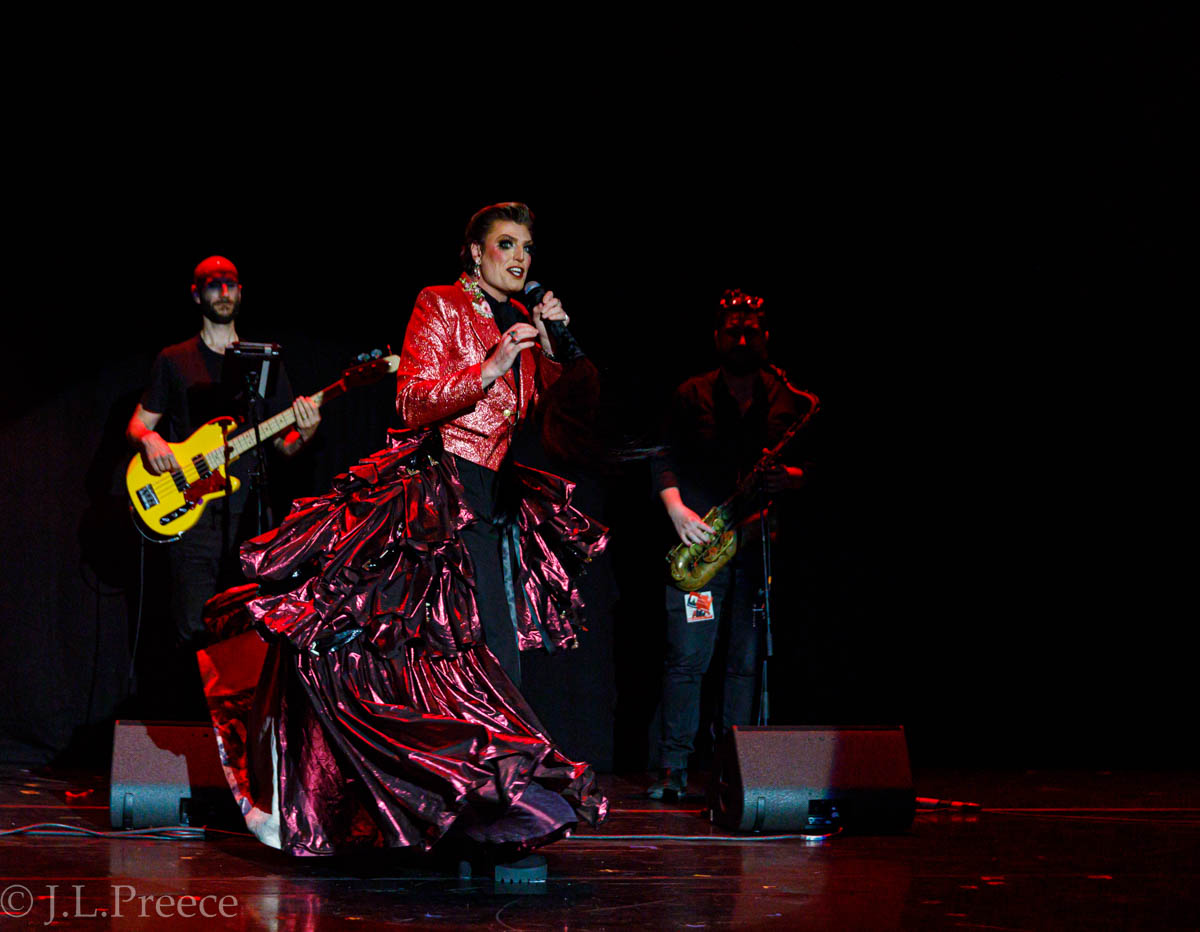 It was a rather subdued and reflective William Burdett-Coutts, the founder of Assembly, who took to the stage at the Assembly Gala launch last night.

Certainly he was less direct than MC Reuben Kaye who has clearly been storing up all his best lines for last night. If you are not too scared then if you see nothing else at the Fringe go and see Kaye in The Butch is Back to bring you up to speed on how things have been over the last two years.

Burdett-Coutts reminded the invited audience that it was 1070 days since there was last a show in the Assembly Hall which is the flagship venue for all Assembly shows. Mentioning that he along with his crew are all trying to find their feet again, he said that the crew is made up of mostly new faces and Assembly is employing around 700 people during the Fringe with over 1500 working on shows.

He also touched on the difficult relationship which both he and others have with the Fringe Society under the leadership of Shona McCarthy. He admitted that there are problems on both sides but said: “I do question 75 years on how the whole thing is going to proceed in future. We’ve got to find solutions to really tricky issues to keep this festival alive, and that’s only going to happen by people working together. The Fringe Society hasn’t really changed. It’s been going a long time, and we’re not the same event that we were. When I started 40 years ago, the Fringe was probably the size of Assembly. It’s now grown enormous into this huge, great thing. And I think it’s very hard for one organisation to be all things to all people. I think there has to be a very serious debate about how all of this works in future and how we find solutions to the problems faced by this festival.”

He promised that the audience would see a range of stellar productions which define the Fringe at the Assembly Gala. (And he was not wrong – the range of shows and the professionalism of the performers was terrific).

Burdett-Coutts explained that Assembly is part of EdFest.com where the public can upload their reviews in a kind of TripAdvisor fashion and shows can create their own pages. He said: “This will be the first really major festival since it all since it all began, I hope we can make this a celebration of a lifetime. Several things have come out of this for me. The best has been the collegiate response, of the group of venues that we’ve been working with over the last couple of years, which we’re doing under the title Edfest.com It’s very much part of the fringe, and it’s something that we operated before. We’ve expanded it to take in DanceBase Gilded Balloon, Just the Tonic, the Pleasance Summerhall Underbelly and zoom. And we’ve all collectively been helping each other, make things happen. We’ve been trying to address the issues that we all face, we’re all trying to find ways to surviving Covid has been very tough on the whole operation for everybody It has brought on enormous debt for lots of us. And we’re going to take years to build ourselves out of this hole. Working together I think is a really positive thing.”

With regard to the performers who have come back to Edinburgh his praise was fulsome. He said: “It is amazing that we have got such a stellar programme together for this festival. They don’t just come out of nowhere, they come back because they love coming to Edinburgh. They love what it represents. They love the history of it and they love the opportunity it creates and opportunity remains at the heart of it. Assembly is known and trusted for its programming. And we have some of the some of the best Edinburgh and Scottish work performing alongside their national and international peers.”

And now to the important part – the performers.

Over forty years ago, the Festival’s artistic director Burdett-Coutts programmed 57 shows at the Assembly Rooms. Since then, Assembly has provided a stage for some of the world’s hottest talent to perform. This year Assembly will present more than 200 shows in its five Festival hubs, with companies travelling from all corners of the world, including Japan, Australia, Canada, Finland, and South Africa, to perform in Edinburgh this August.

All of the Assembly shows can be seen on EdFest.com