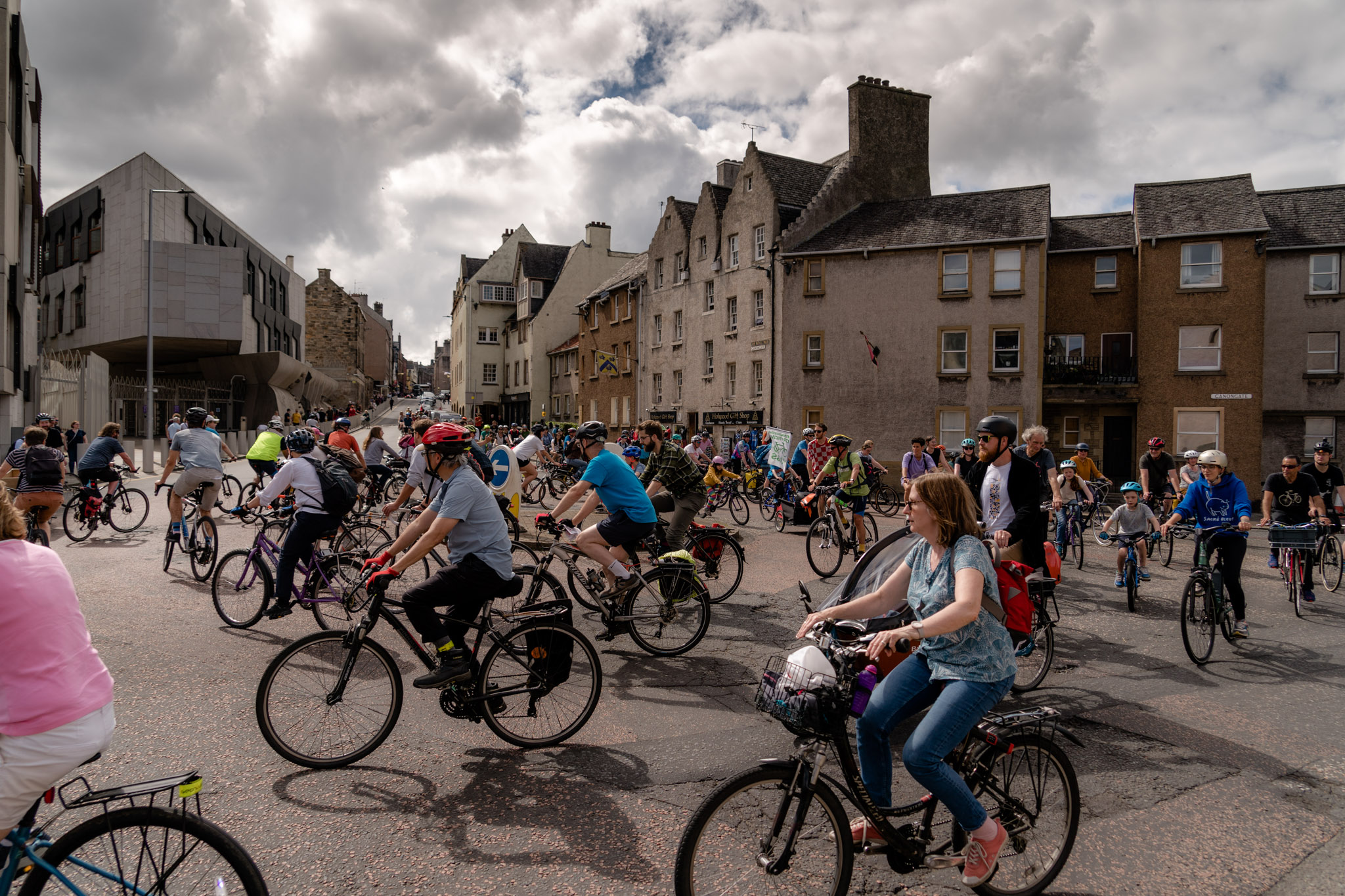 This article is contributed by Dan Abrahams who helps to organise and lead the rides in Edinburgh – complete with a trailer and a boom box. He hopes that the rides are noticed by the public in Edinburgh and that in particular the purpose of them is recognised as a positive not a negative. He writes:

Reducing greenhouse gas emissions, reducing particulate pollution, tackling obesity, improving people’s mental health, improving road safety, supporting local businesses, reducing noise pollution…a list of what cycling can do for us appears to be so long that I wonder if it would be quicker to just note the things that it can’t do. That list is fairly non-controversial too; we could pull out the evidence, reasoning, facts and figures; but common sense says that increased cycling in our cities and towns would make the world a better place in a lot of ways.

The more challenging question is: how do we achieve a major increase in cycling? Again the answer seems deceptively obvious: better bike infrastructure and fewer cars to make people feel safer cycling on the roads. After all, a Jaguar Land Rover is over 200 times heavier than a bike – no wonder people are scared. In fact, a 2019 Edinburgh survey showed that 51% of residents didn’t cycle due to safety concerns.

We all observed how during the first lockdown, the lack of cars on the road suddenly made our streets surprisingly peaceful and quiet, encouraging many people to use their bikes and many others to purchase one. But there is a better example just across the North Sea: The Netherlands – or as I like to call it, Cycling Paradise. In the Netherlands, 25% of all roads have physically segregated bike lanes, with the remaining 75% having other measures in place to provide safe cycling routes. The result? 27% of trips there are done by bicycle, rising to an incredible 60% in some cities such as Groningen. The popularity of cycling in the Netherlands has reduced deaths by 11,000 per year, and yields economic health benefits of €19 billion per year (despite the government only spending €0.5 billion on cycling infrastructure).

If we are to turn the UK into  a cycling paradise, how can we go about it? Local authorities decide whether to install bike lanes, and it’s our council tax which pays for them. But aside from voting for the most bike-friendly politicians, how can we convince them of the urgent need for bike infrastructure? And how can we show our fellow citizens how much support there is for bicycles?

Our answer: protest, activism and campaigning.

Sadly, the aforementioned bicycle-boom during the first lockdown seems to have faded from view before it even had a chance to build any momentum. However, a few folk in Edinburgh  decided to take action in the summer of 2020, inspired by the vision of a car-reduced city that the pandemic had induced. We decided to make an Edinburgh version of a movement which exists right around the world: Critical Mass.

Critical Mass is a monthly event where cyclists ride slowly around a city, taking up the as much space as is needed to keep everybody safe . It takes its name from the fact that you need a certain number of riders in order to reach the ‘critical’ condition where cars could not overtake the ‘mass’, which acts as one unit. The name could also relate to the fact that in day to day people-movement, a ‘critical mass’ of cyclists on our streets would change the way cars behaved – they could never assume that there wouldn’t be a cyclist right round every corner, and the government could not ignore the need for infrastructure.

Critical Masses around the world have their own character, some of which have been criticised for being aggressive to cars and being largely the reserve of confident male riders. In Edinburgh, we have tried to uphold a big focus on accessibility, diversity, not being aggressive to drivers, and having fun (we have a trailer which has a loudspeaker pumping out music for ‘street-party’ atmosphere). We aren’t too explicit about the motivations for the ride – everyone has slightly different reasons, but our experience from talking to people suggests that the vast majority see it as a protest for better bike infrastructure. It’s also very joyful and liberating to ‘take back the streets’ from cars, even if for a short time. You could say it’s ‘pre-figurative’ – creating the world you want to live in, just for a few hours, and showing people what that world looks like.

The Edinburgh rides have been really successful, growing from 20 people to 300 in just a few months, and generating significant media coverage. The reaction we get on rides is very positive, both from pedestrians and (most) car drivers. After all, we are only slowing them down for a few minutes at most.

It’s important to say that there are many great cycle campaigning groups in Edinburgh, Scotland and the UK. We hope that Critical Mass fills the need for  a regular, on-the-street, presence to be reckoned with, as well as a chance to bring cyclists together and reach people in person  – not just those that are  on Twitter, or the politicians who send a stock reply when you write to them.

Many people, including myself, are suffering from climate anxiety. This is a rational response to a scary state of the world, and one of the most effective ways I have found to deal with it is to take action and protest. Buying an “eco” product might give you the short-term feeling that you are doing your bit, but what we really need are urgent systematic changes. These will only come about through people taking a stand, and doing so within their communities, out on the street – which by the way is much more fun than changing which products you buy! A vast majority of people are already aware and afraid of climate change. We now need to shift the focus to the positive changes that will not only fix the climate but also make our urban landscapes more pleasant to live in.

Today: don’t get hit by a car.

This year: get your body and mind healthy by cycling regularly.

Your lifetime: fix the climate and natural world so that it is habitable for us all.

Come join us every last Saturday of the month, 2pm at Middle Meadow Walk, or search online for a Critical Mass local to you. Critical Mass Edinburgh plans to grow big in 2022, bringing thousands of people onto the street with their bikes to call for more urgent change.

The next Critical Mass cycle will take place on 27 August at 2pm.