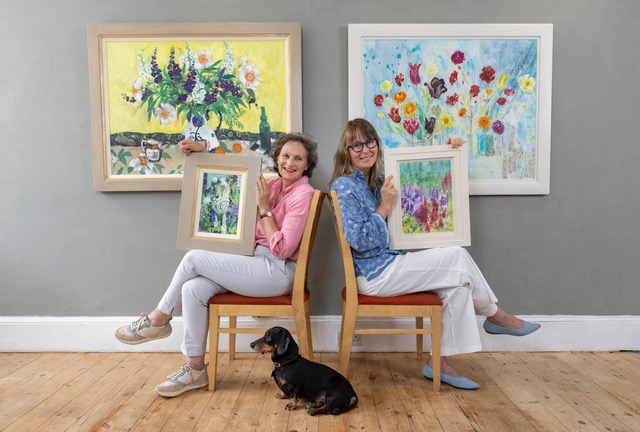 Two of Scotland’s leading painters have created a “flower-filled oasis of calm” in Edinburgh, offering visitors a moment’s peace away from the festival crowds.

Artists Ann Oram and Jenny Matthews will unveil their exhibition, ‘In The Company of Flowers’, at Edinburgh’s Union Gallery on Thursday 4 August, just as the Fringe gets underway.

Alison Auldjo, owner of the Union Gallery, said: “I like the idea of showing flowers during the festival. It will be an oasis of calm, a bit of respite from all the chaos out there.

“Ann and Jenny met more than 30 years ago, but they have never exhibited together. I’m so glad they are finally doing a show together in the city where they met. The results are well worth the wait!

“It’s easy to dismiss flower painting, but these artists as far from being hobbyists as it’s possible to get. They have more than 60 years experience between them and are absolutely at the top of their game.”

Ann and Jenny met in the 1980s when Ann, as a young tutor, taught Jenny in a drawing class at Edinburgh College of Art. Both artists have gone on to win awards for their work, and have paintings in prestigious collections at home and abroad.

Jenny said: “I still remember the class Ann taught. She encouraged us to think outside the norm about what could make a good picture and for me as a 19-year-old that was a new concept.

“I’ve followed her success over the years and I love her paintings. If somebody told me 30 years ago that I would be exhibiting with Ann Oram, I would have found that was fairly surprising!

“I’m delighted to be showing with her. The works go well together but there’s sufficient difference between the styles and it’s nice to show two interpretations of similar subjects.”

Ann Oram said: “It’s lovely to see the works together. Jenny is a watercolourist whereas I paint in oil, acrylic, watercolour and mixed media. She’s much braver than me, I like to be able to cover up my mistakes which is why I like mixed media more!”

Studying at Edinburgh College of Art just a few years apart, both artists were taught by leading Scottish artist Elizabeth Blackadder, who died a year ago, and paid tribute to her as an artist and teacher.

Ann Oram said: “I think Elizabeth instilled in me her love of still life. I loved the way she would set up groups of things to paint, random objects which looked amazing together. Whenever I doubt myself, I look at her work and reflect that it’s okay to paint in this genre.”

Jenny Matthews said it was Blackadder who inspired her to paint in watercolour. “I had been using watercolours in a very conventional way, but she used the water in a much more abstract way, playing with the pigment rather than just trying to depict something in front of her. She encouraged me to be more experimental.”

Both artists praised the work of Millpond Flower Farm in the Borders and its proprietor Paula Baxter for supplying many of the blooms painted in the show.

Jenny Matthews & Ann Oram: In the Company of Flowers, is at the Union Gallery, 4 Drumsheugh Place, EH3 7PT, 4 August – 3 September.

While at Edinburgh College of Art, Ann was taught by leading Scottish artists including Elizabeth Blackadder and John Houston. Her work continues the tradition of the Scottish Colourists with her love of vibrant colour, contrasting warm and cool tones, and the juxtaposition of daring complementary colours.  She explores a whole range of subjects including, still-life, flowers, garden, architecture and landscape.

Ann has taught as a lecturer at Edinburgh College of Art, she is a member of RSW (Royal Scottish Society of Painters of Watercolour) and has won numerous awards including in 1991 the May Marshall Brown Award (RSW) and in 1998 the William Gilles Award RSW. Her work is held in such prestigious Collections as the Bank of Scotland; Britoil, Credit Lyonnais, Edinburgh University, Robert Fleming Holdings, Royal Bank of Scotland, Stirling Art Gallery and numerous International Corporate Collections, as well as private collections worldwide. She has exhibited in leading galleries though out the UK including The Portland Gallery and the Lemon Street Gallery, Truro

Jenny Matthews was born in 1964 and grew up in Edinburgh. She studied at Edinburgh College of Art under Elizabeth Blackadder DBE and John Houston, graduating in 1986 in Drawing and Painting. She has earned her reputation as an accomplished watercolourist over the last 35 years, during which time her work has been exhibited extensively in the UK and abroad. She has exhibited at the Royal Scottish Academy (RSA), Royal Scottish Society of Painters in Watercolour (RSW) and Royal Institute of Painters in Watercolour (RI).

She has twice been a prize winner at the Royal Watercolour Society (RWS) in London and has also twice been nominated for the ‘Fabriano Watercolour’ International Biennial Prize in Italy (2016, 2022). Jenny is the leader of the Scottish group of watercolourists at the annual international watercolour convention ‘FabrianoinAcquarello’, Italy. Her paintings are in the collections of Adam and Co plc, Brodies WS, Hewlett Packard, Ian Rankin and Miranda Harvey amongst others.

Thursday in Edinburgh – what’s on today

Bold and colourful “Life Times” at the Union Gallery