Makers By Commission: an exhibition by the Scottish Furniture Makers Association featuring pieces by 25 makers, many of which are on display for the first time.  Focusing on the processes of designing and commissioning bespoke furniture, each piece has been developed with a particular place or person in mind. Many works use timber from elm trees grown on The Meadows and donated by Edinburgh City Council. 10am-4.45pm from today until 19th October 2014, John Hope Gateway, Royal Botanic Garden, Inverleith Row. Free. Golden Hare Books presents An Evening with Magnus Florin: one of Sweden’s leading writers, acclaimed poet, playwright and critic Florin will be discussing his latest novel The Garden, the first of his books to be translated into English by pioneering Edinburgh publishing house Vagabond Voices. ‘A finely wrought and and deeply researched portrait of Carl Linnaeus, one of the most eminent figures in the Swedish enlightenment, famous for his classification of animals and plants.’ 6.30-9pm, Golden Hare Books, 68 St Stephen Street, Stockbridge. Free tickets available via eventbrite. GEM: Contemporary Gemstones and Jewellery from Afghanistan. An exhibition including specially commissioned jewellery created by artists from Turquoise Mountain, a Kabul-based organisation that promotes Afghan craft and design to the wider world. These are shown alongside pieces of contemporary jewellery by UK designers, including Melanie Eddy, Vicki Sarge and Pippa Small, all of whom visited and worked at Turquoise Mountain and were inspired by Afghan design, processes and gemstone usage. 10.30am-5.30pm Monday to Saturday from today until 8th November 2014, Dovecot Studios, Infirmary Street. Exhibition originally produced as part of the British Council’s South Asia season in 2013.

Disability History Scotland: a community event and exhibition on the theme of change. The First World War gave a new identity and cultural value to those who were disabled: in the same way the outcome of the Scottish Referendum will lead to a redefinition of the people of Scotland and those from the rest of the UK. How will this affect the identity, cultural value and place in society of disabled people? Disability History Scotland invites everyone, disabled or not, to come along and talk about identity and change after the referendum. 6.30-9pm, Out of the Blue Drill Hall, 36 Dalmeny Street. 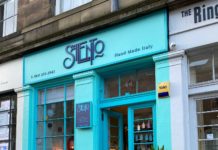 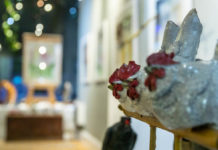 Have yourself a Crafty Little Christmas