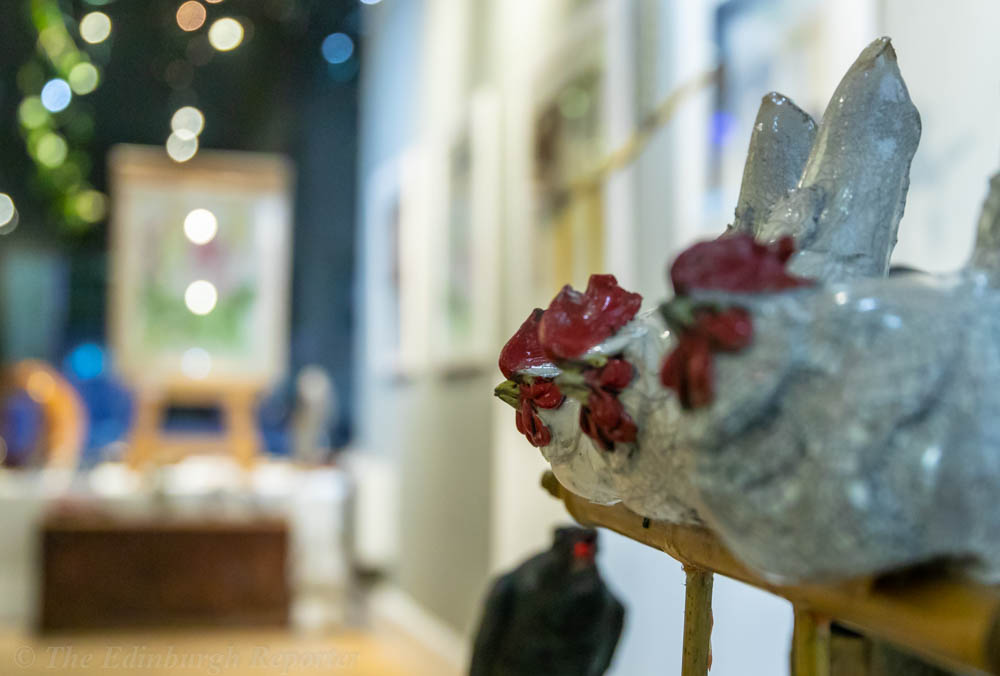 The UNIONGallery, Drumsheugh Place, has launched its Christmas exhibition with a fabulous selection of paintings, sculptures and ceramics, all of which would make excellent gifts.

Owner and manager Alison Auldjo and her partner John Downie have focused on new work by regular gallery artists to create a varied and electic show in which there really is something for everyone.

Artist and poet Pen Reid creates delicate paintings and collages of nature and what she calls ‘everyday fables’.  She also finds inspiration in the Portrait Galleries of both Edinburgh and London, and is particularly interested in the small details of paintings that are often overlooked. Spotty Dog (mixed media) was one such detail, but now he is shown in his own cameo – the only hint of the subject of the original portrait is a corner of a white dress. Spotty Dog does look quite proud of his new position.

In Deer, meanwhile, the roots of plants are shown in cross section, sheltering the sleeping deer curled up below.

In Sheep (oil on canvas) five ewes look out at us from a snow globe filled with light; outside the globe, however, the sky is dark and starry. Nature, Pen says, is so rarely shown ‘red in tooth and claw’, instead being sanitised for our consumption. Lichen (oil on panel) shows trees bare of leaves, strips of colour – pink, orange, blue and white. On closer examination figures and faces emerge, and a tiny fairy-like woman seems to float on the air.

Pen is interested in how our culture controls women. Tight, stiff clothing is just one way in which they are restricted, kept ‘in their place’; by moving these formally dressed figures to a woodland setting, she seeks both to highlight their subjugation and to liberate them into the natural environment.

Winter Doves continues this theme; here Pen has painted over an old photograph of a woman;

‘The way women were presented in those days was awful. By giving her a new blue dress, I aim to give her a new narrative.’

The woman stands in a forest; around her fly doves, birds traditionally seen as symbols of peace and love. The forest as symbol is another of Pen’s interests;

‘There is a history of the feminine connected to it in folklore and fairy tales; it interests me as place of emergence and self-discovery.’

The woman in the blue dress is stepping out into a place both unknown and full of life, into both mystery and freedom.

Another highlight of this exhibition is the work of Ian Kinnear RSW. Ian, a graduate of Duncan of Jordanstone College of Art, is a painter and ceramicist. Inspired by the gentle landscape around his studio in rural Angus, Ian’s beautiful abstracts, in soft greys, whites and browns, perfectly capture the mood of certain quiet moments in the countryside. In Appaloosa a hare stands in a pool of grey and white, while in my favourite, Poem for a Winter Garden, a shape could be a hedge or shed; in one corner a pheasant struts about looking for food. There are two shadowy pheasants in Winter Visitors; the branches are bare, a fountain or bird bath is snow-covered and frozen. The still coldness of a snowy midwinter day is almost tangible.

By contrast, Jenny Matthews’ delicate watercolours of flowers speak of summer days and brighter colours. In Red Feather, a blend of watercolour and collage, a single feather floats past a poppy, lilac sweet peas and red bellflowers.

Jenny says : ‘Flowers…are living things. In a painting, they might seem to come alive as if stirred by the slightest breeze.’

The lightness of a feather emphasises the ethereal quality of these graceful, fragile wonders of nature.

Janet Melrose RSW paints wonderful, huge, abstract watercolours inspired by her local Perthshire countryside. In Near the Pond small birds gather in a wispy tree, the bright orange sun behind it bringing to mind the Burning Bush itself, while in the more abstract Cherry Picking little blobs of black birds sit on blue and orange branches covered in berries. Red breasts, white streaks; small flashes of colour light up Watching Birds as the subjects cling to reeds at the water’s edge.

Janet works intuitively ‘in the moment, without distraction or analysis…a gentler approach which draws upon something within and without.’ As winter arrives she feels, she says, more in touch with the elements that interest her. For some of her paintings she mixes snow with watercolour, allowing it to melt and disperse the pigment.

Carol Read and Richard Ballantine’s ceramics are regular and welcome features in the gallery. Hare (raku, fired ceramic) is listening, sensing, looking into the wind, his eyes slit-like, his ears thrust back.

These artists excel at capturing animals’ characteristic movements; Boxing Hares stand upright, one with a paw planted on the other’s nose. In Summer Swallows on a Garden Sprayer one of the slim dark birds has its head tilted inquisitively. Twa Crows on Kilmartin Fence Post have pale grey, beady eyes. There are also seagulls, polar bears and a gorgeous Lying Fox; every sculpture is full of life and movement.

A sculpture of a very different kind, Old Fighter by Darrell Evans, is a battered helicopter with a chain leading down to a metal frame. Breton Hall graduate Darrell makes all of his models entirely from recycled, welded materials. Old Fighter’s ambiguous title suggests both an much-used machine and a battle-weary soldier. For those of us old enough to remember, it brings to mind the opening scene of M.A.S.H., in which a military helicopter hovers over a US Army mobile hospital in Korea. There is a great sense of poignancy in this work.

Another interesting sculpture comes from Barbara Franc. Her Fleet is a stunning horse, made from old knives, keys, wire and straws. Barbara originally studied life drawing and painting under Maggie Hambling and John Bellany, then sculpture under Avril Vellacott; since then she has had an illustrious career, exhibiting in London, Edinburgh and across the UK. She describes her work with wire and wire netting as ‘drawing in three dimensions’, and says she often gets the gem of an idea just by picking up a piece of discarded metal ‘a jam jar lid might turn into a flower head or part of a cat!’ Her models include all kinds of animals and birds, each one focusing on a creature’s shape, its sculptural form, and the way it moves and inhabits its environment.

Frank McNab’s mesmerising oil paintings are full of atmosphere. In The Cloths of Heaven a puddled track leads to a farmhouse half-obscured by mist. This slightly sinister air is even more evident in Dancing Close; a couple dance beside a deserted staircase, a letter and envelope discarded on the steps. What did the letter say, and why has it been carelessly tossed aside? By the Bonnie Banks of the Clyde shows the same couple outside the door of a tenement flat. He turns the key in the lock while she stands, almost nonchalantly, aside – then we see the guns in her hands. Glasgow-based McNab is interested in the idea of ‘a space which is neither ‘inside’ nor ‘outside’. He finds people’s behaviour as they pass one another on the tenement stairs intriguing;

‘The imagination takes us anywhere and populates our world with extraordinary visions, even when we are just coming home with the messages.’

The paintings reflect the stories we make up about the unknown people around us – whether those stories are true is something we will probably never know.

Returning to the natural world, Hazel Cashmore’s Receding Water, First Sign of Spring  shows reeds reflected in white/grey water, with marshland spreading out behind towards misty mountains. The blue-tinged mountains in That Highland Feeling overlook a foreground of soft browns, greens and oranges, while the sky is a mottled blue. The remote Caithness landscape is Hazel’s home and her inspiration as she tries to capture the ever-changing light as it shifts across the land; we feel the sheer presence of the huge skies and remote moorland.

Other artists in this engaging show keep closer to the city; Lucy Jones’ mixed media and collage pictures are of New Town houses and front doors, while Rosy Barnes’ expressionistic paintings are of heather clad Salisbury Crags, shapes of houses just visible beneath the cliffs that tower above the city. Rosy, an alumna of Leith School of Art and Glasgow School of Art, says her inspirations include Frank Auerbach. Joan Eardley and El Greco. She is a member of the Naked Aye Collective.

There is so much to see and to enjoy in the UNIONGallery’s Christmas show, every piece of great quality and interest. Alison and John are to be congratulated on bringing together such a varied selection of artists and from their works creating such a cohesive and absorbing exhibition.