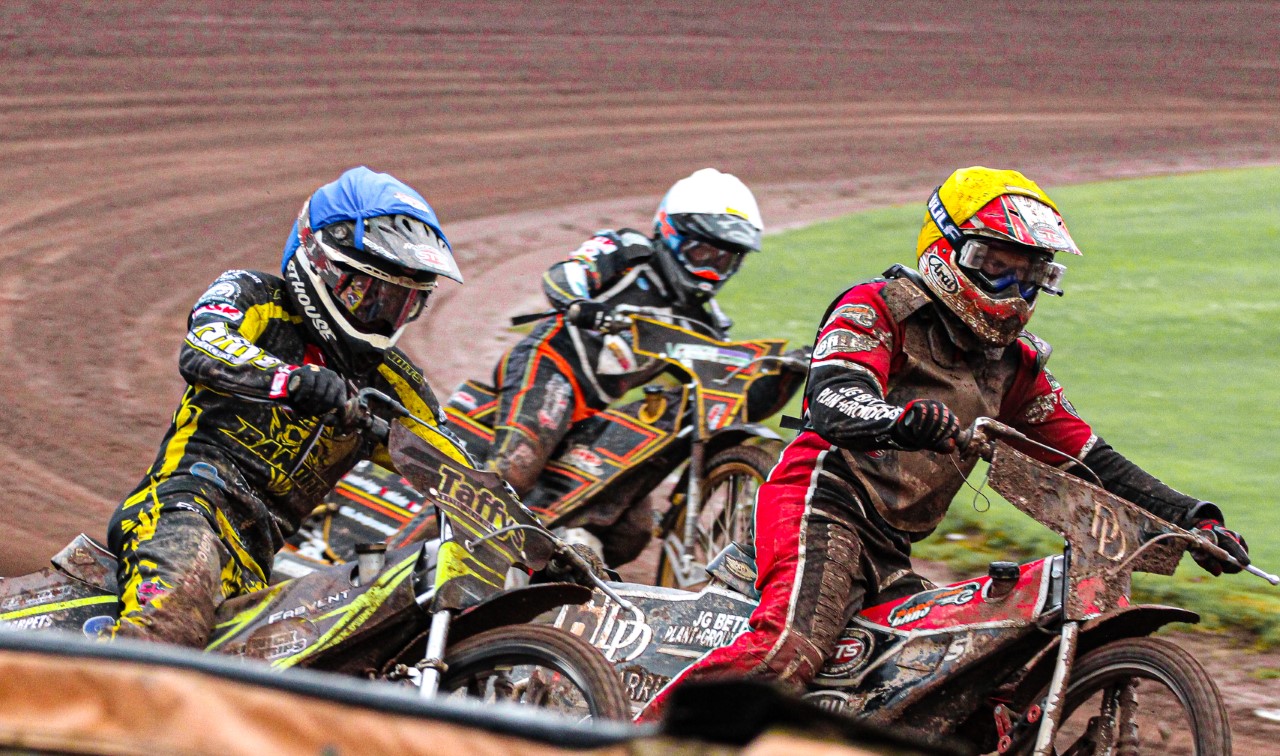 With What the Fork Edinburgh due to move to a purpose-built stadium next spring this is likely to be Berwick’s last visit to Armadale Stadium.

Like so many over the past 25 years it ended in a heavy defeat although the FTS Bandits, powered by Keenwood Karpets, at least bowed out with a heat advantage as captain Chris Harris won heat 15 in increasingly heavy rain, beating opposite number Sam Masters for the second time on the night, Leon Flint completing the 4-2.

Again it was the duo who took the challenge to the home side – with some support from reserves Jonas Knudsen and Nathan Stoneman – as the three former Monarchs – Theo Pijper, Ricky Wells and Jye Etheridge managed just five points between them from ten starts.

Berwick were a little unfortunate in heat two, Knudsen and Stoneman shooting from the gate. Jacob Hook split the Bandits pairing but when Stoneman hit the deck it was the Australian’s exclusion light which referee Willie Dishington illuminated – much to the ire of the home fans.

They were less unhappy when James Sarjeant got a characteristic flier in the rerun to ensure the points were shared.

Etheridge and Ricky Wells set the alarm bells ringing for the visiting fans as they were well off the and on the wrong end of a 5-1 in three only for the Bandits to hit straight back, British Under-19 Champions Flint storming across from the outside gate and clamping down on the home pairing.

Sarjeant fell but the race continued with Stoneman following his young team-mate home well ahead of Josh Pickering for a somewhat surprise heat maximum.

Berwick’s problems were summed up when Wells and Etheridge hit the front in heat seven only for Hook to drive through a gap between them, team-mate Pickering rounding Etheridge and then doing the same to the American on lap three.

Sarjeant was on the deck again in eight, a heat won by Knudsen who took a reserve ride for Pijper. Stoneman – sharp from the gate all night – was passed by Fredriksen in another good race.

Flint and Castagna traded places a number of times in heat eight before the Bandits’ in-form teenager secured second place behind Thomson but Harris – taking a tactical sub ride in place of Etheridge – needed to show all his track craft again in the following heat to haul in Fredriksen as Edinburgh opened up an eight-point lead.

Pickering and Harris produced the race of the night in heat 11, passing and repassing before the Australian took the flag and Knudsen again underlined his promise in 12 but with Etheridge well off the pace again Edinburgh extended their lead to ten points.

Harris finally got the win that his efforts deserved in 13, just fending off Masters in the run to the finishing pole and Edinburgh made hay in the rain as Castagna and Hook gated for another maximum in the penultimate heat leaving Harris and Flint to say Berwick’s not so fond farewell to the old stadium with a final heat flourish.

Berwick team manager Gary Flint admitted: “It was a pretty familiar story on our visits to Armadale. Even when we made the gate we left half a gap and Edinburgh were through it.

“Again I cannot really fault the effort of the guys with Nathan probably having his best showing in Berwick colours but it was another disappointing result at one of our least favourite tracks.

“Tomorrow is another night and I will be looking for a positive response from the Bandits and build up a momentum to take into Sunday’s match at Leicester.”

At Shielfield Charles Wright guests in place of Harris for the home side, Lee Complin and Kasper Andersen for the Monarchs in place of Fredriksen and Castagna, the three missing riders taking part in the European Pairs qualifier in Macon, France.