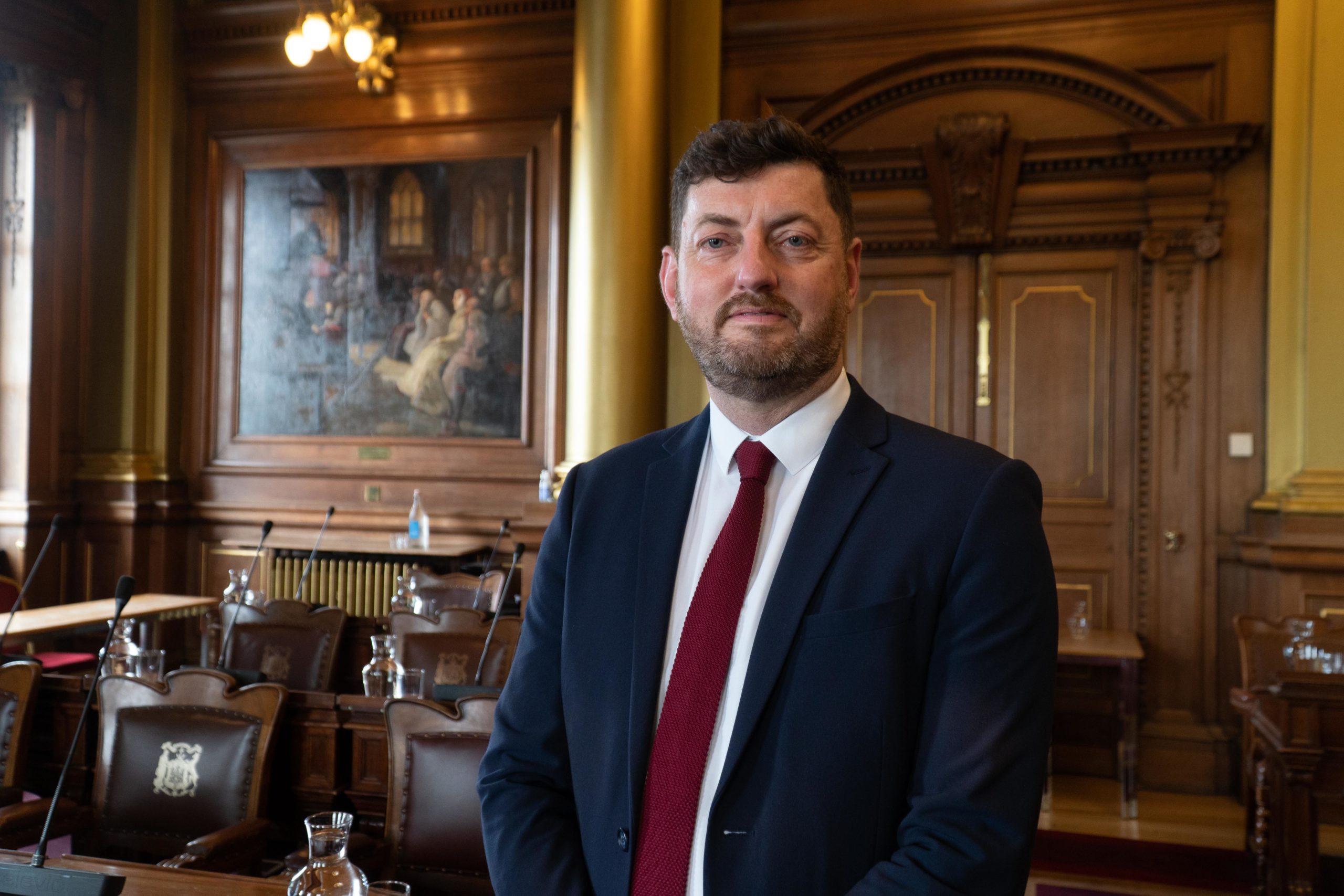 I met up with the council leader, Cllr Cammy Day, at a Jubilee event on Wednesday and we recorded the podcast episode below.

This will give you a flavour of his first week in the new role – and how he hopes matters will unfold at the City Chambers in the next five years.

There is a transcript of the conversation below.

Cllr Day said: “It’s hard work. It’s a real challenge. It’s exciting. You know, I’m proud and privileged to be the leader, in the city that I live in and have all my life. But yes, it’s hard work, it’s going to be a challenge to get decisions through the council. But I think me and my administration are keen to work with all parties.

I observed that Labour are being criticised by some commentators saying the party will always have to look to the Tories and the Lib Dems for assistance in getting any policies passed and asked Cllr Day if he agreed with that. He denied that Labour would continually go to the Liberal Democrats and Conservatives for their support.

“And the same will be happening with my Transport Convener, with my Education Convener etc etc. They’ll all be looking to have a cross party consensus on the way forward, That’s not going to happen all the time, we accept that. But I suppose our stall will be set out that we want to work cross party with whoever will support us to get the best we can. And given that the Labour group, the SNP, the Greens and Lib Dems manifestos are probably more aligned, these will be the parties that we go to.

“But I’m not going to shut out the Tories, because there’ll be some parts of their manifesto that we might support or they might support ours. So it’s a genuine approach to say, let’s get as many of the parties as we can in the council. And if some parties are not happy, don’t want to play that game, then that will be their decision, and we’ll work with other parties who are prepared to be a bit more progressive and put differences aside and get on with running the city – this capital city the best we can.”

I asked for a rundown of Cllr Day’s first week as leader of a minority coalition of just 13 councillors.

He replied:”So you know, I’d like to argue that it’s not about quantity, it’s about quality. I’ve got 13 amazing councillors, a number of them with senior roles, who will lead that portfolio for the next five years, hopefully. And as I said, work across the, across the political bounds to try and get the best.

“Some are very new, but very ambitious and very keen. And of course, they’ll do a great job. And then along the way, they might make some mistakes, and they’ll learn and do better next time. So we accept that. We’re not coming in to say we’ll be perfect. I think the Labour group’s got a long standing tradition in the chamber that they’re progressive, they will work with parties and will do what they can to be the best for the city.

“So on Thursday morning I was appointed to this role and the Lord Provost as well from the LibDem group. It was exciting because I think you know, there was there was some interest in what was being discussed behind the scenes.

“Genuinely until we sat down we probably weren’t entirely sure it was going to go through. So yeah, I am pleased with it. And then since then, it’s been a roller coaster for me in my new role as the council leader. And every day has been genuinely different and not a week into it yet. But it’s been an exciting – I speak today here at the my first official outing as the leader to the Jubilee party at Drylaw Rainbow Club. And it’s exciting to be here today. One of my many things I’ve done in the last five days or so.

“On Friday morning I was at COSLA leaders’ meeting standing up for the city arguing for more resources for Edinburgh, for a better paydeal for our workers, for the Tourist Tax to come in quicker and a better deal from the government to support the Ukrainian community here in Edinburgh.

“On Saturday. I went up the hills to clear my head and had a day out of council things but chased up some emails.

“On Sunday I was at the Kirking of the Council with some of my colleagues representing the city.

“There was a good representation across most, if not all the parties. So I hope that it’s a start about how we will work in the future. Monday, I called the first meeting with all the executive directors and leadership team and the key conveners to have a discussion about how we’ll work together, how we go forward.

“Yesterday, I spent my day at the refugee hub, talking to Ukrainian people and our officers who are supporting people who have come come through the system to get relocated into Edinburgh or into Scotland in some cases. And today, here I am at the Jubilee party at Drylaw Rainbow Club. And later on today, I’ll be down to Lothian Buses to reassure them of our commitment to keep them in public ownership. And then more events tomorrow and Friday.

“Hopefully, I’ll have Saturday off, in fact, no – I have to go to HMS Albion on Saturday morning to join the Captain to have some lunch – along with some other people I’m sure.

“So yes a full on week, one week into it, and it’s tiring, but you know, we’re excited to bring something new and I hope a different working relationship to the parties across the chamber.”