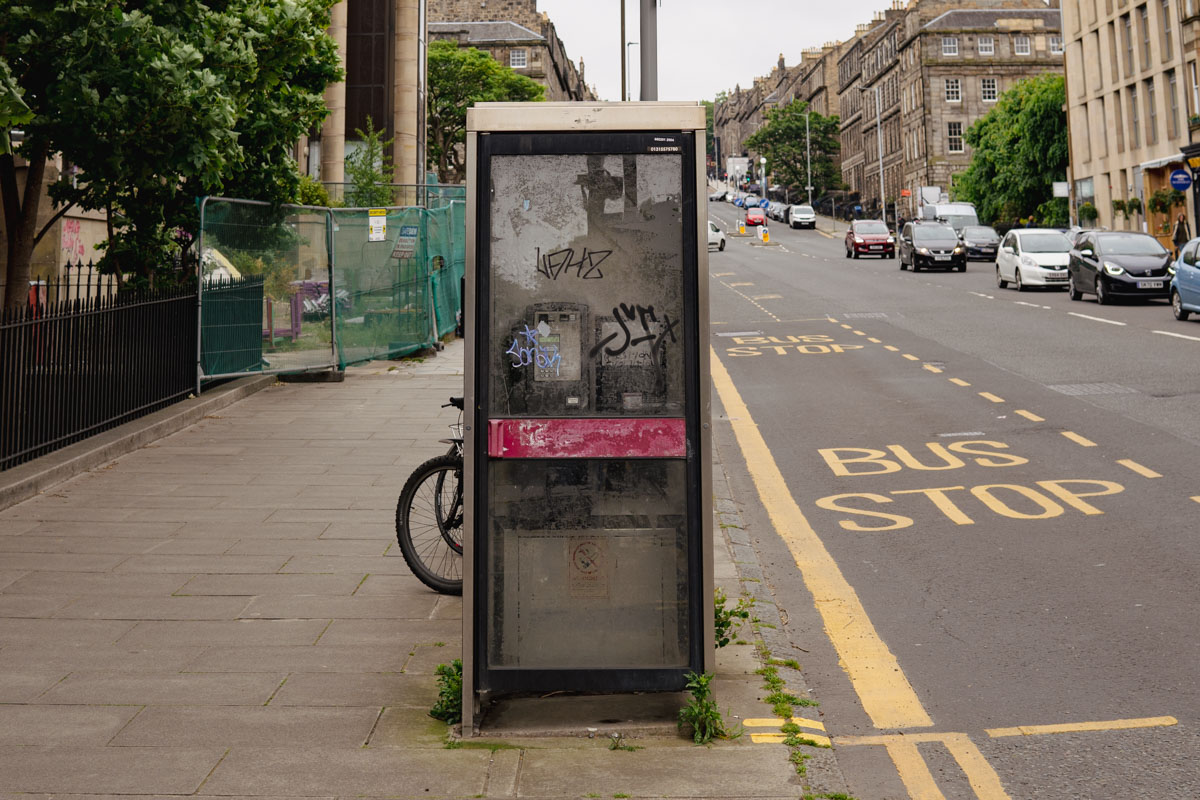 BT have applied for planning permission to remove the telephone kiosk at the foot of Dundas Street, asking the planners to allow them to replace it with one of their street hubs.

Actually the planning application 22/02528/FUL asks for permission to remove two phone boxes, but that would seem to be an error as we only found one.

A street hub is described in the accompanying leaflet as a “free to use accessible community asset”. It is an upright advertising structure which uses up much less pavement space than a phone box and gives access to free phone calls, WiFi and 999 calls as well as showing maps of the area and way finding boards. It also includes environmental sensors which measure air quality noise, and pedestrian,bike and vehicle traffic.

As well as all this it allows the council 876 hours of free advertising each year and charities can be reached through the tablet which is integrated at one metre high so that it is accessible. With a hearing induction loop and high contrast large type labels it is designed to be accessible for those who are hearing or sight impaired. There is room for a community notice board promoting events and activities and other groups such as Business Improvement Districts and Chambers of Commerce get discounted advertising rates. Business rates may be payable to the council for the structure.

Earlier this week Cllr Ross McKenzie who represents Sighthill/Gorgie explained to the Local Democracy Reporting Service that BT would not remove the dilapidated phone boxes on Dalry Road as they continue to make advertising revenue from them, despite their unsightly condition.

Local Democracy Reporter, Donald Turvill, wrote that “city planners have ruled the renewable energy-powered, 75-inch street displays would be an “unacceptable and unnecessary intrusion into the streetscape” which would result in “advertisement clutter”.

“Last month the council refused plans for the removal of 15 phone boxes and subsequent installation of seven Street Hubs across Edinburgh including the ones flagged by Cllr McKenzie on Dalry Road. Unsuccessful applications lodged by BT also related to dilapidated call boxes on Morrison Street, Nicolson Street, Dalkeith Road and Crichton Street.

“A BT spokesperson said: “We are progressing plans with Edinburgh City Council to remove around 50 payphones across the city and replace them with around 26 new BT Street Hubs which will provide local people with free Wi-Fi, free calls, free mobile charging, allow environmental monitoring and provide free digital advertising space for the council and local businesses.

“We continue to discuss our plans with the council and we hope that Edinburgh will join other cities, such as Glasgow and Birmingham, where our new Street Hubs have been welcomed by local communities and small businesses.”

So it could be unlikely that these two boxes will be removed in favour of the 21st century Street Hub unless the planners change their view.