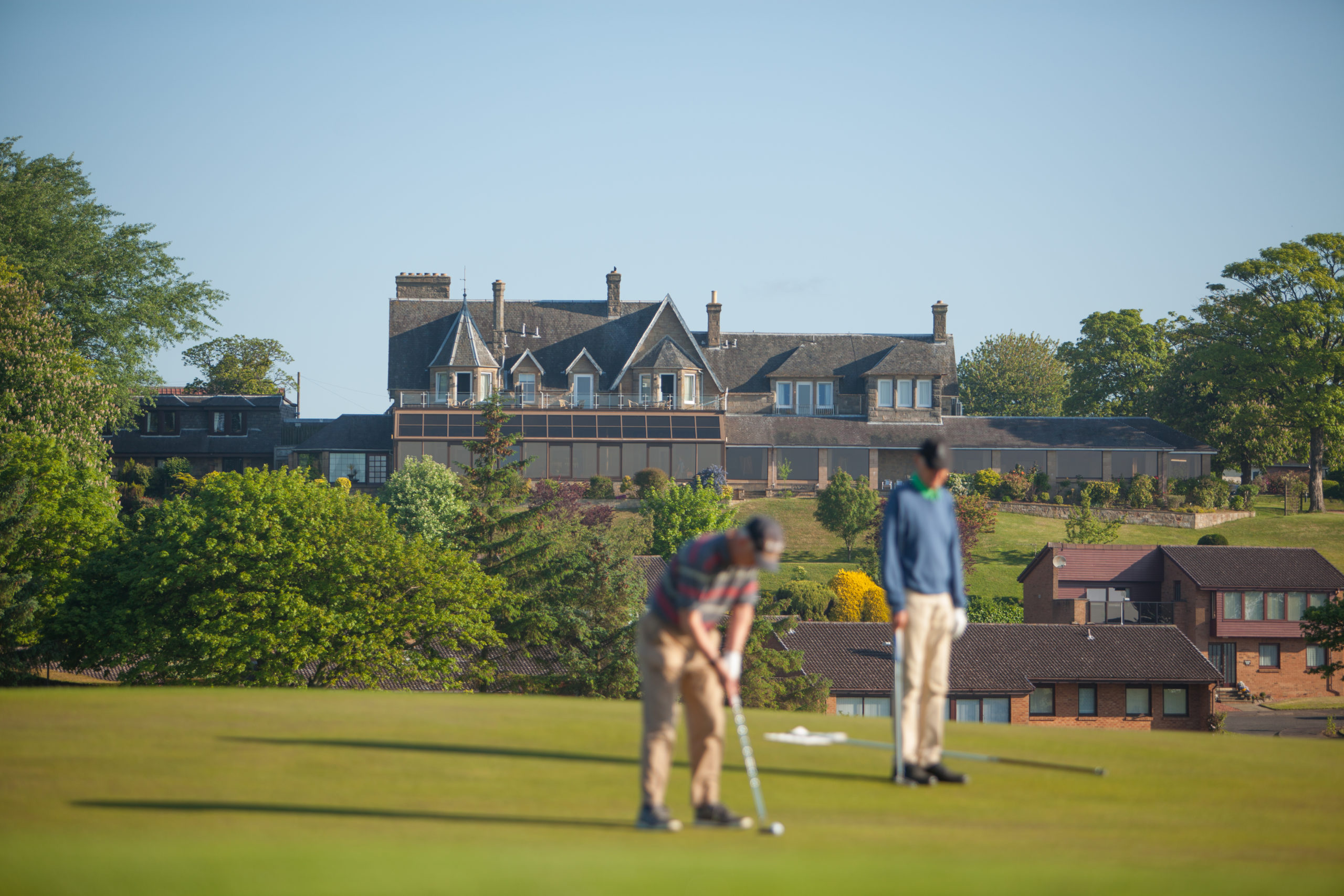 With plans to put a fresh stamp on the property, the Wallace family, owners of Pettycur Bay Holiday Park and the four star Bay Hotel, have announced their purchase of the Old Manor Hotel in Lundin Links.

The well known twenty three bedroom, 4 star property, which enjoys outstanding views over the Firth of Forth and Largo Bay, includes the Sea View Restaurant, a cocktail bar and lounge with outstanding views.  A substantial self-contained meeting & conference area, which can cater for up to 120 guests, is also part of the Hotel’s offering, situated to the side of the main Hotel, as is the former restaurant lodge building in the carpark.

Previously a 19th Century Mansion House, the imposing building, which overlooks the famous Lundin Links golf course, became a Hotel in 1994. It’s been owned for the last eleven years by Alistair Saddler who built the business up to become one of the area’s leading Hotels.

With an abundance of local knowledge on the tourism & domestic market in the area at their disposal, due to their ownership of Leven Beach Holiday Park nearby, the Wallaces are well placed to exploit the Hotel’s fantastic location, just a few miles from World Heritage East Neuk villages, and only fifteen minutes from St Andrews, which will host next year’s British Open.

Additionally, their Hotel experience at The Bay Hotel, which was added to Pettycur Bay over ten years ago, has seen the Hotel & Venue, with its eye catching architecture, thrive to become one of the area’s only four star Hotels. Having received VisitScotland recognition for the quality of its locally sourced food and drink, the Bay Hotel has a strong following in Weddings and Events, with corporate clients including NHS Fife.

Commenting on the purchase of the property, Steven Wallace, one of the Directors of Pettycur Bay Holiday Park & The Bay Hotel said: “We’re pleased and delighted to announce that we are the new owners of The Old Manor Hotel, with big plans to modernise and update the property with a full refurbishment programme kicking off straight away.”

“We want to reopen in the New Year, ready to make the most of the Spring Summer staycation season which is particularly relevant this year with the Open taking place in St Andrews later in the summer,” added Steven, who, as the grandson of Thomas Wallace, who purchased Pettycur Bay Holiday Park jointly with his two sons, Alan and Tommy, over thirty years ago, is the third generation of the family to get involved in the business.

“We’re looking for new staff straight away which we hope to recruit locally, as is the case with our other businesses,” continued Steven. “We’ve always been a big local employer, and plan to build a strong close knit team here at The Old Manor, covering reception to front of house, to housekeeping, chefs and kitchen staff.  We hope that local people in the area who are keen on a career in hospitality will want to join us in breathing new life into The Old Manor which is a beautiful building with huge potential. We aim to make it the go to place in Lundin Links for weddings, events, golfing breaks, and eating out.”

“We think this is the best, most positive news we can give our sector – and the local economy here in Lundin Links, which massively relies on tourism – as the country continues to wrestle with the pandemic,” said Steven. “The Hospitality sector is hugely important, and doing hospitality well is a source of great pride to many family businesses like ourselves,” said Steven. “We have not rested on our laurels during the pandemic, having used the time to plan and improve our offering. We opened a new restaurant at our Leven Beach Holiday Park earlier this year, to build on our reputation for great value food for locals, daytrippers and our park residents. Now we are ready to add another Hotel to the mix.”

A refurbishment programme, covering several of the Hotel’s Bedrooms at The Old Manor, which range from Twins, Doubles and Suites, was started by the previous owners, and will now be continued by the new owners.

“Our offering is strong as we have bedrooms with sea views, private balconies and outdoor seating. And of particular relevance to the wedding market is a four poster bedroom,” said Steven who will be heading up the new vision for The Old Manor as a modern, family friendly hotel.

“We are going to ensure all the accommodation is fully upgraded. It’s a question of whatever is needed will be done to do justice to the building and to the location. There’s no exact budget in mind,” said Steven.

“We have developed a distinct house style at The Bay Hotel in our mezzanine bedrooms with their breath-taking views across the Forth. These have been a huge selling point for us. We plan to make the bedrooms here equally as appealing, but a lot of the other refurbishment work needing done is that which visitors do not always see, such as the electrics & rewiring, the fire systems, kitchen equipment and so on.”

Steven also commented on the former restaurant lodge building in the car park.

“This building has huge potential for a number of uses, perhaps a stand alone fine dining restaurant, a Bistro, or for Weddings & Events,” he said. “We’re not exactly sure what we will use it for at the moment, but it is certainly an asset. All we can say is watch this space as the whole project comes together in the coming months!”

The purchase of The Old Manor Hotel, which had a guide price of £1.2 million, was concluded by commercial real estate specialists Colliers.

Commenting on the sale to the Wallace family, Robert Smithson, Associate Director in Colliers Hotels team, said: “I am pleased to have sold the hotel on behalf of the Saddlers to a local buyer who will continue to invest in the business as part of their growing leisure portfolio in the area.”

Pettycur Bay Holiday Park is shortly to feature in a new BBC series starting on 8 January 2022.