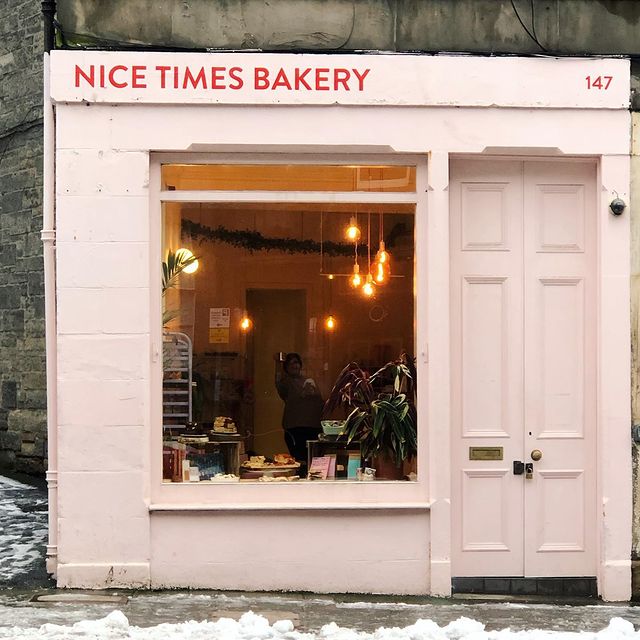 With its vibrant pink exterior,  Nice Times Bakery stands out clearly from its neighbours on Morrison Street.

It also stands out due to its excellent baking, well-crafted coffee and warm customer service. On a Saturday morning in mid-autumn Nice Times was busy, with the  smell of fried bacon wafting through, competing with  the aroma of its cracking espresso.

Using a neat hatch in the side of the shop, the business was kept going through much of the lockdown. They are now back to serving sit in and takeaway customers. The interior of the bakery is light and colourful. At full capacity they have six tables seating 12 people with plans to expand that capacity in the future.

Nice Times Bakery opened in early December 2019, the idea having been in owner Hollie’s head for 4 years before she was able to bring it to life. The space they use was previously a bakery but was “in dire need of renovation so it was a good way to bring tradition into the 21st century.  It took a good six months renovating the space to make it the beauty it is today”. Previously Hollie had been operating another café, Lovecrumbs, for eight years. She and her team opened the bakery to have more control of the variety of goods they could offer and, as barista Alyssa puts it,“be able to whip up whatever we fancy on a whim to suit our brand”.

The Nice Times team feel lucky to have such a good location given the scarcity of good commercial space in the centre of town.  In normal times, Morrison Street is a busy street with lots of offices and hotels surrounding it, making it the perfect spot for a new venture. Of course, many of these offices and hotels have been quiet during much of 2020 and 2021, though having one of the main vaccination centres just up the road (at Edinburgh International Conference Centre), helped boost footfall in the area for a few months.

Nice Times use beans roasted by Papercup Coffee, based in Glasgow (Papercup also run a very busy wee café on Great Western Road).  As Alyssa puts it, “there are a fair few Edinburgh based roasteries offering incredible beans, but we wanted to be able to offer something that isn’t available everywhere else”. In addition, “Papercup have become friends of ours throughout the years, so aside from offering outstanding beans, they are incredibly kind and easy to work with”. The roast Nice Times uses varies “depending on what Papercup is offering at any given type” but typically they use Brazilian coffees in their espresso. In the future, they hope to obtain a second grinder  set up for specialty roasts “as there are so many phenomenal places offering coffee in the UK alone”.

They focus primarily on espresso based drinks, but do also serve batch brew and are prepared to do a V60 on request.

In addition to coffee, Nice Times offer a variety of teas and hot chocolates.  Their teas are from Rosevear Tea, an Edinburgh based independent tea shop.  They have six different types of tea on offer, ranging from the classics like Breakfast Tea and Earl Grey to herbals such as Mint and Lemon and Ginger.  Their hot chocolate is from CoCo chocolatier, another Edinburgh based independent company.  Coco provide Nice Times with two custom flavours (Orange Chili and Clove and Rose and Cardamom), which were created specially for the café.  In addition, they offer chai lattes with homemade chai syrup and honey and cinnamon lattes for those craving something a little bit different.

While they are first and foremost a bakery, they do have a range of savoury options on offer. Currently, these include sausage rolls, cheese toasties, and made fresh daily focaccia. On the weekends they serve bacon rolls. Nice Times has recently expanded their savoury range to include a variety of sandwiches, soups, and other pastries.

When the first lockdown began the bakery became the baking hub for their brand new online delivery service which turned out to be “a smashing success” and is something they have have continued doing since.

Alyssa said: “We have an amazing group of regular customers who have given us steady support during this time. While it hasn’t been easy, we’ve been able to grow, adapt, and change with every new restriction and regulation and make it through.”

Given the high class coffee and baking they offer, as we return to some degree of normality Nice Times certainly deserve to flourish. The regular queues for takeaways suggest they will.

Open: Wednesday – Sundays, from 8am until 4pm