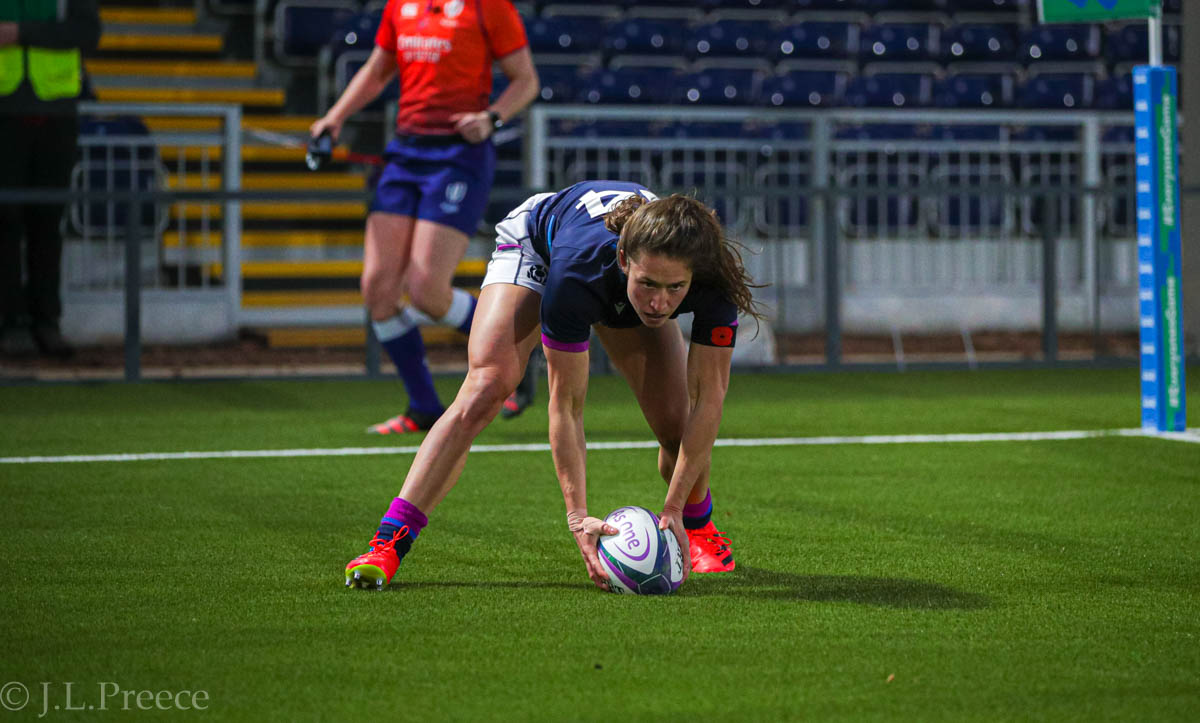 Sakura (Japan) XV were the visitors to play Scotland’s women in their, one-match, Autumn ‘series’ at the DAM Health Stadium in Edinburgh. The Scots were looking for their third consecutive International win this year, while Japan were coming off the back of a 23-5 loss to Wales.

The visitors started the better of the two sides as they retained possession and pushed the Scottish side back into their own half, but once the home side got their bigger pack on the move, play soon moved into Japan’s 22.

With the visitors now struggling to make ground, the home side set up the move which lead to the opening try.

Coming down the centre, Helen Nelson fed the ball out of a double tackle to the following Leah Bartlett, who, in turn, off-loaded from another tackle to second row, Sarah Bonar.

Bonar then fed Lisa Thomson, who then passed out to Hannah Smith. She had a virtually clear run in, however, as the defence moved across, she took no chances and slipped the ball to Rhona Lloyd who had an easy trot in for the opener (top image). Nelson failed to convert, so it was 5-0 after 12 minutes.

Just over five minutes later, as Scotland were on the attack, a high-looking tackle from Japanese lock, Yuna Sato was sent ‘upstairs’ for deliberation. When it came back to the screen the general consensus, after much debate, was that it was high and worthy of a red card. With typical Japanese courtesy, Sato bowed an apology to both the referee and her team and left the field, leaving her side a player down for the rest of the match.

With Scotland now having a 8-7 advantage in the scrum, they were able to win a penalty and Thomson sent the ball into the corner. The home side then won the line out, set up a rolling maul and dragged hooker, Lana Skeldon up to, and over, the line for the second try. Once again, Nelson failed to convert, but it was now 10-0 after 23 minutes of play.

The loss of their player, didn’t stop the visitors from roaring straight back and, after a period of to-ing and fro-ing, they forced play into Scotland’s 22. A daft penalty for interfering with a quick line out, gave the visitors a platform to attack the Scots’ line and attack they did.

Quickly moving the ball through the hands, Japan had the Scottish defence all over the place, making gaps in the line and attacking through. Their try came from the pack as, first, flanker Irocha Nagata was held up, but, playing under advantage, they set up again from the penalty and this time hooker Nijiho Nagata powered over for the try. Ai Hirayema missed the conversion but, after 35 minutes it was 10-5 to Scotland.

The period of play up to the break was then dominated by Japan and they almost scored through Seino Sato, but she was prevented from grounding the ball over the line. They weren’t finished though and, as the clock ticked past 40 minutes, a short series of rucks along the goal line gave Sachiko Kato the opportunity to dive over for the score.

Hirayama followed up with the conversion and Japan went into half time 10-12 ahead.

The second half, however, was to prove a step too far for the visitors as Scotland rallied, turned up the wick and ran in four more tries.

The first was from Megan Gaffney following on from powerful line-bending runs from Jade Konkel and Emma Wassell. The back division then made the space for Gaffney to break the line and score. Nelson then converted for 17-12 after 43 minutes.

The try was repeated three minutes later when the same players, more-or-less, combined, but this time Chloe Rollie was on the end of the ball to score. With Nelson’s conversion it was now, a healthy 24-12 lead.

Japan held out for another 10 minutes and made progress deep into the home half, but were beginning to see the threat of being a player down come into being.

Scotland’s fifth try was another back division move. As the ball was slung across the line, the final pass went to Thomson who cut back across the line and powered over for try number five. Nelson, once again, converted for 31-12 after 63 minutes.

The final score came with seven minutes left to play. The Scots broke out of defence and, initiated by debutant, Shona Campbell, flew up the pitch to put pressure right back on the Japanese defence. The final try came via a chip-and-chase from Rhona Lloyd who went over in the 73rd minute for 36-12 and the final points of the match.

Despite a late flurry from Japan, Scotland held their line and ran out 36-12 winners in the end.