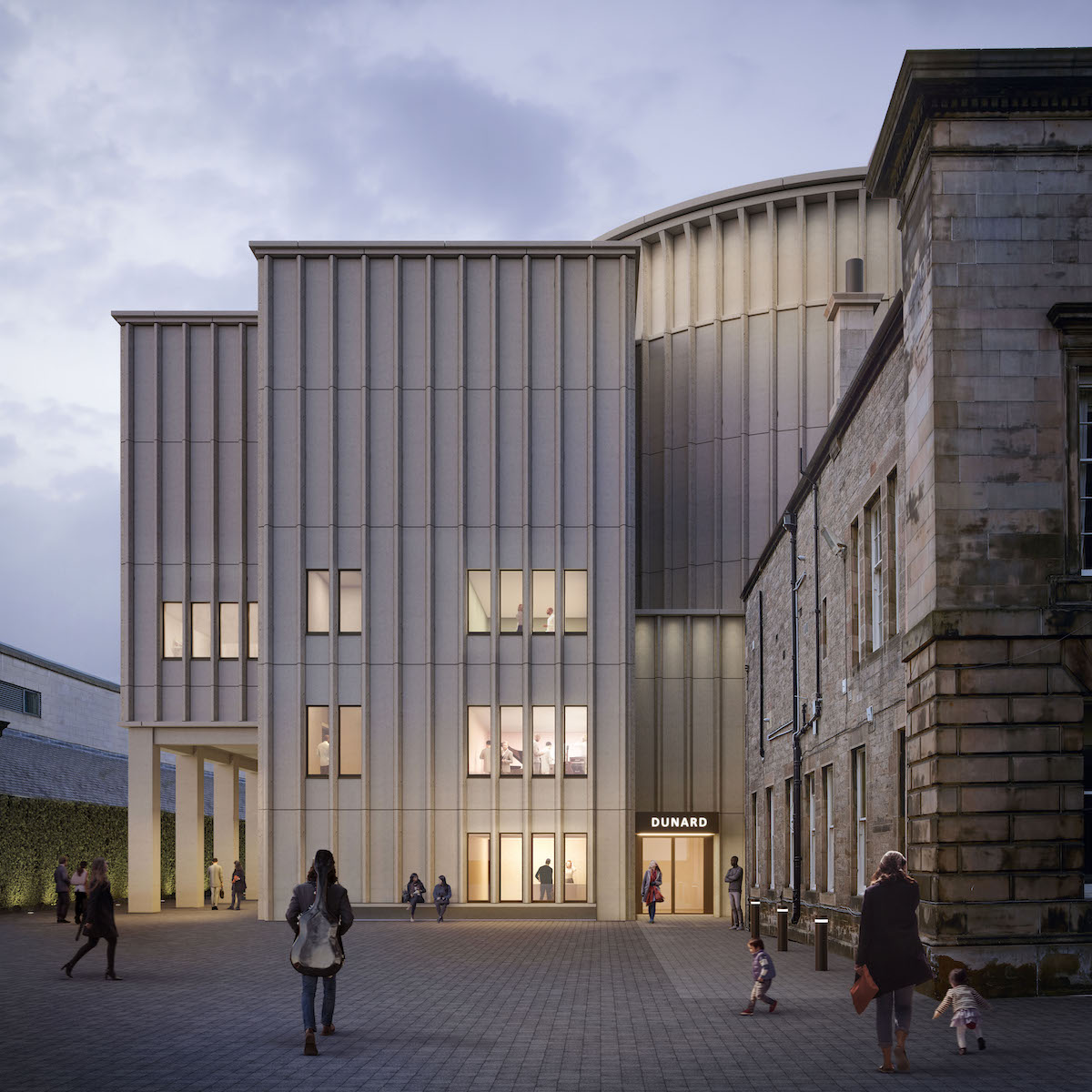 Today the council’s planning committee granted permission which will allow the first concert hall for a century to become a reality.

Earlier in the year, the Edinburgh and South East City Region Deal announced new designs for the “cultural flagship”, saying the £75 million Dunard Centre “will fill a recognised gap in the region’s cultural infrastructure and provide a platform for local, national and international musicians to perform to audiences in the very best environment”.

Part of the funding for the new concert hall is to be sourced from the City Region Deal, and some of the funding is from the Dunard Fund, a major philanthropic donor in the city under the direction of Carol Grigor.

The move to create a new concert hall is fronted by IMPACT Scotland who state that the 1000 capacity hall with its new design will have the flexibility to welcome the widest possible range of acoustic and amplified music and performance to a mid-sized venue. The exterior will reflect the surrounding neoclassical design of the New Town and will open up an undiscovered area of the city centre, linking the St James Quarter, St Andrew Square and the Register Lanes and contributing to the regeneration of the area.

The redesigned building will house:

The new building will be the permanent home of the Scottish Chamber Orchestra, and will also be used by the Festival.The promise is that a new building like this will strengthen Edinburgh as a festival city and it will be the main location for National Youth Choir Of Scotland as well as an educational hub.

Councillors listened to a long presentation earlier on Wednesday, voting seven to three in favour of the new concert hall, and heard that this site lies adjacent to city centre bars and restaurants with good public transport and active travel links.

Cllr Chas Booth asked about the way that HGVs would access the site which will have removable bollards, and also enquired about the way vehicles will use the semi circle in front of the Royal Bank of Scotland building at Dundas House. Planning officers confirmed there will be no need for the entrance gates to be widened outside the bank, although a dropped kerb will require to be formed. It was confirmed that anyone bringing HGVs onto the site will require consent of Edinburgh Trams, but that any manoeuvring would be carried out within the site itself with the help of a banksman. Vehicles will enter and exit facing forwards. Council officers said that any large vehicle movements such as trucks to bring in orchestral equipment, are envisaged by transport officers taking place early in the morning.

Cllr Jim Campbell queried the number of HGVs which would access the site, noting it is essentially a pedestrian area and asked if Health and Safety Executive had been contacted. Planning officers that would be a matter for the applicant.

Cllr Booth asked about cycle parking – 20 spaces for visitors and 10 secured cycle spaces for those who work there – with some be provided off site. He asked: “How can that be fit for purpose?” The planning officer confirmed there are five secure covered racks within the site, and 150 cycle spaces at St James Quarter. Cycle racks will be provided at the main entrance to the concert hall.

Neighbouring proprietor, Anthony Jack, said he did not object to the proposal, despite the fact that it will block light from his basement home. However, he expressed his concerns about the A listed tenement where he lives. He said: “I am concerned with the noise assessment – noise will leak out of the open north facing loading bay. It seems to underestimate the number of people who might congregate around the venue.” He also explained that there is already some noise from the temporary Bar Hutte outside St James Quarter.

Another neighbour, Miss Anderson who lives in St James Square objected to the scheme, asking if the council still had a skyline policy, saying it was already ruined it with the W Hotel. She commented that from Elder Street to James Craig Walk is no longer a green area, although originally the area around Dundas House was planned to be a garden. She explained that there are already cracks in the building where she lives. She said: “The area is only 10 yards wide yet there are plans to run events all year round. This is not the correct site for this cultural venue.”

Referring to the fact that the CEO of Edinburgh International Festival has announced he will leave at the end of the festival in 2022, she exclaimed: “Fergus Linehan will soon be long gone!”

Ms Anderson said: “The site is too constrained. Everything is going to be so enormous on such a small site. The only thing they can do is build up. They have got rid of the viewing platform and some of the windows since the last plans, but basically these are small amendments. One wonders if our building is just in the way. We have a plaque on the wall which was put there 30 years ago but there is no protection for us. Find another site which is much larger with gardens around it which people could enjoy. The whole thing is ridiculous.” She also said she is a regular at the Queen’s Hall where concerts are regularly only partly full, and she worries that the hall will lose out to the new venue.

Gavin Reid, CEO of Scottish Chamber Orchestra and co-chair of IMPACT Scotland said: “Today’s approval is tremendous news for the City and turns the ambition for a world-class centre for music and performance, into a reality. The Dunard Centre will become the new home of the Scottish Chamber Orchestra, and will be transformational. A stunning auditorium offering the very best in modern acoustics and boasting state of the art digital broadcast facilities will allow us to dream big, expand our repertoire, collaborate with ever more composers and artists, present our work innovatively, courageously and flexibly all with a new-found sense of adventure and ambition, always seeking to reach more and more people.”

Sir David Chipperfield, Principal, David Chipperfield Architects, said: “Throughout the process of developing the design of the Dunard Centre we have embraced both the qualities and the challenges of working with such an extraordinary site. Embedded in the dense area of the Registry Lanes and also on the grand civic axis with Dundas House, the project marks the pivoting point between the New Town and St. James Quarter. Our ambition is to create a building of distinction that is respectful of its complex context while establishing a significant new cultural destination and place in this wonderful city.”

The Trustees of the Dunard Fund said: “Dunard Fund’s Trustees are delighted to be major funders of this once-in-a-lifetime development of a world-class venue for rehearsal and performance of music, dance, theatre and lectures of all genres in the very heart of Edinburgh, thus cementing Scotland’s reputation on the international stage.”

Consultants Nagata Acoustics have been working with David Chipperfield Architects on the auditorium design, which will welcome acclaimed UK and international musicians from the worlds of classical, traditional, jazz, pop, world and folk music.

Nagata’s previous high-profile projects include the Walt Disney Concert Hall in Los Angeles, the Philharmonie de Paris and Elbphilharmonie in Hamburg, all venues renowned for their rich and immersive sound. David Chipperfield Architects have made their name around the world working on historic renovations and designing contemporary buildings including projects in UNESCO world heritage sites, such as the Neues Museum and James-Simon-Galerie on Berlin’s Museum Island, and the Procuratie Vecchie on St. Mark’s Square in Venice.