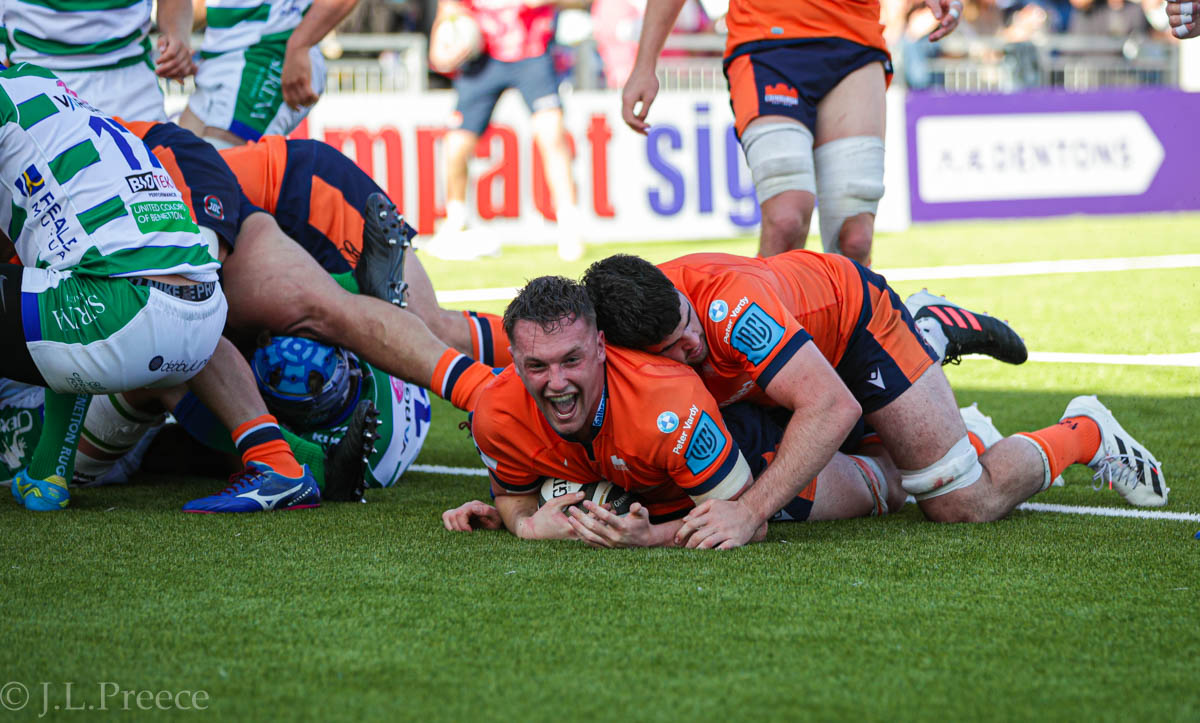 The first match, against Newcastle Falcons ended in a 10-26 defeat for the home side after looking promising early on. Edinburgh opened the scoring via a penalty, but Newcastle came back with a converted try to lead.

Edinburgh then took the lead with a converted try on the half hour mark, before Newcastle a second for the 10-12 half time lead,

Not long after the restart, Newcastle stretched their lead with a converted try for 10-19.

Despite coming close on several occasions, Newcastle romped away in the final few seconds with a pitch-length intercept try for 10-26.

The second match in the, two-match, series was against Benetton who have gone from strength to strength over the past few years shaking off their ‘easy meat’ reputation of old to the point where they won the 2020-21, end-of-season Rainbow Cup.

And they were first on the score board on Saturday as they gained an early foothold in Edinburgh’s 22, Carl Wegner scoring a 5th minute try in the corner from a powerful maul. The conversion making it 0-7.

From the restart Edinburgh’s backs got into gear and spread the ball far and wide, pushing the visitors deeper and deeper.

As the defence spread out, Edinburgh’s centres combined, with Mark Bennett going over under the posts for 5-7. Blair Kinghorn then converted for 7-7 after 10 minutes.

Three minutes later, they were up another try as new man, scrum half Ben Vellacott, chased a deep kick and managed to out-fumble the defender in the goal area for his first try for the club and 12-7.

A fair part of the next period of play was within a few metres of the Edinburgh try line as Benetton hammered away, exerting a great deal of pressure on the defence, but eventually coming away empty-handed.

However, they didn’t go completely away and, in the 26th minute, Niccolo Cannone broke through for the Italian side’s second try of the match. With Tomas Albornoz converting, Benetton were ahead at 12-14.

The next ten minutes or so were fairly even, before Albornoz slotted home a penalty for the visitors to make it 12-17.

Edinburgh continued to press and a lineout and maul near half time, saw the ball being slung out to Kinghorn who spotted Damien Hoyland free out wide. His well spotted kick was collected by the wing who trotted over for the score, Kinghorn’s conversion making the half time score 19-17 to Edinburgh.

The early second half looked ominous for the home side as Benetton latched on to an Edinburgh mistake in the first minute, with Lorenzo Cannone going over under the posts and Albornoz converting for 19-24.

However, most of the second half from there on in belonged to Edinburgh’s forwards. As the changes were rung by both sides, Edinburgh seemed to come out the better of the two as the visitors’ challenge faded a bit under the bright sun and Edinburgh’s pack went to work.

Luke Crosbie was first on the board with a try under the posts a couple of minutes later, Kinghorn converting for 26-24, with that score being followed up with the first of the season for club captain, Stuart McInally, who went over, from close in, off the back of a maul for 31-24.

The back division were allowed a short time to play, with another new signing, James Lang getting the crowd roaring him on as he broke upfield before the move was neutralised by the away defence.

It was then back to the pack for another maul/try combination as Ben Muncaster fired off the back of, another, close-in maul for 36-24, with replacement stand-off, Charlie Savala converting for 38-24.

Edinburgh were now well in control and the backs came into their own again with a finely timed passing move down the right, Hoyland finishing off with a 20+ metre sprint to the line.

With five minutes left, Benetton added to their points tally with a run-in from Tommaso Menencello who collected a loose ball to run in for 43-29.

However, Edinburgh were not to be fazed and scored another pack-driven try at the death, this time from 19 year-old hooker, Patrick Harrison. Savala then brought up the 50 with a successful conversion.

And that was that for the two-match, pre-season series at Edinburgh Rugby’s new home. Lots of new and emerging talent was on show for the first time, so, hopefully, they can carry the form shown in this match into the new – lots and lots of ‘New’ things this season – competition, the United Rugby Championship.

Let’s hope we see Edinburgh as the ‘new’ Champion club at the end of the season as the campaign gets underway next Saturday (25th Sept.) at 5:15pm.