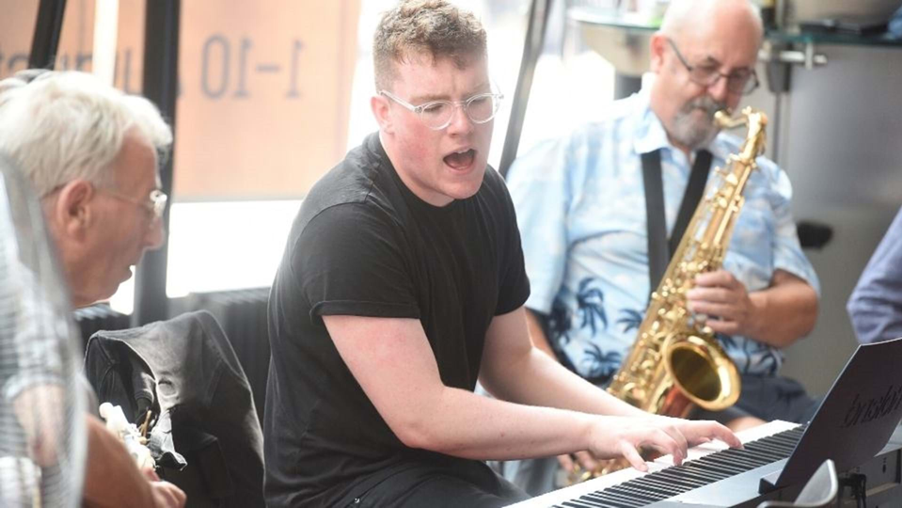 During Dementia Activism Week, Tuesday 21 September is World Alzheimer’s Day which this year has the theme Know Dementia, Know Alzheimer’s.

Capital Theatres in Edinburgh collaborate with people who have dementia or Alzheimer’s and those who care for them. This month the theatres offer the following:

Live-streamed Together In Song – a dementia-friendly concert series celebrating personal stories with songs and playlists, written, picked and performed by people with lived experience of dementia.

A dementia-friendly song-writing session called Songwriting Sprint with Gus Harrower following the theme of ‘Know Dementia, Know Alzheimer’s’.  PLWD and their families will be invited to share what they would like people to know about their experience of dementia, how they hope to combat the stigma around a diagnosis. These will then be combined and composed into a song to be performed by people living with dementia from the Forget Me Notes project.

The Satellites Performance Company, made up of people with lived experience of dementia, will release its first film.

The release of a song Trees of the Forest, written by people living with dementia with songwriter Martha Middlemiss and performed by the participants and band The Daughters. Listen on Spotify here

Both the song and a completed memory book of creative writing, poetry and visual art about theatre put together by PLWD and their families, are part of our Zoom with a View heritage reminiscence project.

Alongside the regular activities to boost stimulation, sociability and creativity such as Zoom with a View, Tea & Jam, A Brew & a Blether and afternoon tea parties with performance delivered to people’s homes.

Dawn Irvine, Creative Development Manager (Dementia Friendly Projects) said: “Our work is all about empowering participants to speak about their experience of dementia in creative, sociable and collaborative ways to reduce stigma and increase health and wellbeing. We want to acknowledge PLWD as experts in their own experience and to present opportunities to take part in creative activities that are meaningful to them. I’ve been blown away by the level of artistic ingenuity they have shown, in their writing, singing, performing and artwork showcased in the activities in this, World Alzheimer’s Month, and beyond. It has demonstrated that a dementia diagnosis doesn’t have to be the end of our cultural lives but indeed can be a catalyst for them to flourish.”

James McKillop, Participant of Capital Theatres’ Dementia Friendly Projects said: “ ‘But you can’t do that – you have dementia.’   Somehow we ignored the experts and we did do ‘that’, quite successfully. I have always argued, that people with dementia, can be quite creative. Capital Theatres thought the same, rose to the challenge, and put their heads above the parapet, to arrange and organize people with dementia, to showcase their undoubted talents.  The process has certainly raised their spirits, and increased their confidence.   We owe a lot of thanks to Capital Theatres, and everyone who participates in making our meetings so pleasurable, and teasing out our creative abilities. We’ve all gelled together seamlessly, and made new friends. Capital Theatres are trailblazers, shining a light for others to emulate. Watch us and learn, forget the myths.”

James was one of Scotland’s first Dementia Activists and this week is Scotland Dementia Activism Week with themes of celebrating what people can do. #DementiaActivismWeek

Willy Gilder, Participant of Capital Theatres’ Dementia Friendly Projects said: “I have Alzheimer’s Disease, and I think it’s time that we reconsidered how we think about ‘dementia’ and how we treat people with progressive brain disease. Forget what you think you know – I’m not ready for the PVC armchair and Vera Lynn. People with dementia, laugh and joke and paint and sing and write books. We’re ordinary people with a brain disease.” Watch Willy speaking about Alzheimer’s below: