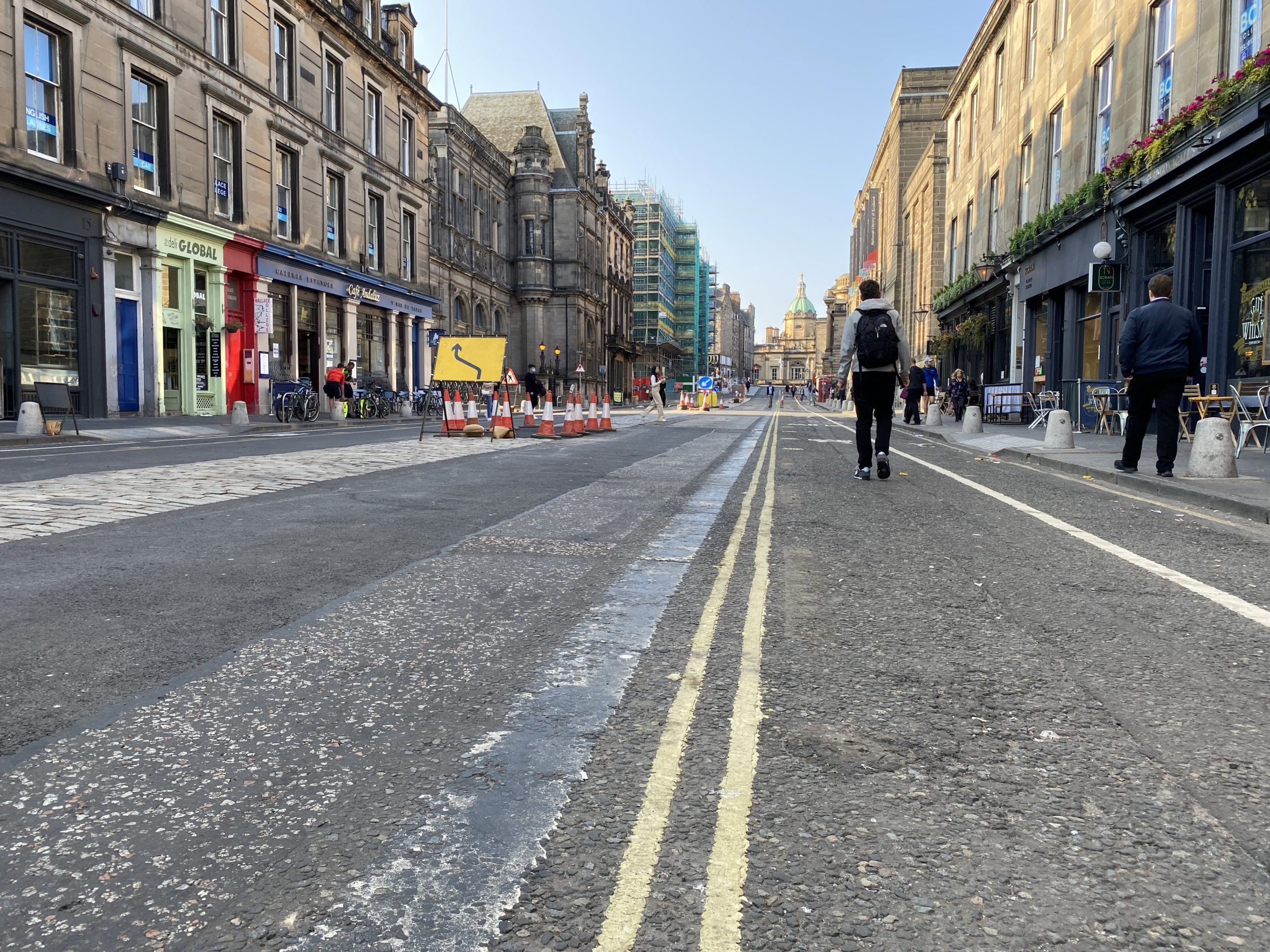 Sustainable transport campaigners say that this week’s work – removing the cycle lanes and other infrastructure introduced under the Spaces for People programme on George IV Bridge – is a sign of the legal loopholes involved in transport matters.

The cycle lanes will be reintroduced at a later date under a different, and previously approved, scheme but complex transport procedures mean the bollards have to first of all be removed.

The campaigners say that this infrastructure “Hokey Cokey” must be stopped and have written to Transport Minister, Graham Dey, and Michael Matheson, Minister for Net Zero, Energy and Transport, and other local politicians seeking urgent action.

At George IV Bridge the segregated cycle lanes may not have been the prettiest in the city, but they helped cyclists to stay safe during the pandemic and in recent months when traffic increased again. The council already has a transport scheme in place with enhanced pedestrian spaces and protected cycle lanes, but as a result of the legal loopholes, it is not possible to leave or amend what is already on the ground. Instead the Spaces for People measures must be removed and will then be replaced by the approved scheme in due course, wasting the public money which was spent on the Spaces for People scheme.

In answer to a recent question by Cllr Jason Rust on the amount of funding from Spaces for People spent on Forrest Road and George IV Bridge, the council confirmed that these measures had cost £33,863.78 and £118,389.63 respectively. The amount spent on The Mound is the highest relating to any one scheme and amounts to £148,088.37

The campaigners say that the tortuous Traffic Regulation Order (TRO) processes are “unfit to support the rapid decarbonisation of the transport system”. They claim the way the measures are introduced pays too much attention to the views of objectors, and do not support government policies such as the achievement of net zero carbon by 2030.

The cycle lanes are being ripped out this week as you can see from the photos below. The fencing is in place after the fire last month which gutted the shops at Elephant House and Patisserie Valerie, and which has possibly meant the segregated lanes have been removed more quickly than they might have been.

BEST: Better Edinburgh for Sustainable Travel is a campaigning group made up of other community groups and businesses from all over Edinburgh who would like Edinburgh to become a city where everyone can travel easily by sustainable means, whoever they are and wherever they need to go.

The group has written to Scottish Ministers and other local politicians demanding urgent action and attention to the legislative structure under which road improvements are introduced. The letter is shown below.

We asked Transport Convener Cllr Lesley Macinnes, Transport and Environment Convener, about the removal of the cycle lanes and walking spaces.

She said: “We’re in the process of restoring the original road layout on George IV Bridge, as approved by Transport and Environment Committee in August. I recognise the frustration felt by those who want to see improved, safer infrastructure retained for the benefit of all those choosing sustainable ways of getting about.

“Long term we are working towards ambitious, permanent plans for the street as part of the Meadows to George Street project. This will transform walking and cycling facilities along the route, significantly improving public spaces and accessibility for everyone and bringing back some of the benefits felt by people who have enjoyed using the temporary  cycle segregation, for example. Retention of the temporary measures could, unfortunately, impact on the processes required to deliver the wider permanent scheme.”