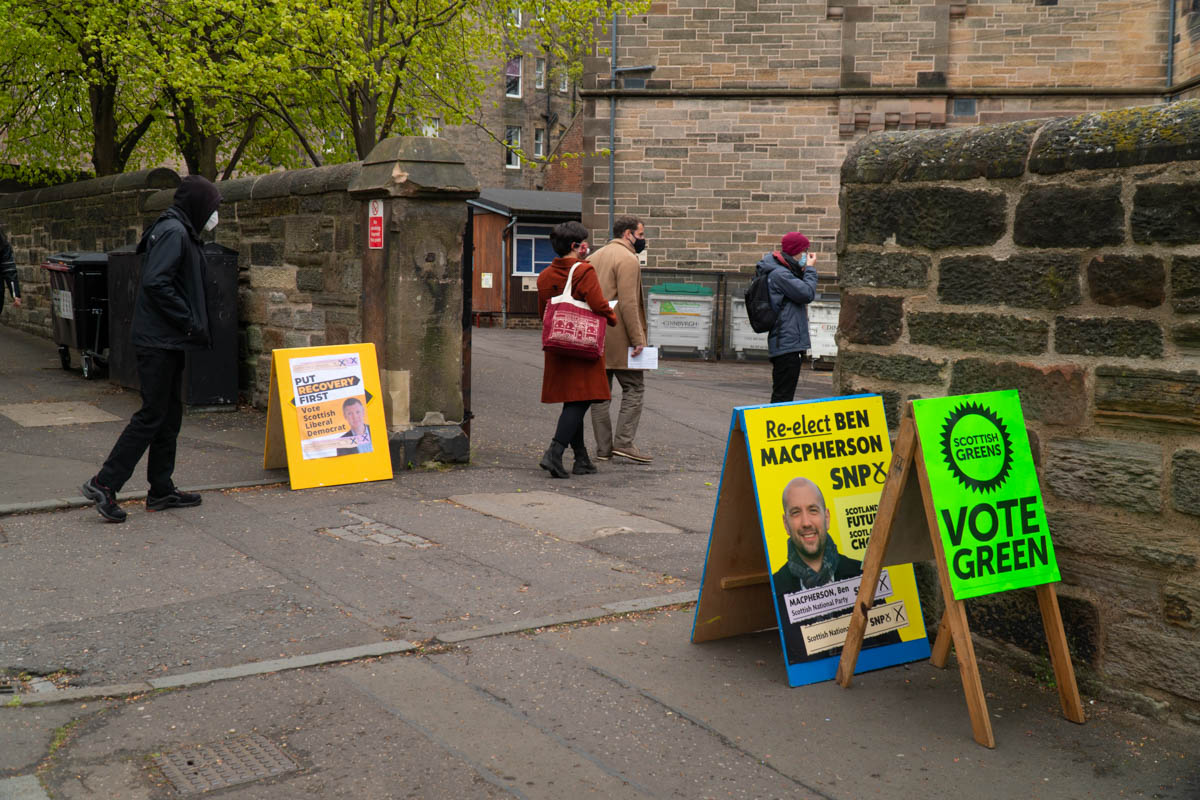 Warning – this is a letter in suspense.  It must hang in the air while the counting goes on after Thursday’s elections for The Scottish Parliament.

But this aerial viewpoint gives us a chance to consider this extraordinary democratic ritual as it unfolded during the Covid-19 pandemic.

Election day itself was bitterly cold, with a strong north wind and sleet and snow across much of the country. Although a quarter of the four million people registered to vote did so by post, most of us braved the weather to do our democratic duty.

When I went to vote at my local church hall, I was met by an election official in a mask with a clip-board and a loud voice.  He kept a steady queue of voters in line, all wearing masks. Inside the hall, the staff were sitting behind perspex screens. They checked my name and address and handed me two ballot papers, one for the constituency and one for region.  In this election 73 MSPs are elected from individual constituencies under an old-fashioned first-past-the post system and 56 are elected from eight regions under a complicated proportional system which only the Belgian mathematician who invented it Victor d’Hondt was able to understand and that was back in 1882. (read our guide to it here)

The opinion polls are not much clearer on the details. But what they are predicting is that the SNP will romp home as the largest party by far and Nicola Sturgeon will remain First Minister. Whether she wins an outright majority of 65 seats is up in the air, like this letter. It depends on how the votes fall in nine marginal constituencies, all very different. But actually, whether the SNP gain a majority is neither here nor there, because the Green Party normally supports the SNP and is expected to increase the number of its MSPs from six to possibly nine or ten.

Which party comes second is also up in the air, and thereby hangs a tale. Because they are both led by new boys. The Conservatives are led by Douglas Ross, a young farmer from Morayshire and in his spare time a professional football referee. He’s had a reasonably good campaign, surprisingly soft spoken, and, not so surprisingly, trying desperately to distance himself from the prime minister and the recent smell of scandal coming from Downing Street.   Boris Johnson has not dared show his tousled hair in Scotland during the whole campaign.

The Labour Party is led by a stylish, self-assured young dentist Anas Sarwar, son of Britain’s first Asian MP and currently Governor of the Punjab.  He’s generally thought to have had a good campaign. He’s not had to distance himself from his UK leader Sir Kier Starmer – who has been campaigning in Scotland. And he’s been trying to take the Labour party back into the centre ground of Scottish politics after a decade in the wilderness.

The Greens owe their success to increasing worries over climate change. They’ve also benefited from their fairly recent policy of Scottish independence. Like the SNP they have tapped into the outrage felt in Scotland over Brexit and the austerity, and pure incompetence, of recent Tory governments in London.  They’ve also been strongly led by Patrick Harvie, in a Kier Hardie tweed suit and the party’s joint-leader Lorna Slater, a feisty Canadian and professional engineer who has being giving interviews while hanging upside down on her trapeze.

The Liberal Democrat leader Willie Rennie is a veteran campaigner and knew exactly how to set up dramatic photo-shoots….. in a giant deckchair at the Forth Bridge, on a farm, flying in a micro-light, running along a beach.  Nicola Sturgeon herself was more sedate, turning up in cafes and children’s play-groups, all over the country, one day in Dumfries, the next in Aberdeen. Brightly painted campaign buses toured the high streets.

But it wasn’t easy to encounter “ordinary voters” under the stilted circumstances of Covid, so the battle has been fought in the TV and radio studios rather on the doorsteps or in the streets.  The Scotsman concluded that the campaign was “a model of civility”. The worst it got was a little too much “over-speaking” during the TV debates.  What happened in the dark reaches of social media has not come to light, thank goodness, and it’s best ignored anyway.

Old men have sometimes haunted the campaign. But what they added in wisdom and old-fashioned charm probably reinforced existing opinions rather than leading to any significant interventions. I’m speaking here of Alex Salmond, the former SNP first minister, who founded his own Alba Party, George Galloway who ran up the Union Flag and the former prime minister Gordon Brown who turned out for Anas Sarwar when he wasn’t urging the G7 to do something about world poverty.

Does it all matter?  You bet it does.  Scotland, like everywhere else, needs to climb out of the pandemic clinically and economically. In that, all the parties are agreed.  But how it’s done is crucial.  And there’s no getting away from it, this election was also about independence.  If the SNP and the Greens move for a referendum in the next five years, it’s hard to see how it can be denied.