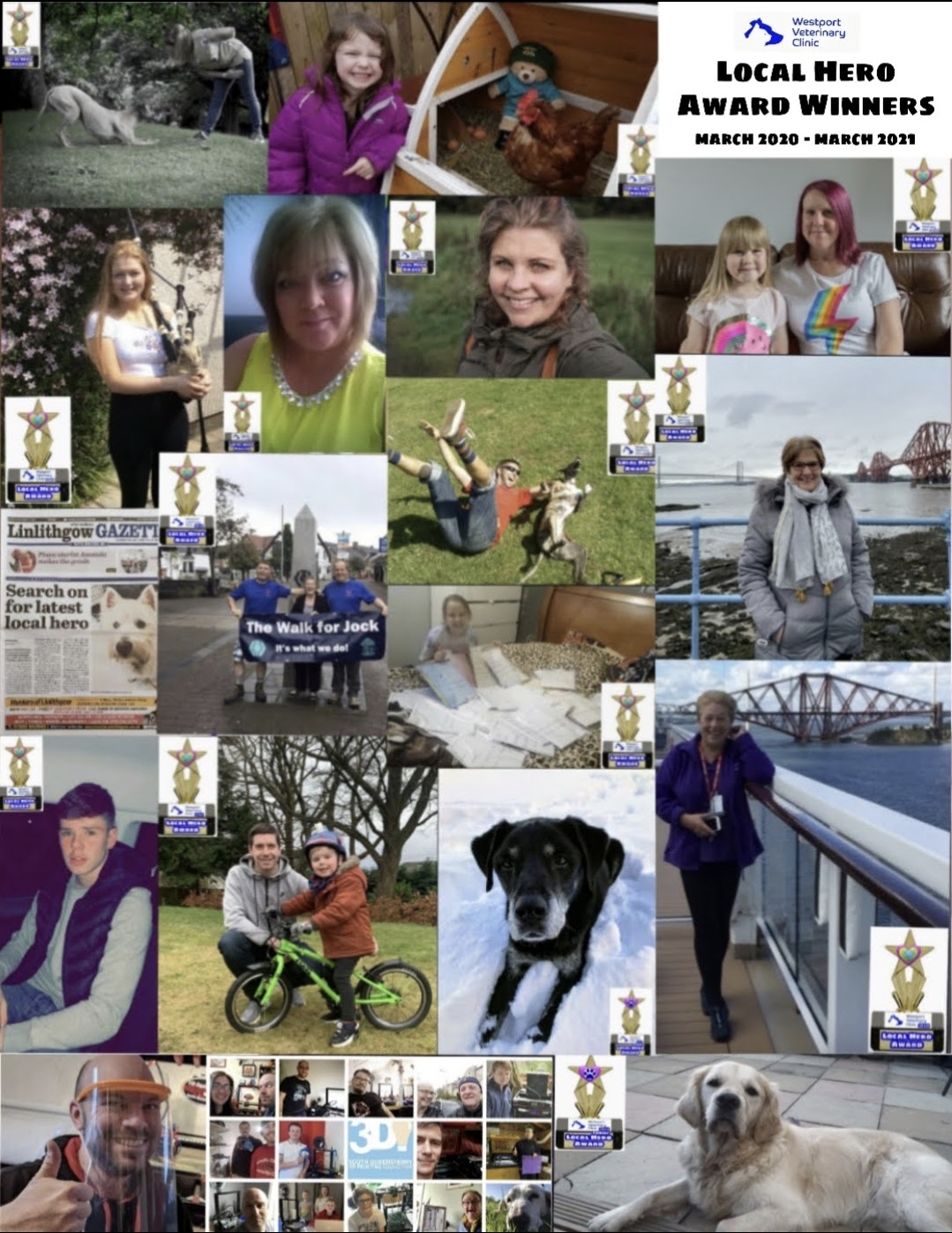 Westport Veterinary Clinic in Linlithgow have just published their list of Local Heroes along with a video which you can watch below.

They asked for nominations over the last year, firstly asking local children to design a poster about kindness which were emailed in. Lily Green (5) had drawn lots of posters but could not enter them in the competition as she had donated them to Linlithgow Care. She wanted to do something to cheer up the care home residents in case they were missing their grandchildren. So Lily became the first hero and now they are all honoured in this video:

Lily Green – Linlithgow (*0:30) five-year-old Lily donated lots of posters and pictures she had made, along with her brother Mark, to cheer up residents at Linlithgow Care Home. Lily wanted to send some cheer in case residents were missing their Grandkids. They also spent lots of time colourfully decorating their driveways with messages of thanks for the NHS.Lily also won a Scotland High Street Hero Award for her acts of kindness.

Christie McNab – Linlithgow (*0:54)16-year-old Linlithgow Academy pupil Christie played two tunes on her bagpipes everyday of lockdown. Each day at 1pm she played the pipes outside her home to lift the spirits of the local community. Her Dad, Fergus McNab, posted these videos daily and these were greatly enjoyed both by the local community, as well as by others around the world.

Eli Jacks – South Queensferry (*1:24)Eli made facesheild and masks using 3D printers and donated these to those in need. When there was a national shortage of PPE he dedicated his time to making Sheila’s donating them to the the NHS, essential workers, key workers, and businesses who continued to work through the pandemic, prioritising the safety of his local community. He also raised over £8000 for different charities in the process.

Teresa Summerfield – South Queensferry (*1:49)Tessera and her 7 year old daughter Ruby dedicated their time over lockdown spreading ‘rainbow joy’ in their local community. Teresa took socially distanced photographs of local residents and families on their doorsteps over lockdown. This allowed families to have a positive memorie of their time staying safe at home as well as capturing photographs to preserve in history of a time people worked together to keep everyone safe. He daughter Ruby was a key component to the task making the residents smile and giggle for the photos. All her skills, time and photographs were donated to over 230 families.

Rory Millar – Linlithgow (*2:24)Rory spent lockdown working as a volunteer, doing paper rounds for Alexander’s Convenience Store in Linlithgow. After the each day he delivered essential items to local residents who were shielding. Many of whom would not have coped without these. He was the only human contact for many and so many locals said how much Rory had helped them to cope both with delivering essentials and always with a friendly smile.Alexander’s Convenience Store and its staff also won a Scotland High Street Hero Award for their acts of kindness to the community.

Iain Withers – Linlithgow (*2:54)Iain, from Narrowboat Farm, set-up the ‘Linlithgow Farmily’ Facebook group. A community network which contained advice, for gardening and growing your own vegetables and tutorials and videos on being self sufficient and how to create a beautiful garden. He organised free started packs for gardening, growing own vegetable gardens and arranged for over 100 local school children to revieve Sunflower seeds – all of these free to locals.A group which has promoted wellbeing, provided wonderful educational tools and given many a sense of purpose whilst staying home .It has also been an incredible support for locals with constant communication, included light hearted humour and an increase of beautiful gardens in the local community.

Jaimie Taylor (*3:34)Jaimie, a Primary 6 pupil at Kinneil Primary School in Bo’ness, worked tirelessly over lockdown leaving a ‘trail of kindness’ in her local community. She started ‘Find, Read, Rehide’ where bags were left for local children in the area. These contained a book to read a  joke and a treat. She encouraged others to the pay it forward with replacing these when they were finished. She also made clay animals and hid them around Kinneil Woods for children to find and keep, as well as creating other Safari animal trails and she started the painted stone trail at Kinneil School.

Rebecca Holmes – Linlithgow (*4:06)Rebecca created and ran the ‘Linlithgow Front Steps Project’. Taking photographs capturing local families outside their homes over lockdown. Capturing memories for families to keep, with some quickly family photos making others smile too. She dedicated all her time and skills to the project as well as donated all takings, over £5000 to local charities.

The Search for Hamish’s Hero – Linlithgow (*4:30)This local heroes identity was initially unknown, so we took to the local community to help us find the individual who saved the life of Hamish the West Highland Terrier. Hamish was walking round Linlithgow Loch with his owners one day when he got stuck in the Loch by his harness being caught to a fallen tree in the water. His distressed owners were unable to reach him out in the water and concern was growing for his welfare. One local who saw the distressed couple, without a second thought for her own safety, went into the Loch and was able to free him from the tree and remove him from the water. After help from the local community we were able to find and honour Hamish’s Hero, local resident Lesley Kerr.

Jules Meek – Linlithgow (*5:10)Jules dedicated her time and skills both over lockdown and throughout the year handmaking re-usable fabric facemasks. With the national shortage of PPE she was able to provide essential workers with masks to keep them safe. Making and donating over 3450 facemasks to workers and those in need. St John’s Oncology  Western General Oncology, Maternity units, Doctors Surgeries, Woman’s Refuge to name a few as well as providing masks for local  businesses and residents.Jules also won a Scotland High Street Hero Award for her acts of kindness to the community.

Claire Staines – Linlithgow (*5:46)Claire was nominated for her acts of kindness to a local family to help their dog, Sally the Beagle, cope through recovery from Orthopaedic surgery. She offered them advice and donated items to help to keep her entertained and cope with the long rest required in sucessful recovery process from surgery. Claire has also been a beacon of strength and support for many others who have struggled through the pandemic. As well as supporting her team at Lothlorien Dog Services, she has also helped other business owners and owners throughout the year. She has also arranged for donation of her time and training services from the Lothlorien team for two dog charity organisations throughout 2021.

Caroline Gallacher – South Queensferry (*6:25)Caroline dedicated her time during the pandemic to looking after and maintaining the phonebox installing Road for local residents. The phonebox contained it re Ms locals could take to help them over lockdown, such as food, books, toys and other items. She then organised donations of essential items and toys from the local community to help families who were struggling. Working with her friend, Dianne Forrest who collected and organised food hampers, they were able to provide struggling families with essentials as well as providing them with food hampers, gifts and toys for Christmas.

Gregor Angus – Linlithgow (*7:04) Gregor saved the life of local man Brian Watson. Whilst out with his son, as they walked along Linlithgow Canal, they had passed Brian walking his dog. When they later walked back, Gregor noticed Hugo sitting by the canal path but the dog appeared to be on his own. Gregor thought this was a little off and went in search of Brian. He discovered he had fallen in the freezing canal, and found him facedown in the water. Calling for help he pulled him from the freezing water. Gregor’s son, five-year-old Lucas was was him at the time and bravely looked after Hugo the dog whilst his Dad Gregor rescued Brian.

Hugo the Labrador – Linlithgow (*7:40)Hugo received the first Linlithgow Canine Hero Award for part in saving his owner Brian Watson. Hugo was every bit the loyal canine and when Brian had fallen into the canal he never left his side. This loyalty and devotion to his owner resulted in his rescue, saving his owners life.

Anne Mitchell – South Queensferry (*8:05) Anne led ‘ The Ferry Elves’ in South Queensferry. A group created and dedicated to provide support to individuals struggling throughout the pandemic. Anne’s work and dedication resulted in helping and supporting 51 young people who were in need. She organised clothing, food packages, fuel tickets and other essential items. She also organised food and toys for families who were struggling, providing families with meals over Christmas and children presents to open. Organising and providing items to others in need, dedicating her time working with the local community and local businesses.

Andrew the Golden Retriever – South Queensferry (*8:39)Andrew received the first Local Canine Hero Award for South Queensferry for helping to save the life of another dog.When Westport Vets in South Queensferry had an emergency case – Murphy the dog was extremely poorly and required a blood transfusion before emergency suregery could safely be performed. Andrews owners raced him to the practice to help by being a blood donor. Without Andrew the emergency surgery required would not have been safe to perform.Andrew is also a Therapy dog, he spends time visiting g local care homes, offering support for those in need. He is also a fundraiser to raise money for Guide Dogs.

Davie ‘Deep Sea’ Paterson – Linlithgow (*9:15) Davie known locally as ‘Deep Sea’,  has dedicated his time during the pandemic to keeping the local community entertained as everyone stayed safe at home. Since the first lockdown in March 2020 he has run to online quizes each week, all in aid of ‘ Walk for Jock’, a charity he created in memory of his brother. Not only do many locals enjoy the quizes each week, these are also enjoyed around the world with weekly participants in Sweden, Australia, Toronto (to name but a few!) He raises money for a multitude if different charities and offers support to others fundraising. Throughout a multitude of charity events, through Walk for Jock, he has raised over £140,000 for charities.
Westport Veterinary Clinic is continuing with Local Hero Awards and welcomes nominations from locals to nominate someone for an act of kindness.

This past year local communities have risen to many challenges. In the toughest of times, communities have worked tirelessly to show their support and kindness for one another, each and every one is truly inspiring.

If you would like to nominate someone for Westport Vet’s Local Hero Awards, please email them with details and their act of kindness to: heroes@westportvets.com

Each month Westport Vets Local Hero will receive a certificate of recognition and a treat for themselves at a local business.