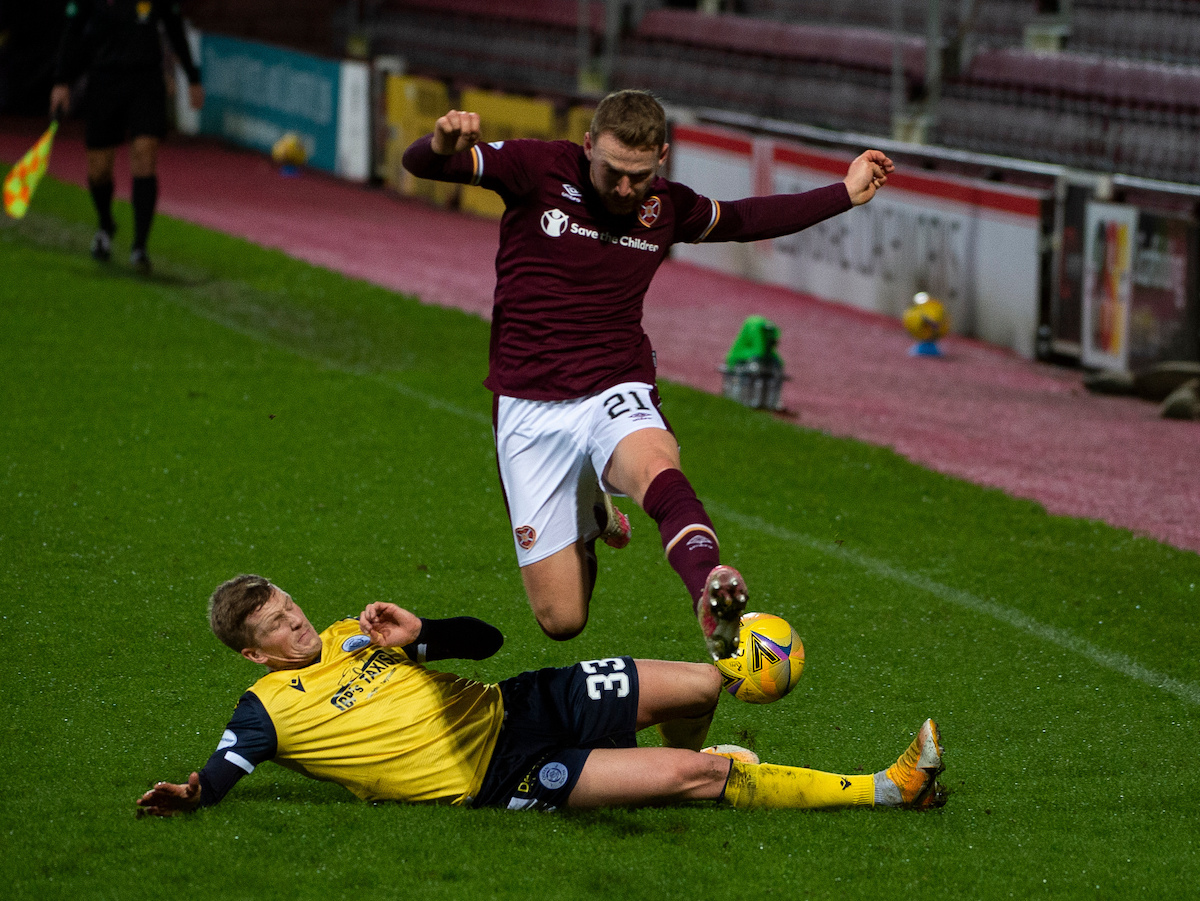 A dire first half performance saw Hearts suffer defeat at the hands of Dundee under the lights at Dens Park.

The Jambos just didn’t look at the races from the off with the home side, clearly looking for revenge after their 6-2 drubbing at Tynecastle on the opening day of the season, getting in their faces with a higher intensity and pace.

Robbie Neilson made three changes to the side that defeated Arbroath on Boxing Day. Out went Liam Boyce, Andy Irving and Michael Smith with Jamie Walker, Stephen Kingsley and Jamie Brandon coming in.

The tone of the game was set in the first minute when Dundee’s Shaun Byrne was lucky to see only a yellow card flashed at him by referee Don Robertson when he clattered late into Steven Naismith.

Dundee’s evident hunger and energy gave Hearts no time on the ball forcing them to concede possession and fail to string passes together. The opening goal came after only 14 minutes with ex-Jambos Jordan McGhee nodding home a Charlie Adam cross.

The Dees doubled their advantage on 36 minutes when Danny Mullen headed firmly past Craig Gordon after the excellent Adam again found a Dundee head with a cracking ball from the flank.

The question was how Hearts would respond at half time. Neilson opted to bring on Andy Irving for the struggling Peter Haring at the break and the young midfielder had an speedy impact when his 55th minutes curled free-kick from the touchline was missed by all and ended up in the back of Jack Hamilton’s net.

The JTs clearly had their tails-up but couldn’t find the leveller – despite both Naismith and Stephen Kingsley having superb opportunities to score in the 71st and 76th minute respectively.

In contrast it was James McPake’s men that stretched their lead when Christophe Berra was adjudged to have tugged on Cammy Kerr’s jersey with eight minutes to go with on-loan Celtic youngster Jonathan Afolabi slotting home from 12 yards.

Having raced to a five point lead at the top of the Championship with a game in hand, this result marks a second league defeat – the other coming again away from home and again against a league title challenger in Dunfermline.

Speaking after the game, Robbie Neilson said to BBC Scotland: “On the balance of chances created we should have at least had a point, if not won the game.”

“The game has turned again on a very poor refereeing decision. That’s us lost two games this season and two games refereed by Don Robertson.

“Big call for me in the first minute – I thought a red card but didn’t give it. And then the penalty – I can’t see it as a penalty.

“When you play at Hearts, you want to win every game, but it’s not going to happen like that. Winning leagues is about how you recover from a knock and we have to do that again.”

The Jambos go again in the league against Dunfermline a week on Tuesday at Tynecastle when they’ll be challenged to show a performance for 90 minutes and put a stop to leaking goals.