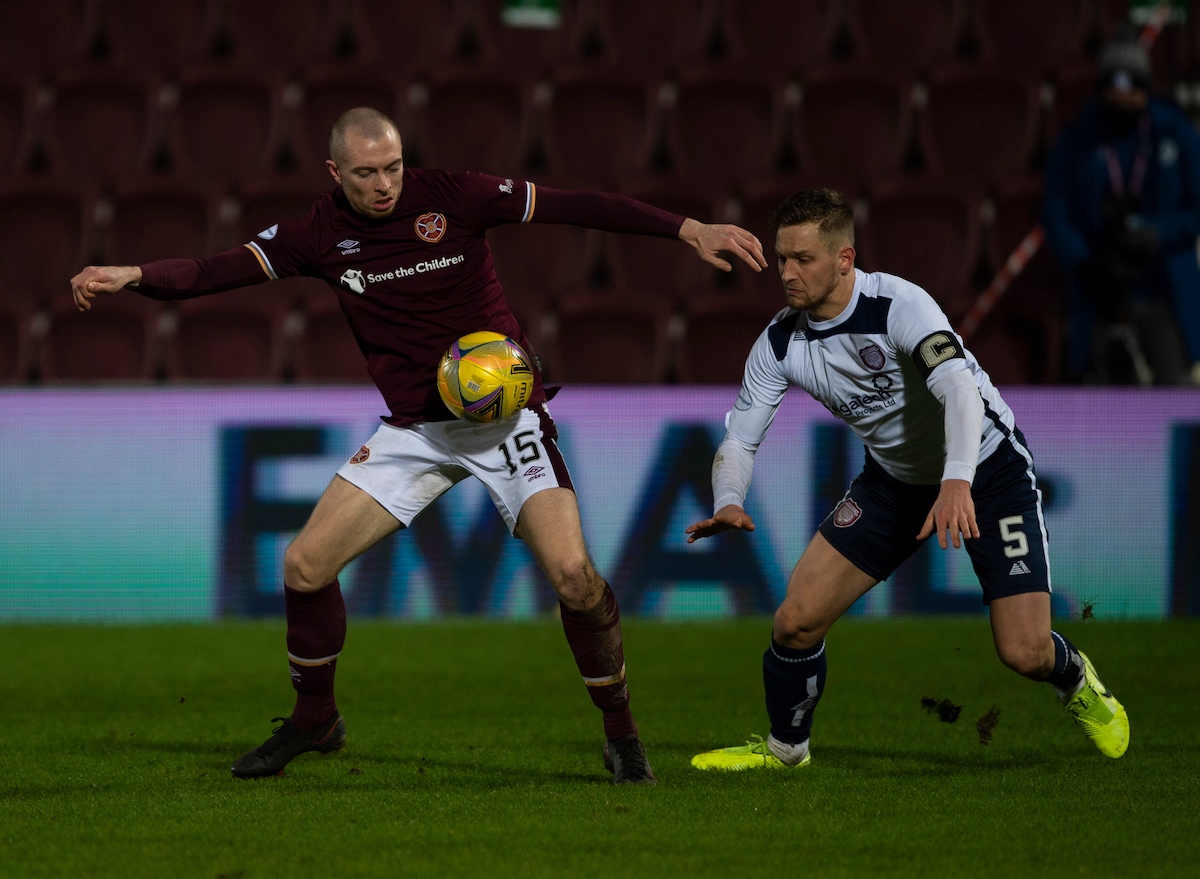 A six minute first half hat-trick from captain Steven Naismith was enough to allow Hearts to go five points clear, with a game in hand, at the top of the Scottish Championship with a 3-1 win over Arbroath at a freezing Tynecastle Park.

With John Robertson’s Inverness holding second placed Dunfermline to a 1-1 draw in the Highlands, the Jambos took full advantage ahead of their visit to Dens Park on Saturday evening to face a resurgent Dundee who have bagged six goals and six points in their last two league outings.

Hearts boss Robbie Neilson made three changes to the side that defeated Ayr United on Boxing Day with Steven Naismith and Craig Wighton coming in for the misfiring Elliot Frear and Jordan Roberts and Peter Haring taking his place in the side for the injured Stephen Kingsley as Andy Halliday shuffled to cover at left back.

Hearts had taken all three points from the sides’ previous clash on the second matchday of the season when a Craig Wighton strike was enough to see the Jambos win at Gayfield. This was a more straight forward affair, certainly in the first half, with Hearts looking threatening with a number of balls in behind a rather high Red Lichties back line.

The home side suffered a setback after just 20 minutes, however, when main striker, Liam Boyce, was forced off after failing to recover from an earlier challenge. He was replaced by the enigmatic Jamie Walker. Despite his erratic form, Walker turned provider for the opening goal of the game when he crossed a cracking Haring pass for Naismith to tap home on 29 minutes.

Just two minutes later, the Scotland international grabbed his brace when he nodded home a deflected Michael Smith shot after Walker inexplicably scuffed an effort that should have been in the back of the net.

Naismith had his third goal and hat-trick wrapped up on 36 minutes when he pinged in the resultant penalty after Chris Hamilton handled an Andy Irving strike inside the box.

The Jambos’ faithful were rubbing their hands going in to the second half expecting a further glut of goals. However, the second 45 minutes had far less intensity with the home side failing to create much beyond half chances and overhit passes. Arbroath gave the league leaders something to think about early in the half too when Irving failed to heed the calls of his defensive team mates and clumsily intercepted an Arbroath attacking pass which allowed Kris Doolan to net coolly past Craig Gordon.

Despite a drab second half, Hearts sit neatly at the top of the pile going in to 2021. However, the cheapness in which they’ve gifted goals this season, especially in the last two games, as well as the relative impotence of periods of their play will raise questions going in to Saturday’s evening kick off against a side widely seen as their main sustained challengers this season.