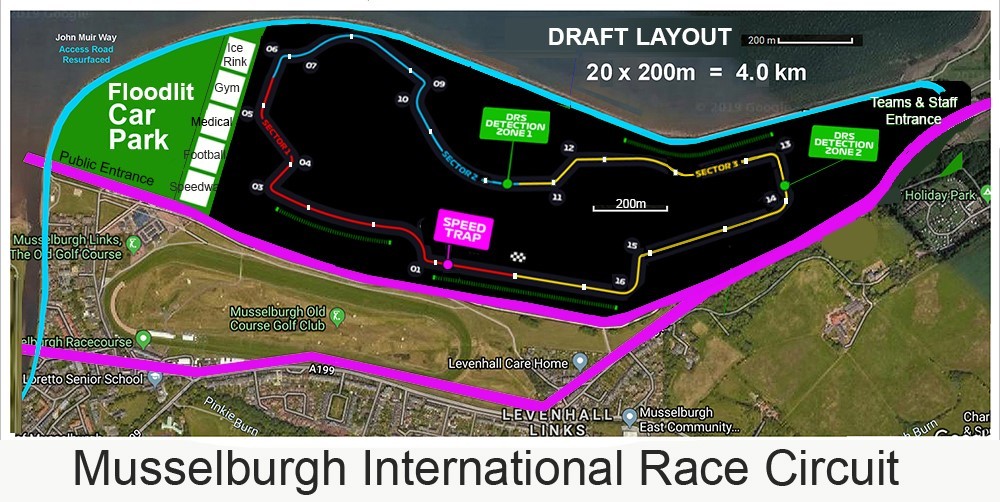 A Formula 1 race track at a site earmarked for a wildlife haven would bring more benefits to the local economy, council chiefs are being told.

A proposal for an international race track at Musselburgh Lagoons is being put forward by The Sunbeam Trust, set up by retired Peebles businessman, Bob Jamieson.

He says the trust is currently involved in a project to start producing hydrogen fuel in Scotland through one of its subsidiaries, Alba H2 Fuel, and it is hoped the track could eventually feature hydrogen cars which would create zero emissions and ‘silent racing’.

The proposal would see other sports facilities based at the site, including an ice rink, gym and speedway venue; however, the main focus would be a race track.

Draft layouts of the proposal, which has been sent to East Lothian Council by the trust, outlines a track based on the Albert Park circuit in Melbourne, Australia.

Mr Jamieson said that the track proposals were first put before East Lothian Council with his plans two years ago but, at the time, he was told no plans could be brought forward until the lagoons had been restored.

The ash lagoons were created during the years of operation of Cockenzie Power Station.

Waste ash from the energy plant was transported via pipes to the lagoons, which are located on the seaward side of Musselburgh Racecourse.

A large part of the 120-hectare ash lagoons has already been reclaimed, grassed and transferred to East Lothian Council ownership, providing a habitat for wildlife, with the last two lagoons also earmarked for the haven.

However, Mr Jamieson says the wildlife proposals are a “wasted opportunity” and is urging council bosses to look again at the trust’s race track proposal.

He said: “It is scandalous that this valuable site will not generate any local income from birdwatchers, butterflies and seagulls.

“The opportunity to generate income from millions of visitors to support local businesses and the local economy will be lost.

“Two years ago, a proposal to bring a world-class Formula 1 race circuit was presented to the council.

“I have been in touch again with [Councillor] Willie Innes [council leader] and await his response.”