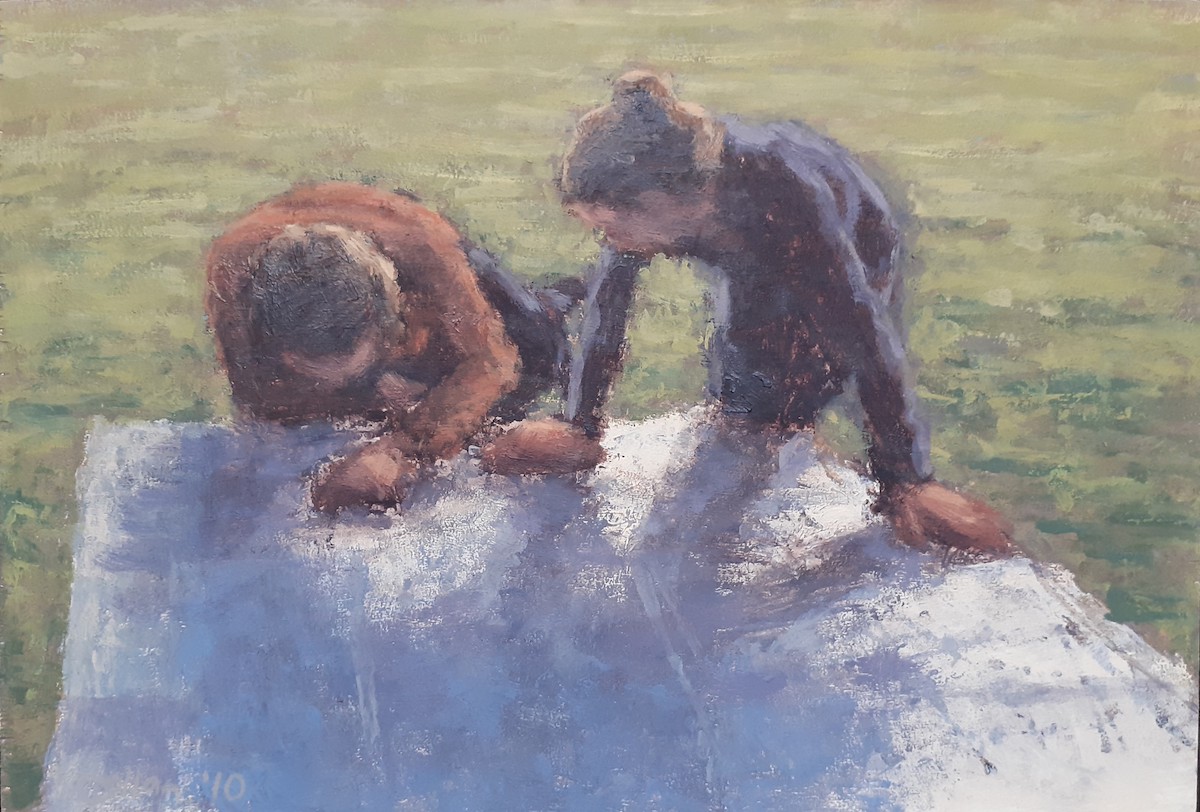 A graduate of Edinburgh Art College Damian Callan is staging a retrospective exhibition at Dundas Street Gallery from 11-17 December 2020 with some new works as well as old ones borrowed back from collectors.

Callan only became an artist later in life, starting off by painting figures at Leith Waterworld. He said: “Having to paint figures that were moving and water that was moving was a real breakthrough for me. Even when I went back to portraits I was trying to paint in a different way – I was trying to paint movement. For a while after I graduated I was painting athletes and swimmers. I got commissioned by sportscotland to produce art for their Head Office and I did a series of athletes including curling and judo.

“Then when we had a family I realised I had little people moving all around me all the time so that became my theme. We used to go to Skipness for holidays and in the summer we visited the Hebrides, to Harris and Berneray along with my sister-in-law’s family. So there’s often a big group of youngsters by the sea and they’ve become my subjects.”

There will be around 30 works in the exhibition and while Callan has not quite decided yet, it is likely that these will be arranged in chronological order. He is particularly looking forward to seeing the painting of his wife Ruth who was pregnant with their first child at the time. ‘Waiting for Isaac’ was painted 23 years ago, when the baby was over two weeks late in being born. Isaac now works in Toronto on an online newspaper, and has written for us in the past too.

Damian and Ruth’s other children are Iris (21) who is studying Arabic at Edinburgh University, Inez (19) who works at Garvald near West Linton and Ivan the youngest who is in his final year at school. The others in the paintings are the cousins and friends and the paintings feature the children on the beach, in boats, and playing games. But there was also a holiday in Paris when Damian gathered a lot of material for paintings.

He takes photographs on which he later bases his paintings. This year he thinks he had a ‘pretty good lockdown’, moving his studio into the front room and meanwhile doing some teaching art classes online. He instructs on painting and drawing of figures, usually in a studio set up, but was pleased that people at home had an amazing resource to draw from.

Callan said: “I produced some drawings of the rooms in our house. We got this amazing light in spring and I drew Ruth getting dressed and the light pools on the floor. This came out of necessity, figures in rooms, but it was something new that I really hadn’t done before.”

Callan studied art after working with the charity Garvald for a few years. With his social work experience he planned to study at Leith School of Art for a year and then go to study art therapy in St Albans. But just as he was about to go to Leith, the founders were killed in a car crash on the A68. Luckily he had a back up offer from Edinburgh College of Art and took that up.

He admits: “In hindsight, it was wonderfully fortunate because I did four years training as a painter rather than just one year to train as an art therapist.”

Callan was fortunate early in his career to be patronised by a Swedish benefactor who employed him to produce a series of paintings for his homes and offices. This was a fortunate result of his work being put on the internet when the internet was still relatively new. We did ask if any of those paintings would be in the exhibition, but they are a bit too big to be sent to Scotland and are not paintings of the family which is the theme for the December exhibition.

Callan at 60 is at Dundas Street Gallery from 11 to 17 December 2020. There may even be a projection outside, so watch out for that.

Private View Friday 11th December 2pm – 9 pm Tickets for 30 minute viewings available at:https://www.eventbrite.com/e/callan-at-60-retrospective-art-exhibition-tickets-131253170767
(gallery numbers restricted to 6 visitors at a time – if you have to wait we will have hot drinks and a slide projection for your comfort and amusement).Saturday 12th   10- 6pm Private View Continues! (tickets on eventbrite:) https://www.eventbrite.com/e/callan-at-60-retrospective-art-exhibition-tickets-131253170767  Sunday 13th – Thursday 17th gallery open 11 – 6pm
(Feel free to ring ahead if you would like an idea of how busy the gallery is: 07951 878 560)

Wednesday 16th 10 am Painting Demonstration (Online – see website)
Please note the entire exhibition will be viewable online from Thursday 10th December atwww.damiancallan.com – a catalogue of the exhibition is also available. 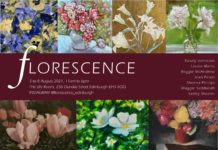 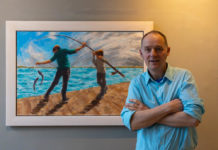