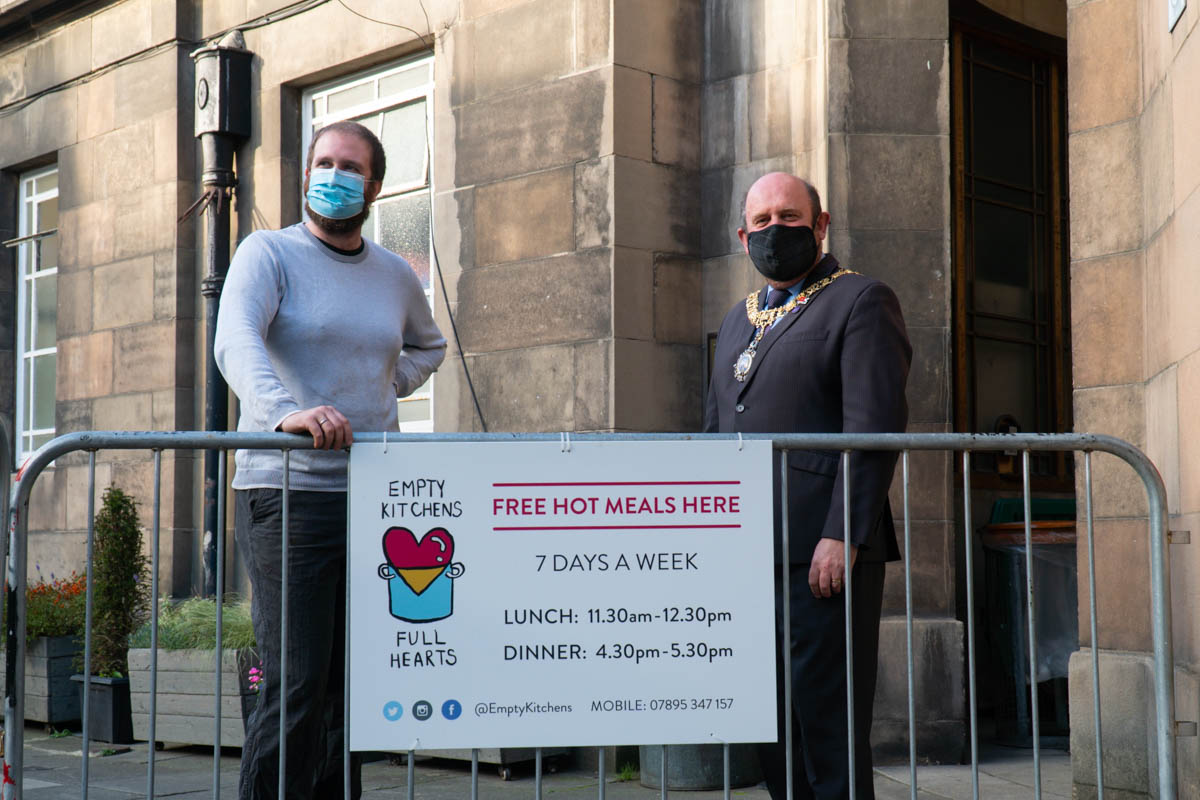 The movement which responds to the Covid-19 pandemic involves professional chefs cooking meals for those who need them most needs a new home. The chefs are either out of work, or underemployed, so this work is keeping them busy and their skills honed at the same time.

At present Empty Kitchens Full Hearts (EKFH) is working from Leith Theatre where they have just completed delivery of 250,000 meals during this last week. The Community Interest company founded in April is run entirely by hundreds of volunteers, and demand for their service has increased over the months since April.

In the first three months the chefs made 50,000 meals and only one month after that they had prepared 100,000 meals. EKFH say there is no sign of the need decreasing, and in the next six months they expect to provide 500,000 meals.

Food poverty means that people do not have enough money to buy food, but there are also people who have no access to cooking facilities too, so some of the meals provided might be sandwiches rather than something to reheat at home.

Lewis MacLachlan, the Founding Director of Empty Kitchens, Full Hearts, commented on the 250,000 milestone: “With more and more food insecure citizens coming to us every day, and therefore our costs rising, we’re obviously concerned about the future. If services like us stop, we don’t know where people will get their next meal. The situation really is that dire.”

When we met Lewis on Friday morning he told us: “What we now need is the strength to continue to grow. We have identified real need in Edinburgh and a machine that will meet that need to combat destitution. We need to continue to grow our community of volunteers, whether drivers, packers, chefs, kitchen porters, admin support. We also need support to find a permanent home. The issues that we are tackling are not going away any time soon in Edinburgh, but we are committed to making them go away. To do that we need to have the stability and security that would come with permanent premises so we can then develop our model further help more people out of destitution, abolish hunger in Edinburgh and look to move into other areas in other cities to help more people.

“Now we are helping 850 to 950 people per day seven days a week this has increased exponentially from 500 per day just two months ago. The demand is exploding. Luckily so far the community has risen to the occasion and our volunteers have been doing some incredible work. We need support to continue to grow.”

The Rt Hon Lord Provost of the City of Edinburgh, Frank Ross, was most impressed when he visited the organisation to see their work in full flow in the late morning on Friday. He said: “It was Cllr Gavin Barrie who raised this at the council, recognising the great work that they do here. What I didn’t appreciate was the scope and scale of the work that is being done here. I had an idea in my head what I was expecting to see, but that has been blown away. What a fantastic organisation. I have been told they have approximately 500 volunteers who work in this organisation delivering three meals a day to over 800 people.

“With no constraint or means testing they are delivering to those who are in need. The people may be initially reluctant to come here – perhaps a Scottish trait – but then when things change they just move on. People are phenomenally honest. The growth of this organisation in the last six months has been exponential.

“I have spent most of my life in the private sector. I have seen businesses going bust as they can’t cope with growth. What we have seen here is a volunteer organisation with Lewis MacLachlan at the centre of it, growing exponentially and coping with that on a day to day basis.

“And yet they are dealing with some of the strongest emotions that you have to deal with when you are dealing with people in real need. As a city council we have just completed an exercise called the Poverty Commission. This is an independent analysis of what is wrong in Edinburgh in terms of poverty and what we need to do to fix it. It has just published its final report which highlights a lot of things.

EKFH take surplus food from supermarkets and other food suppliers and turn them into meals or ‘day packs’. The packs are then delivered all over Edinburgh to those who need them, free of charge. If you or anyone you know is experiencing ‘reduced safe access to food’ then you just need to ask for help. They do not judge anyone but start from a ‘standpoint of respect and solidarity, not pity or saviourism’. Nobody who asks for help has to prove their need. And if you can offer help, then volunteer at this page here. Many people from a variety of backgrounds have already done so, and EKFH say that they try to ensure that volunteering is always a benefit to society and the individual.

Chefs in the kitchen prepare meals for delivery on the following day. There are 500 or so volunteers involved in the distribution of the free meals which are delivered all over Edinburgh. Some 800 meals a day are now being handed out and a further 100 or so people attend the pop up distribution point which is set up each day outside Leith Theatre.

There, anyone can go along and help themselves to food supplies which include tinned food and meals. There is also a big pot of soup and most people we saw had a hot drink or soup when they left.

You can support EKFH on Crowdfunder here. 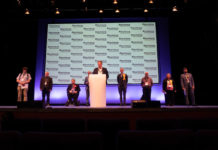