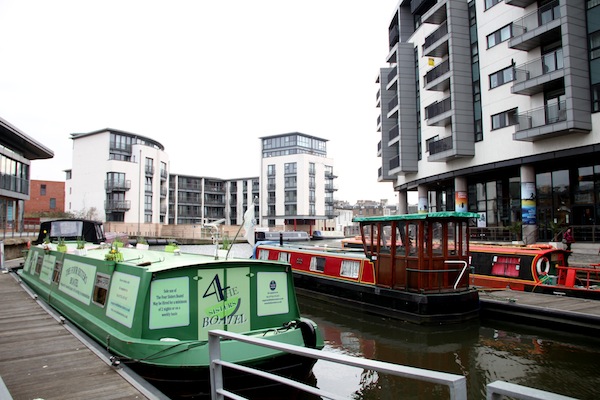 Colin Smith has landed over 100 roach, perch and pike from the Union Canal this year and is actively encouraging more anglers to join him.

He recently-created a private Facebook page which is steadily growing in popularity with now over 300 members registered. Mark Reid helps Colin with the page.

A number of Lothians-based coarse fishermen prefer to travel across country to favoured parts of the Forth and Clyde Canal, or to fisheries like Orchill near Auchterarder or Magiscroft at Cumbernauld, or even Eliburn at Livingston.

Colin knows there are quality fish in the Union (pictured at Lochrin Basin in Edinburgh) which, he says, has been fishing well this year.

He admittedly covers a lot of ground trying to locate fish and his normal attack is via lures, catching jack pike and perch.

The ken angler from Uphall said: “This year the fishing has been on fire for us. I managed 17 pike in February alone on lures.”

Small rubber shads fished on three to five gram jig heads seem to work best for Colin and he finds the best tactic is to keep the lures running at mid depth in the shallow water with a slow retrieve.

Little jerks on the rod seem to excite the fish but small mepps should not be overlooked. Colin said: “They work great for pike on bright sunny days.

“For anyone fishing on the Union Canal, it is important to always use a wire trace as you can be easily bitten off by pike.

“Some unhooking tools, like long nose pliers and wire cutters when fishing with lures, are essential as pike can hammer the lure and take it deep in their mouth.”

His advice for those tempted to have a cast is to target areas with weed cover. This offers places for fish to hide but he added: “If I’m being honest, the fish are spread far and wide. Usually, when you find one there are a few not far away.”

Another tip is to keep a tub of worms in your bag for the slow days. He rigs them on a jighead or sets them up on a dropshot rig to fish tight to the bottom.

It helps, he advised, to have a few different baits to try like maggots and he fishes tight to the far bank most of the time. Fish have, however, been tempted under the rod tip.

In the winter, he said, try deadbaiting for pike with a simple float ledger on 20lb mono so there is less chance of breaking off and leaving a baited trace in the water.

Sardines and smelt work well for him in turning bays, deep water and areas where people go to feed ducks. and he said: “For £8 a year to the Scottish Federation for Coarse Angling (SFCA), I think its great value for money.”