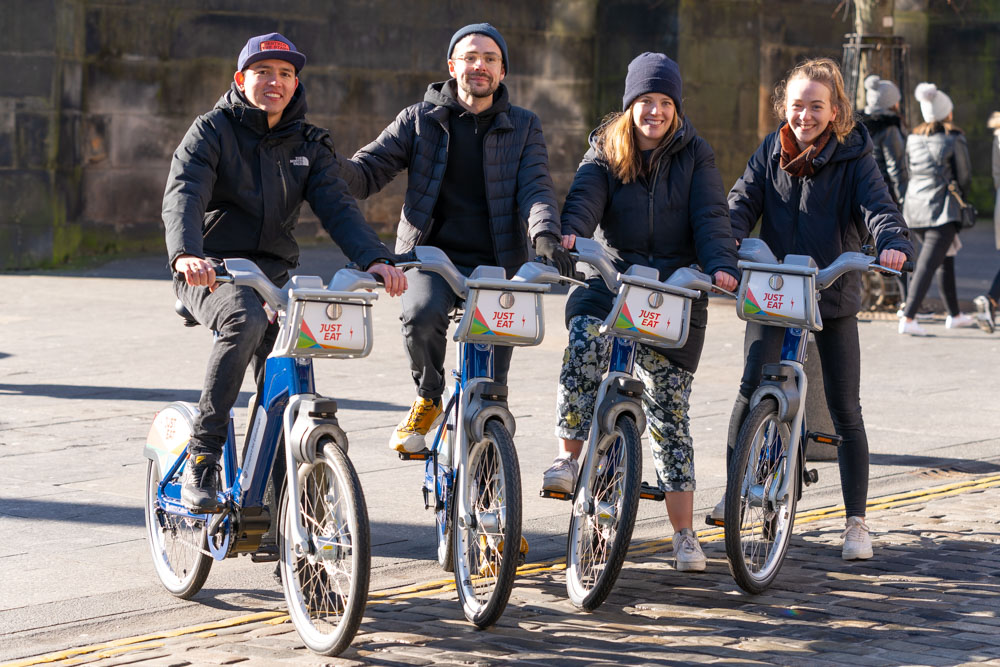 How to spot a stolen bike

Over 221,000 trips were made during the year to September 2020, breaking all the records set last year by other UK cycle schemes and the company’s own statistics.

There has been exponential growth with average trips per day up by 46%.  This is due in part to the 75 new hire stations installed at sites across the city including Montgomery Street and Belford Road next to the Scottish National Gallery of Modern Art (Modern One) and Dean Gallery. Other sites included West Crosscauseway, Corstorphine Road and Craigleith Road.  These are areas previously not served by a cycle scheme and is part of a strategy to create a cycling network for the city as an alternative to short car journeys.

New users to Edinburgh Cycle Hire have totalled more than 34,000 bringing the overall to 57,000 customers cycling in and around the city.

Earlier in 2020 the popular scheme was extended into South Queensferry where there are now several bike hire stations. Start/end journeys rose to nearly 4,500 trips in the first six months, and 1,500 new customers joined the scheme. The company says this proves that cycle hire can function as a public transport service, as well as improving inner city connectivity.

George Lowder, Chief Executive Transport for Edinburgh said: “What makes this performance truly outstanding is that this growth encompasses a period when the country was in lockdown, with homeworking, no Festivals and few visitors in The City.  The people of Edinburgh have embraced cycling and we will continue to strive to grow the scheme to meet with this increasing demand.”

Alex Macdonald, General Manager Serco said: “We’d like to thank our customers to the moon and back for making the positive choice to cycle.  Coincidently the one million kilometres our customers have ridden would take them from the moon, to earth and back again.”

Cllr Lesley Macinnes, Transport Convener, said: “Edinburgh Cycle Hire has proved itself to be an accessible and easy alternative to travelling by car and is a vital part of the city’s sustainable transport network, providing another useful choice of how to get around in Edinburgh.”

How to spot a stolen bike

But the problem of vandalism has had to be addressed too, with many bikes stolen from the bike stations across the city. Do you know how to recognise a stolen bike? If the blue and red lights are both flashing, then it signifies that the bike has been stolen and should be reported to police or the Edinburgh City Hire Scheme.

The scheme has not been without its challenges, theft and vandalism has been an issue with bikes stolen and dumped in public places and damage to hire points.  Further investment has been made to the cycle hire’s infrastructure to deter this type of anti-social behaviour and maintain the scheme’s sustainability.  However, this impacts on delivering services across the City, especially in areas where cycling could become a more accessible mode of transport for many communities.

A partnership has been created with Police Scotland to support efforts to recover stolen bikes and prosecute those who choose to damage the scheme’s infrastructure.

Chief Inspector Neil Wilson, Police Scotland said: “Police Scotland, Edinburgh City Division has been working in close partnership with the Edinburgh Cycle Hire Scheme (ECHS) to address theft of their fleet and vandalism to their infrastructure. We have undertaken crime prevention surveys of hire stations throughout the city and we will support ECHS in the implementation of enhanced security measures. Our officers have been briefed on how to spot a stolen bike and regularly undertake targeted patrolling, which has resulted in numerous apprehensions and prosecutions. We will continue to develop our approach in partnership with ECHS and would encourage the public to remain vigilant and report any suspicious activity involving the cycle hire network to police.”

To bring cycling to the community the scheme was awarded funding from SP Energy Networks’ Green Economy Fund and Funding by Smarter Choices Smarter Places, which is Paths for All’s programme to increase active and sustainable travel throughout Scotland. The programme is grant-funded by Transport Scotland.  The cycle scheme will implement an outreach programme to help people make the choice to walk or cycle for short local journeys, and to encourage groups who were reluctant to cycle feel confident getting on a bike.

In March Edinburgh Cycle Hire took delivery of an additional 68 e-bikes through eBike Grant Fund, delivered by Energy Saving Trust and funded by Transport Scotland.  These have been a popular choice and nearly 21,000 trips have been made using the pedal assist option.  Feedback has shown a broader demographic of uptake for e-bikes, especially amongst older users, proving that you never really forget how to ride a bike.

During the summer Edinburgh Cycle Hire, in partnership with Sustrans and funding from Transport Scotland responded to the Covid-19 pandemic by providing free passes to NHS Workers to support them with their essential work.