The Last Hillwalker is the latest book by climber, writer, poet and actor John D Burns, who brought his hugely successful one man plays to the Fringe in 2010 and 2014.

John moved from Sheffield to Inverness over thirty years ago, and although his mountain climbing days may now be over, he continues to explore the remote bothies of the Highlands, combining this with his writing and performing careers.

I am not always too keen on the writings of outdoor sports enthusiasts. They are sometimes just a bit too serious and keen for someone like me, to whom the avoidance of all risk is a lifestyle choice. My son gave me this book when we decided to expand one another’s reading horizons. He is a former outdoors activities instructor in the Scottish Highlands, whose greatest pleasure is to spend all day kayaking through vertical rapids or ski-ing down 1:2 slopes. I am nothing like him, and I was not entirely sure that I was going to enjoy this form of expansion.

I need not have worried. The Last Hillwalker is not one of ‘those’ books. It is interesting, well written and extremely funny. Most importantly, perhaps, it is human, and full of stories about humanity – it is above all about people. It speaks not only to those for whom climbing is an obsession, but also to us slackers who would rather invest in a bottle of Glenmorangie than an ice axe.

The author grew up in the Liverpool suburbs and had no experience of the hills until he was 17. He and his friends learned their skills simply by getting on with it, one ill-equipped foot in front of the other. We can share in their many near-disasters and occasional euphoric victories because they are like us. We can imagine ourselves in their (inevitably wet) shoes.

On John Burns’ first (school) trip to the Lake District, he toils over a sweltering Kirkstone Pass in July wearing Czechoslovakian boots, climbing breeches and hiking socks. It is 1972, Youth Hostels have more rules than beds, alcohol is banned, and you are only allowed in if you’ve arrived under your own steam – cars and motor bikes are strictly for sissies.  Despite all of this John and his friend Martin are hooked.

And so John, Martin and their friend Joe embark on a lifetime of adventure in the hills of England and mountains of Scotland, Europe and even North America. For their first trek along the peat bog ridden Pennine Way Martin wears his Tuff school shoes (remember those?).

Walkers, these days the mainstay of many a northern hostelry, are banned from most cafés. The owner of the only one in Edale prepared to admit them doles out sugar in resentful teaspoonfuls. When the trio finally reaches Kirk Yetholm, the famous fund set up by one Alfred Wainwright to provide a pint for thirsty walkers has run out of money. (‘”Wainwright! What a bastard!”’)

I would probably have given up there and then, but these boys are made of sterner stuff, and by 1976 they are on their first excursion into Scotland. Here they are caught out by a sneaky reservoir not on Martin’s 1954 map, and end up having to spend a night with nothing to eat but two biscuits that should have been three.

Nevertheless, and despite being eaten alive by the ubiquitous midges, John’s love of the Highlands is undiminished – there are no Keep Out signs, no crowds of day trippers.

‘We are the only people in this vast landscape’

‘I feel as if I have travelled into a new and different world.’

They soon discover the joys of Highland bars, where the menu may be limited to peanuts but the miserable concept of Last Orders is often unknown.

‘I have wandered into paradise.’

When John starts his social work training in Sheffield, he finds himself at the epicentre of the climbing world – but it’s not all about the hills, and there are also fascinating stories of the people of the Yorkshire mining communities, and the dire dental results of working at the local Bassett’s sweet factory.

In winter, tourists go home and serious climbers, many of them resident ‘refugees from the urban sprawl’, take over.  The friends’ first attempt at a winter climb ends in a terrifyingly close shave with death – and one that is nothing to do with hills and far more to do with the traction of a Morris Marina outside a filling station.

Winter climbing becomes John’s main interest and he and Joe eventually climb Mont Blanc. To me this entire experience sounds like a particularly unpleasant form of hell. From the precipitous nature of the climb itself, to the huge crowds of people climbing it. Then there is the night John and Joe spend under a table (their ‘allotted space’ in the Gouter hut, half way up the mountain), with ‘middle-aged Germans with prodigious beer guts’ sleeping above them. And that’s without the drama of a serious and sobering accident (for once not theirs).

It is, then, a proof of the author’s storytelling skills that I still found this section of the book riveting.

When John is offered a choice of jobs, one in Tower Hamlets and the other in Inverness, it is no surprise that he chooses the latter. More climbs follow, many in the company of the unemployable gung-ho Charlie.

John also joins the Cairngorm Mountain Rescue team, and gives us a most enlightening insight into this close-knit world. Despite all that we see on television, it seems that the members deprecate any criticism of people who get into difficulties.

As the years pass, John changes direction, becoming involved in performance poetry, stand-up and storytelling. In 2010, he brings his first one man play, Aleister Crawley: A Passion for Evil, about the infamous climber, traveller, linguist – and occultist, to the Edinburgh Fringe (and tours it throughout the UK), and returns in 2014 with his second, Mallory: Beyond Everest. It is, he acknowledges, at least in part the adrenaline rush of climbing, and the camaraderie of the climbing community, that he seeks to find in his new activities.

Latterly John has rediscovered the pleasures of Highland bothies, those remote and basic shelters maintained by the Mountain Bothies Association for the use of walkers and climbers. His visits to these are often the source of more comedy – his escapade with an ancient paraffin stove is eventful to say the least. It seems unlikely that the two German hikers who witness this will be back in a hurry – but they also provide moments of pure joy – the sight of black grouse ‘dancing’, the breaking of a stunning Highland dawn.

The book ends with a fitting postscript as John, Joe and Martin reunite in a cosy bothy, outside which the wind roars and the rain pours. And here they make a plan to revisit the Pennine Way forty years on from that first peaty trek. For although time has passed and lives have been lived, they have not lost their love of the hills.

I came to the end of this book with real regret, so immersed had I been in John Burns’ world. Do read The Last Hillwalker; it will both entertain and inspire you. 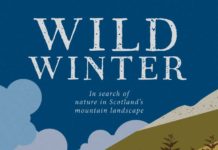