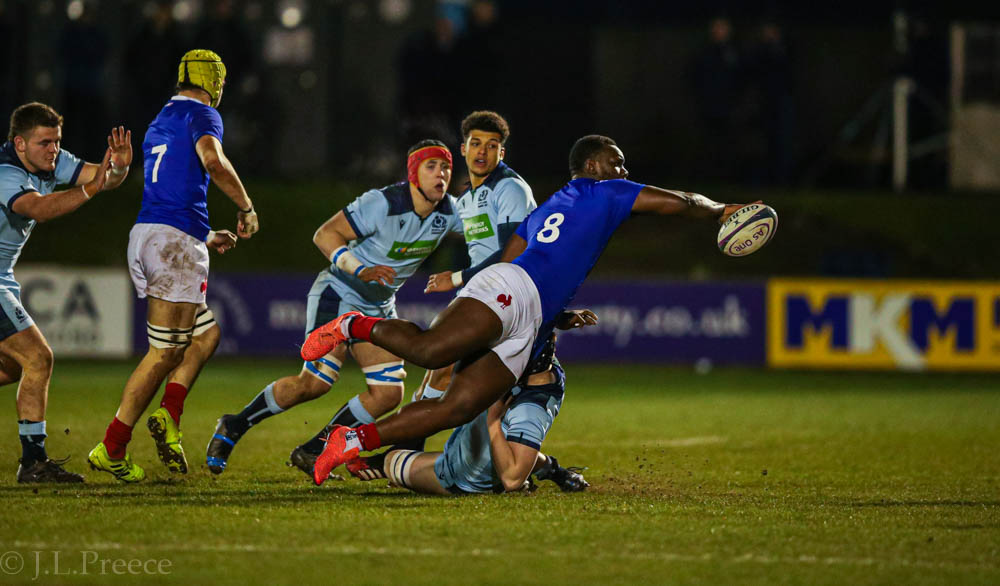 Scotland’s fourth round match in the U20 6 Nations Championship was played under the gathering cloud of the Covid-19 virus ‘situation’ with France as their latest opponents. Coming off the back of a dominant performance, but a loss, against England and a win in the previous round against Italy, hopes in the Scots’ camp were high that this could be the turning point in this year’s tournament.

The match started at a blistering pace with both sides putting pressure on the opposition, but, with both defences being up to the mark, a kicking battle ensued to establish some territorial dominance.

France probably had the better of the early exchanges, but once the home side got a bit of sustained possession, they looked equally dangerous on the break.

The first points came after 17 minutes when an offside penalty from a close-in line out gave the Scots a chance to open the scoring, Nathan Chamberlain doing the honours for 3-0.

A poor clearance kick soon after the restart, left the French with a good position to launch an assault on the Scottish defence and the ball was whipped out to the left wing where their No. 8, Jordan Joseph was waiting.

He then blasted up the line, swiping the final tackle aside to dive over for the try. Centre, Joris Moura, then converted for 3-7 after 20 minutes.

A soft penalty a few minutes later landed Moura his second successful kick of the game for 3-10 with 15 minutes of the half left.

Scotland then came roaring back into the game and drove deep into the French 22. The pack did their bit to hold the defence in close, before the back division went in for the kill. The ball was slung across the field and the final ball to Rufus McLean, saw the wing over in the corner.

Chamberlain then made amends for his earlier loose clearance with a superb touch line conversion for 10-10 after 28 minutes.

Then it was France’s turn to pressurise the Scots. Pushing the defence back with a running and passing drive, a penalty for a high tackle, and subsequent kick to touch, gave them field position in the home 22. Driving at the line, the final offload to Erwan Dridi put the full back in for the points.

Moura then followed up with the conversion for 10-17 after 32 minutes.

In what was looking like it might become to be a try-fest, Scotland were next on the board another two minutes down the line.

A breakdown penalty put the home side within a few metres of the French line and the following catch and drive took play into the centre of the pitch. The ball went out from hooker, Ewan Ashman, to Roan Frostwick.

Frostwick then popped the ball up for wing, Jacob Henry, leaving the No. 11 with a straight run in under the posts. Chamberlain then knocked the conversion over for 17-17 as the sides went into the break.

France possibly had the better of the early exchanges in the second half, causing a bit of trouble in the opposing defence, but also managing to resist a Scots’ attack, before clearing upfield.

Their break came from a quick tap penalty which immediately put the Scots’ defence on the back foot and from there, the defence was scrambling.

With play bunched centre-field the, what looked like, inevitable try came from a cross-field kick into the goal area from their 10, which was chased through and dotted down by wing, Nathanael Hulleu for 17-22 after 48 minutes.

The French continued to have the upper hand over the next period of play, despite a missed penalty from Moura, but Scotland blew their best chance with a poor line out drive off the top of a five metre set-up.

When the subs starting to appear, then France began to dominate the scrum and open play.

They had to wait, however, until the 67th minute before adding to their tally.

The Scottish pack was blasted apart from home-side, 5-metre scrum, the drive taking play up to the line. Now over the ball, lock, Joshua Brennan had the, fairly, easy task of picking it up and falling over the line for the bonus-point try.

Stand off, Thibault Debaes, then slotted home the conversion for 29-17 with seven minutes left on the clock.

And, for the home support, what a seven minutes. With France down to 14 from the restart, Scotland piled on the pressure, but, despite three close in penalties in the time, they could only come up with one try – unconverted – when Ashman was driven over for 29-22.

Another late surge came to naught for the Scots when, with seconds left on the clock, a ‘crossing’ penalty gave France the ball and the 29-22 win after a tough contest.

The final result was slightly overshadowed by the news that one of the Scottish women’s side had tested positive for Covid-19 and was under medical supervision. She was reported to be doing well, but another seven of the squad and backroom staff have self-isolated themselves as a precautionary measure.

As a result of this development, the match, due to be played at Scotstoun on Saturday evening has been postponed until a later date.