Paul Crowder replied for the visitors five minutes later and the scoreline stayed the same until 19 seconds from the end of the middle session.

Anthony Beauregard scored the fifth on an empty net with 51 seconds left after Fife gambled by withdrawing their netminder.

Ice hockey – Clan out of cold storage with first signing 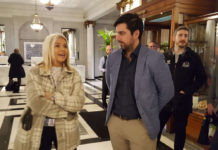