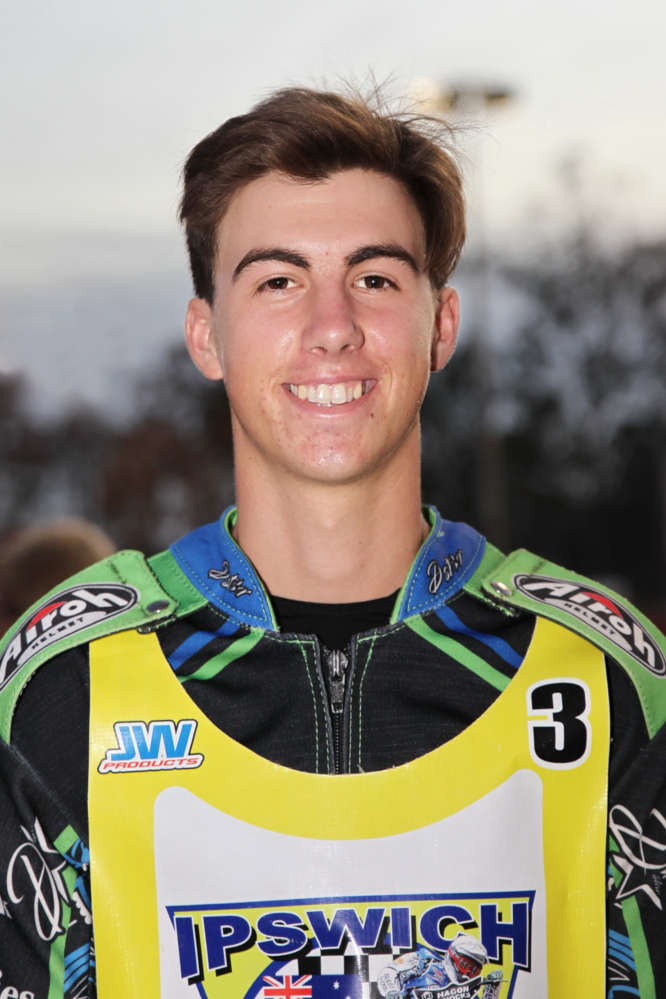 Edinburgh Monarchs have completed their team for 2020 with four men named to back up the three heat leaders, Sam Masters, Richie Worrall and Josh Pickering.

William Lawson (Scotland), James Sarjeant (England), Kye Thomson (Australia), pictured right and Lasse Fredriksen (Norway) make up the septet and the latter two will be racing in British Speedway for the first time.

Kye Thomson brings the number of Aussies in the team to three. He is 21 and only started speedway in 2016.

Thomson said: “It is about time to come to the UK. Josh Pickering is a good mate of mine, we grew up racing together in flat track.

“I have bought two good bikes which are sitting over in Britain ready to go. Josh has told me all about the Armadale track. I know he rides it well. I’m keen to get next season started, and I’ll be over in March.”

Half a century ago Monarchs had a couple of outstanding Norwegian riders and 22-year-old Lasse Fredriksen hopes he can follow in their footsteps.

He said: “Yes I feel really ready for it. I think I have lacked meetings so coming to the UK will be the answer, riding much more.

“Armadale is a difficult track but I liked it. It is a home track, you know? If I can practise on it I will get to know the lines. I like the small technical tracks better than the long ones, I’ve always done better on the smaller. I think when I get used to it, it will be all right.”

James Sarjeant had a short but successful spell with Monarchs last season and his return will be welcomed. Remarkably for a rider at No 2 he had just a single last place in 25 rides for Monarchs at Armadale last season.

He said “Being with the Monarchs from the start will definitely help and I am looking forward to there being more fixtures as well, sometimes I had two or three weeks between meetings and that’s not what any rider wants.

“So, with riding more then I will be better prepared and I can’t wait to get going again.”

William Lawson was a Monarch as long ago as 2005 but of had a eight-season gap in his career before returning late in 2018. He improved over the course of 2019 and intends to keep that going next summer.

All announcements, of course, are subject to BSPA approval.