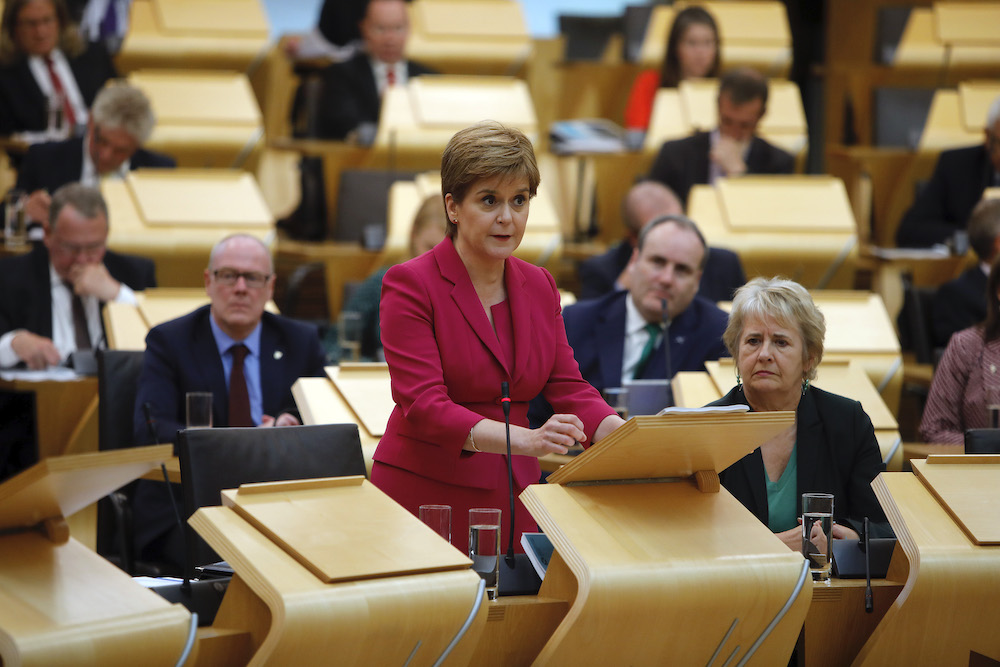 Today at The Scottish Parliament it was back to school for MSPs as the First Minister announced the Programme for Government 2019-20. Importantly for Edinburgh this includes provision for the Transient Visitor Levy Bill – or tourist tax. It will be introduced here in Edinburgh first as the council has already set out the structure for it.

The plans include proposals on ending the country’s contribution to climate change with steps to tackle it. Among other measures a £500 million investment to improve bus infrastructure was announced. This news was welcomed in Edinburgh where the bus company is one of few in Scotland owned by the local council.

“However the impacts of ever increasing congestion must now be dealt with to ensure that bus can deliver against this positive announcement today from Scottish Government. This will give the opportunity of additional investment to enhance measures already being implemented by operators to encourage active travel and modal shift.

“We look forward to working on proposals with both National and Local Government to address the impacts of ever increasing congestion and further speed up journey times to enhance the public transport offering for customers across our capital city and surrounding areas.”

A wave of schools will be built or refurbished through a new £1 billion school investment programme which will be announced later this month.

The Child Payment which will benefit low income families with young children by £5000 a year will be brought forward and introduced by Christmas 2020.

There are other measures like the Green New Deal which will create a £3 billion package of investments to attract green finance through the Scottish National Investment Bank. Renewable heat projects will benefit from support of £30 million. And in the mix the Scottish Government also confirmed that they will be planning to try and reduce the effects of a no deal Brexit. The government will also proceed with the Referendums Bill for transfer of power to hold an independence refereundum within the term of this parliament.

The First Minister said:“This Programme for Government will put health, prosperity and wellbeing at its heart, and will reinforce Scotland’s place as a dynamic, open, innovative economy.

“In the last 12 months we have made important progress in creating a better and fairer country and this year’s Programme for Government builds on that record.

“Earlier this year, I acknowledged that Scotland – like the rest of the world – faces a climate emergency. We are now committed to achieving net zero greenhouse gas emissions by 2045 at the latest – earlier than any other UK nation.

“This year’s Programme for Government is an important part of our response to the climate emergency, containing measures which will reduce emissions while supporting sustainable and inclusive growth.

“It sets out actions which will make a difference for years to come. It details measures which can help make our country the best in the world to grow up, learn, work and live. It meets the challenges of the future, while staying true to our enduring values.

“However, alongside these crucial steps, we will continue to plan for the possibility of a ‘no deal’ Brexit and, as long as this remains a risk, the Scottish Government will work as hard as we can to mitigate the impact on families, communities and businesses across the country.”

The Scottish Conservatives claim that Nicola Sturgeon has used her programme for government to try and force through a second referendum on independence. The First Minister confirmed today that she will seek the “transfer of power” from Westminster so the SNP can officially call the vote. Ministers have even admitted they will overhaul the discredited 2014 White Paper on separation to ramp up their bid to break up Britain.

Ms Sturgeon told MSPs: “I can confirm today that, during the passage of the Referendums Bill, we will seek agreement to the transfer of power that will put the referendum beyond legal challenge.”

And the nationalist government confirmed in its small print published today: “The Scottish Government produced a comprehensive plan for an independent Scotland in 2014. The government will now undertake the necessary work to update that plan and ensure that people have the information they need to make informed choices over the future of the country.”

At the centre of the original White Paper were plans for Scotland’s oil industry to financially sustain a separate state, bringing in revenues of up to £10 billion a year.

But today, the First Minister said her government’s support for the oil and gas industry was now only “conditional”.

Scottish Conservative interim leader Jackson Carlaw said:“It’s typical of the First Minister that her statement both began and ended with independence.

“It really is the be-all-and-end-all for her nationalist government.

“Not only did she confirm her plan to push ahead with an unnecessary and unwanted referendum bill.

“But we also learned the utterly discredited White Paper from 2014 is finally set to be binned.

“Perhaps, because she discards it altogether, she should apologise to the people of Scotland for the deceit contained within it.

“The people of Scotland have had enough of this. They simply want Nicola Sturgeon to give it a rest.”

During today’s statement on the Programme for Government for 2019-2020, Scottish Labour Leader, Richard Leonard MSP, used his time to outline the failure of the SNP government to deliver on promises. He raised the fall in Higher pass rates for the fourth consecutive year despite the First Minister stating that ‘closing the attainment gap and raising standards in our schools remains the Government’s overriding mission’ just last year.

He also challenged the First Minister to quicken the pace of change on Children and Adolescent Mental Health Services after new figures today highlighted that more than 30 per cent of young people are waiting longer that the 18week target time.

At the weekend, Nicola Sturgeon said in the face of Brexit, said that ‘it is more important than ever that the Scottish Government continues to act in a calm, considered and consensual way’. Responding to this, Richard Leonard asked:

“Can the First Minister tell us:

“So given that the First Minster is calling for consensual working can I ask her, to back our plans

Scottish Liberal Democrat Leader Willie Rennie said:“People across the country are paying the price for this government’s ineptitude.

“Last year when I responded to the programme for government I complained that mental health waiting times for young people were unacceptable. Back then 208 young people had waited more than a year. Today, one year later, that number has more than trebled to 735.

“This a government whose eye has been taken off the ball because their primary focus is on independence. Communities shouldn’t lose out because of the SNP’s constitutional obsessions. Liberal Democrats demand better for our public services.”

The commitments to district heating in the programme for government do not go far enough to ensure all Scots have warm homes, the Scottish Greens have said.

In her plans for the year, Nicola Sturgeon announced a Heat Networks Bill and a consultation on new buildings regulations.

Responding, Scottish Greens environment and energy spokesperson Mark Ruskell said: “£30m for innovative low carbon heating projects is a flash in the pan, not the kind of transformational change Scotland needs, and which I called for this summer.

“Heating our buildings accounts for half of Scotland’s greenhouse gas emissions. Meanwhile, a quarter of all homes in Scotland are in fuel poverty.

“The Scottish Government should be committing to massive expansion of low carbon heat networks and dramatically reduce emissions from heating by retrofitting inefficient homes and bringing forward regulations on new buildings now.

“The Scottish Green New Deal, which we launched last week, proposes more ambition on this including a programme of deep retrofits and the requirement all new homes meet passivhaus or other net-zero standards. The climate emergency requires an emergency response, not tinkering round the edges.”

Environmental campaigners have welcomed a range of commitments in today’s Programme for Government but emphasised that is does not go nearly far enough to truly tackle the climate crisis.

Friends of the Earth Scotland Director, Dr Richard Dixon, said:“This package includes some very welcome commitments but is not nearly enough to address the desperate climate emergency the world is facing. The obvious contradiction at the heart of this Programme is its commitment to some new measures in transport, heating and agriculture while continuing to back the offshore oil and gas industry to keep on drilling and destroying our climate.

“The Climate Emergency should signal a radical change of direction, especially when it comes to planning the end of oil and gas extraction from the North Sea. Instead we heard of an increased focus on Carbon Capture and Storage and hydrogen, both dangerous distractions, which risk prolonging that industry and taking the focus away from real, sustainable solutions to the climate crisis.

Shona Struthers, Chief Executive of Colleges Scotland, said:“I am pleased to see that colleges continue to be highlighted as integral to a number of key priorities within this year’s programme for government.  It shows that the college sector in Scotland is responsive, flexible and resilient and able to deal with both the opportunities and challenges of the future including innovation, digital skills and new technologies.

“We welcome the announcement that a medium-term estates strategy for the college sector will be developed to help prioritise investment and we look forward to contributing to this fully.  Modern, state-of-the-art facilities will be key to enhancing the student experience and delivering a skilled workforce that is fit for the future.

“The new Climate Emergency Skills Action Plan is one such area that the sector is ready to step up and contribute to.  Colleges are already leading the way in this area, working with the renewables industry to deliver the technical skills and apprenticeship programmes required to meet demand.

“We are also looking forward to working with the Scottish Government to take forward its Future Skills Action Plan to ensure that the skills system is enhanced and can provide more opportunities for individuals and businesses which will increase productivity and deliver inclusive economic growth in Scotland.

“The continued focus on widening access, delivering apprenticeships programmes and increasing the early learning and childcare workforce is also welcome and colleges will continue to successfully deliver on these priorities.”