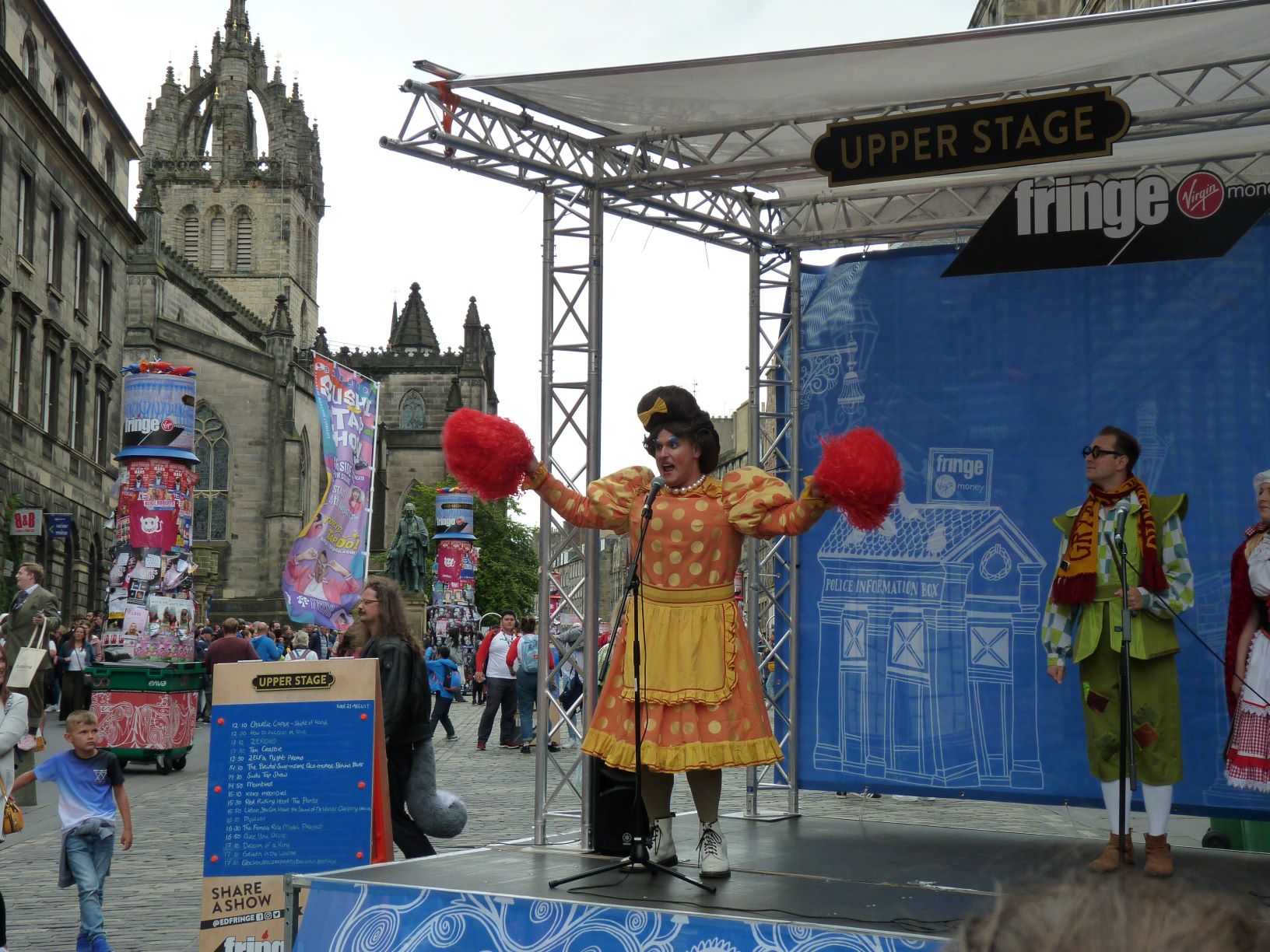 So, the “Festival” is almost over and the Old Town can return to its quiet ways – and count the cash. The various festivals over the last three weeks  have brought around half a million people to the city and pumped  some £300m into the economy.

It’s been a great show, as usual, with over 3,000 productions, from serious concerts at the Usher Hall and grim plays and operas at the Festival Theatre to cabaret and comedy in dingy upper rooms on the Fringe.  Oh, and we mustn’t forget the tented village at the Book Festival.

As we reclaim The Royal Mile from the street performers, thoughts have already turned to “lessons learned” and next year’s Festival.  There are aspirations to move some productions out of the city centre to give everyone more breathing space and to spread “culture” into parts of the city the Festival never reaches.  There are hopes too that the Festival can remain truly international, despite the dark cloud of Brexit on the horizon.

And something really must be done about the boom in Airbnb. Over 7,000 homes are now given over entirely to visitors, adding to the festival crowds and driving up accommodation prices.  Most of these Airbnbs have not registered as businesses, as they should, and have thus escaped regulation. And the thousand who have registered, have taken advantage of the rates relief given to small businesses and thus pay no local taxes at all.

But home-owners are not the only ones who have jumped on the Festival bandwagon this year. The politicians have used it as an easy campaigning platform, taking part in those increasingly popular celebrity interviews. The first minister herself, has been both interviewee and interviewer.  And Nicola Sturgeon was followed by a cast of A-listers…..Gordon Brown, Kezia Dugdale, David Mundell, Ruth Davidson and the shadow chancellor John McDonnell who sparked yet another skirmish in Labour’s civil war when he announced that a Labour government would allow a second referendum on Scottish independence.

The independence issue took its usual place on the stage at this time of year with the publication of the GERS figures, the government expenditure and revenue in Scotland. They showed that the deficit between public spending and taxes was £12.6bn. That’s better than last year but still a deficit of 7 per cent of the national income or £2,000 per head of population. The Unionist parties say it’s a warning that Scotland could not go it alone. The SNP say it’s only a starting figure and an independent Scotland would grow its economy soon fix the deficit.

Out in the countryside, meanwhile, farmers have been struggling against the wet weather and the uncertainties of Brexit.  One study, from the agricultural consultants Andersons, predicts an 18 per cent drop in average farm income if there’s a no-deal Brexit. Already the Scottish beef industry is suffering from an influx of frozen beef from Ireland which had been stored in the run-up to the last Brexit deadline in June.  Harvesting of the wheat and barley crop has been held up by torrential rain and farmers’ union says only a dry September will make it “salvageable.”

This week’s salvage operation has been the nationalisation of the last civilian shipyard on the Clyde.  Ferguson’s shipyard has been taken over by the Scottish government after it ran into huge cost over-runs in the middle of building two ferries for Caledonian MacBrayne.  The man who saved the yard the last time it was in trouble in 2017, Jim McColl, said the costs virtually doubled because of the pioneering engineering involved in building ferries  able to run on liquefied gas as well as diesel.  The government will now have to turn its £45m loan into shares and hope that the yard can complete the ferries and win new contracts in the future.

Now let me take you to the island of Canna in the Inner Hebrides.  The 18 islanders face an awkward choice. Should they welcome a new 8-pen fish-farm of not?  It’s been proposed by the large Norwegian salmon producer Mowi who say it’s going to be a new-style organic fish-farm, less intensive than two other farms they will be closing on the mainland and it will employ 10 people.  The National Trust, which owns the island, has objected to the proposal on the grounds that the fish farm will produce as much sewage waste as a small town and it will deter the growing tourist trade from visiting yachts and cruise ships. It’s a dilemma faced across the Highlands and Islands…preserve the environment or exploit it…or is there a middle way ?

Finally, Scotland has won back its rightful place as the winners of the World Pipe Band Championships.  The heroes of the hour are the Inveraray Pipe Band who blew and drummed into second place the Field Marshall Montgomery Pipe Band from Northern Ireland who’ve won the title 12 times in recent years. Some 30,000 people turned out on Glasgow Green last weekend to hear the 195 bands from all over the piping world.

It was an international festival to rival Edinburgh’s, and without all the ballyhoo.