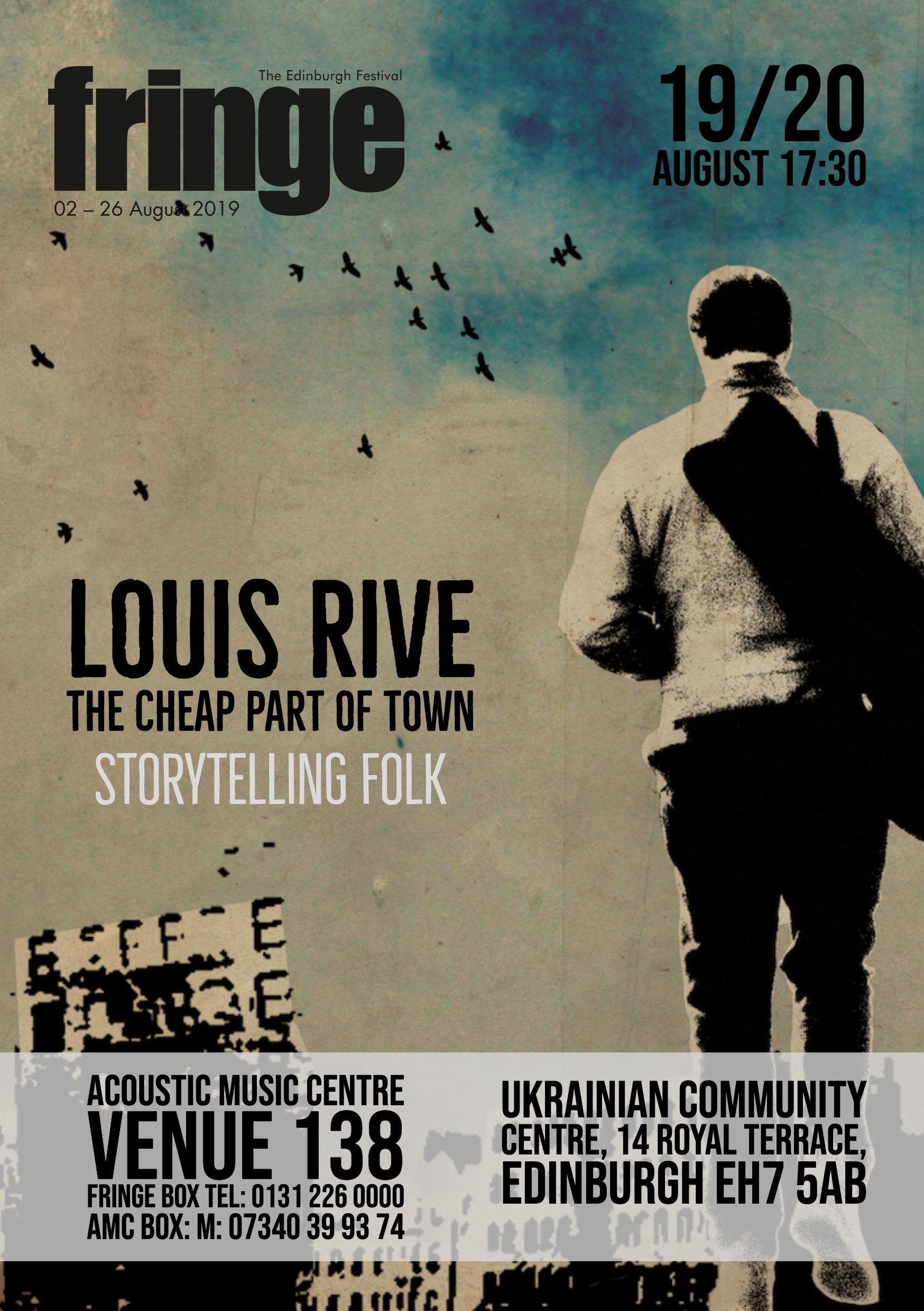 The Edinburgh Ukrainian Club in Royal Terrace may become the Acoustic Music Centre during August, but its bar is still decorated with a fascinating mixture of Eastern European photographs, pictures, candlesticks, ornaments and beautifully embroidered scarves. Folk music feels at home here, so it’s a fine setting for Louis Rive, even if this talented musician does live in Barcelona and arrived there by way of Scotland. The music of the people is still the music of the people.

Songs of early morning London bus rides and seedy clubs (Street Lights), of growing up in Edinburgh (Mulberry Mews, a fictional Every Street with its bored teenagers, corner shops and care home – ‘lovers and loners and fools’) and of watching Georgia v Scotland in a seedy ungentrified bar in Roman Road, E3 (Spit and Sawdust) are full of sharp observation – the soggy chips left on the cobbles, the brown paper bags the shop provides for its ‘adult’ magazines, the free cockles still served up with a pint of special in the pub. Married Life is one of Rive’s takes on the traditional Scots ballad – what happens if that romantic Gretna Green wedding doesn’t end in happy ever after?

Rive also looks to history for his stories. The soldier returning from the ‘Great’ War is not a hero but a drug addict; Lowlife is about one of the many men who came back with serious mental health problems – problems that were ignored and covered up in favour of the glorification of victory. Going further back in time, a soldier in Francis Drake’s fleet sings about life in the South Americian jungle on Drake’s final, abortive mission to seize gold for the English Crown. The laid-back, resigned air of this song contrasts with the dreadful plight of the abandoned men, who;

as they trudge through the fever-ridden swamps.

The Welfare State, meanwhile, looks at what people have to go through today to get any state benefits, and at what Rive describes as :

‘The controversial feeling of being British at the moment.’

This song, with its shades of Ralph McTell, has a slower, more wistful, tempo than many of the faster, punchier numbers.

Rive ends his show with an upbeat, unusual song John Paul Jones, about the Kirkcudbright gardener’s son who, in 1775,  ended up joining the American colonies’ Continental Navy and fighting the British in the American Revolution – ‘the ultimate rebel’. This is perhaps the most exciting song of the evening, with a great crescendo followed by a slower, gentler close.

Rive has a strong, often gravelly, voice and an easy, friendly rapport with his audience. He’s a traditional storyteller with modern stories to tell and an engaging way of telling them.