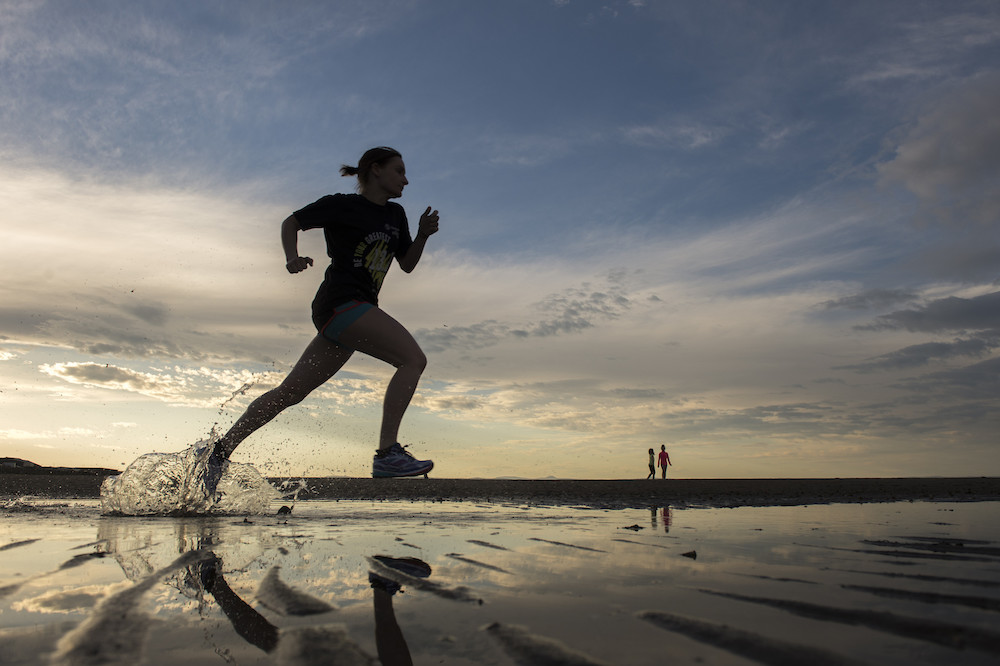 A student’s powerfully honest account of how she lives with multiple sclerosis and continues to embrace her passion for running is taking centre stage at Edinburgh Napier’s Degree Show this week.

MA Motion Graphics student Kate Charter has produced a short film called ‘Running with Helen’ in which the 29-year-old reflect on her own diagnosis along with speaking to others about their own experiences with the condition.

Multiple sclerosis (MS) is a condition that can affect the brain and spinal cord,
causing a wide range of potential symptoms, including problems with vision, arm
or leg movement, sensation or balance.

Despite this – as the title of the film suggests – Kate has continued to embrace her passion for running and has even formed an Edinburgh MS Runners group which meets regularly for casual runs at various locations across the city.

Kate started running when she moved to Edinburgh in 2008 to commence her university studies and soon caught the running bug. She completed her first marathon in 2009 along with half marathons, 10ks and mud runs in between.

It was during marathon training with her friend Katie in 2015 that Kate was forced to go to the doctors after showing symptoms of MS.

After recovering from her initial diagnosis, she was desperate to re-join Katie and
started accompanying her for the last couple of miles of her training runs on her bike.

However, it wasn’t long before she was back running, using the time pounding the
pavements to reflect on living with the condition by doing short pieces to camera about how she was feeling.

A number of these short clips feature in her Degree Show film, with Kate naming
her MS as Helen – a separation that helps her accept the condition and remain
true to herself.

Alongside the physical benefits of running, sticking with her passion has allowed Kate to appreciate life and make the most of what she has.

She said: “I’ve always filmed a lot of stuff in my life and I’ve always made
highlight films at the end of each year. It felt natural to film myself running
after I was diagnosed.

“I’ve been wondering what to do with the clips for a while and I grappled with using MS as a subject for my major project. I usually don’t talk about it much as I thought it might get me down. However, that also implied that I should, because there was a problem that needed fixed – and as an MS filmmaker and animator, I might be able to do something about it.

“For the film, I wanted to add a voice that talked about MS in an honest way, to try and give people a realistic, everyday account of one person’s life with MS. I
hope it leaves MSers and non-Msers knowing that life is pretty good and you
never know what it’s going to throw at you so you might as well make the most
it while you can.

“Since I’ve been diagnosed, running for me has more purpose. I used to go because I loved to eat, and I love big run events, which are more fun when you have done at least a bit of training. Now I also go because I know that it helps my health long term and it makes me feel strong. I value the mental health
benefits a lot more now too.”

Kate’s passion for running has seen her form an Edinburgh MS Runners group that continues to grow.

Running with Helen from Kate Charter on Vimeo.

Edinburgh and its multitude of running locations has also played a part in her love for the sport, with the city offering plenty of opportunity for Kate and her friends to get out and about.

She added: “Running helps my core strength and balance, and does wonders for my head and general attitude to life. If you can, then I would say go for it. I
know some people will hate running and I’m not trying to convert them. It’s
more about finding something that makes you feel strong and happy.

“If running is your thing, then Edinburgh is the best! I love going along the sea,
I’ve run up to Bo’ness and down as far as Aberlady from town. It’s beautiful.
Then you’ve got Arthur’s Seat, the Meadows, the canal, the Water of Leith and
many others. There are so many options.

“The MS Runners group welcomes people of all abilities. We chat in general about
running and meet up for casual runs in the Meadows and occasionally at the Park
Run at Cramond. It’s hard to run on our own sometimes so the company is much
appreciated.”

‘Running with Helen’ along with hundreds of other projects are on display as part of the Edinburgh Napier Degree Show which is being held at the University’s Merchiston campus from 17-24 May 2019.

For more information on the show, please visit www.napier.ac.uk/degreeshow

An equilibrium not of this world for the Edinburgh Art Festival

Tenth Edinburgh Marathon off to a good start

Oxfam need you to run a marathon for them in Edinburgh

Can you complete 2012 km for charity this year?