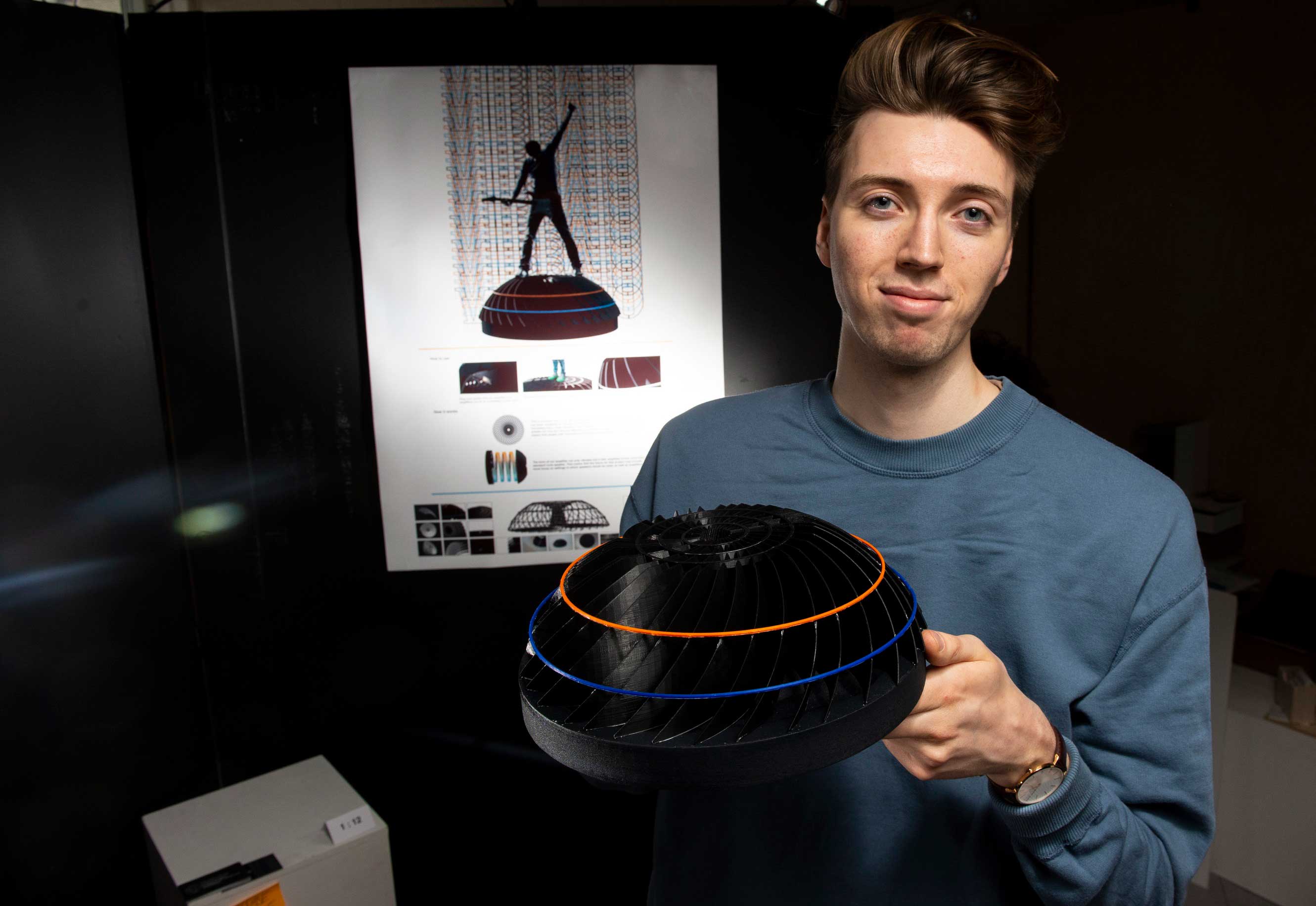 Musicians with hearing impairments could soon be benefitting from an enhanced musical experience thanks to a device being developed by an Edinburgh Napier product design student.

As part of his Edinburgh Napier Degree Show exhibit, fourth year Daniel Pilley has
designed a device that allows hard of hearing musicians to feel the vibrations
of certain instruments.

His prototype – which could be built into the body of a guitar amp and see the
player stand on top of the device to feel the music alongside hearing it – aims
to give sound a physical body and thus improve the overall musical experience
for musicians with hearing difficulties.

The device’s spherical shape resembles an upside down speaker and helps transfer vibrations from the amp to the player’s feet.

Many musicians with hearing impairments play bare foot so that they can feel the
vibrations of their instruments but the device aims to build on that even further by helping the sound travel through the player’s body, helping them understand and ‘feel’ the music more than previously.

22-year-old Daniel – from Langholm in Dumfries and Galloway – has been a musician himself since learning bass trombone in primary school.

His project has been influenced by many years of being surrounded by instruments that create strong vibrations alongside their sound.

The idea to create the device was sparked on an Erasmus exchange in Oslo, Norway, last year after listening to a song and being saddened at the thought that not everyone in the world had the option to enjoy it.

Daniel has now – through the support of Edinburgh Napier’s Bright Red Triangle
entrepreneurial hub – taken the first tentative steps in creating his own
business to develop the device further as his dream of making the sound market
more inclusive gets ever closer.

He said: “First and foremost, I’m a musician myself and for my final year project,
I really wanted to design something with a purpose that could potentially benefit many others experiencing a certain problem or issue.

“Since playing bass trombone and percussion in bands through my primary and secondary school years, I’ve always been surrounded by instruments that have vibration as an integral part for them – there’s no doubt that this project has been influenced by this.

“It’s been a journey to get to this stage with the device. I’ve been thinking
intently about where sound can travel to and where it can go. I’ve tried
prototyping mouthpieces and headpieces as I attempted to develop something that could potentially benefit musicians with hearing impairments.

“I think I’m there now with this specific device but I really need guidance and
help from sound and acoustic experts to help take it to the next level. It’s by
no means a finished product, but it is an idea I’m excited about and keen to
take forward.

“All through this project, I’ve had the aim of pushing the sound market in a
direction that is a bit more inclusive than it already is. I want to be able to
give people at least the option to be able to enjoy music again – something
that they might have thought had previously been out of their reach.”

Daniel’s project along with hundreds of others are on display as part of the Edinburgh Napier Degree Show which is being held at the University’s Merchiston campus from 17-24 May.

For more information on the show, please visit www.napier.ac.uk/degreeshow