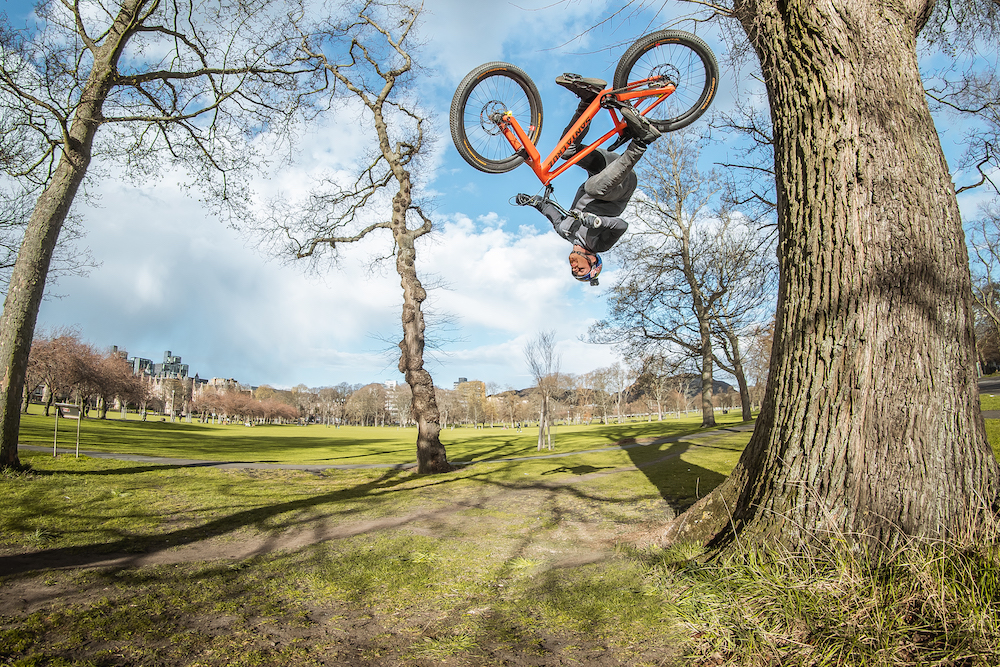 Interviewing Danny MacAskill is a very easy affair. He really is as laid back as he makes all the stunts look on his videos, and he has lots to say.

It may only have been last night that he flew in from California, but there was just a tiny hint of jet lag – and none at all when he offered to perform a couple of stunts for me! He is still part of the Red Bull family as he has been for the last ten years.

He said Red Bull have given him lots of support over the last decade since his first video showing off his cycling skills was published on YouTube. He used places like Edinburgh Castle as a playground for some of the spectacular stunts. Since then it has had over 38 million views.

To celebrate the key milestone Danny and his colleague Duncan Shaw will return to Edinburgh this summer with a family friendly show with an element of audience participation.

It was a real pleasure to hang out with @danny_macaskill this morning and find out about his @edfringe show pic.twitter.com/gbmLgPKCjQ

He is bringing his Drop and Roll Tour to the capital this year in a debut Edinburgh Festival Fringe show. Edinburgh still feels like home although he did admit that Bristo Square has changed a bit since he used it as a backdrop to his cycling videos.

Danny said : “That video certainly kicked off a career that I could not have imagined having. It’s amazing what the internet can do and the opportunities it can open up.”

Prior to that Danny had worked in a bike shop in Aviemore for a few years after leaving school and his home base of Skye. He explained why he moved to Edinburgh. He said :”Once I had ridden all the places in Aviemore I fancied moving to a city and Edinburgh was the first port of call. I saw it as not too big, more like a big town.

“It is a perfect backdrop for a video. My focus was very much about trying to find the coolest riding I could find. I had lived in the city for maybe about four years and I had these dream tricks that I thought about trying. It wasn’t until my flatmate offered to make a video that I started looking at these tricks seriously.”

All of that is now in the past and since hitting the road in 2014 the Drop and Roll Tour street trials display team have performed shows in Scotland, England, Germany, The Netherlands, Switzerland, Czech Republic, Poland, South Africa, Philippines, Indonesia and the USA.

Watch out for him cycling on the streets of Edinburgh in August as he thinks he will have enough energy left to have a bit of fun on a bike around the city.

Danny MacAskill’s Drop and Roll Live, with an exceptionally talented team of riders including Drop and Roll’s co-founder and fellow Scot, Duncan Shaw, will be performed at The Lafayette.

Venue: The Lafayette at Underbelly’s Circus Hub on The Meadows