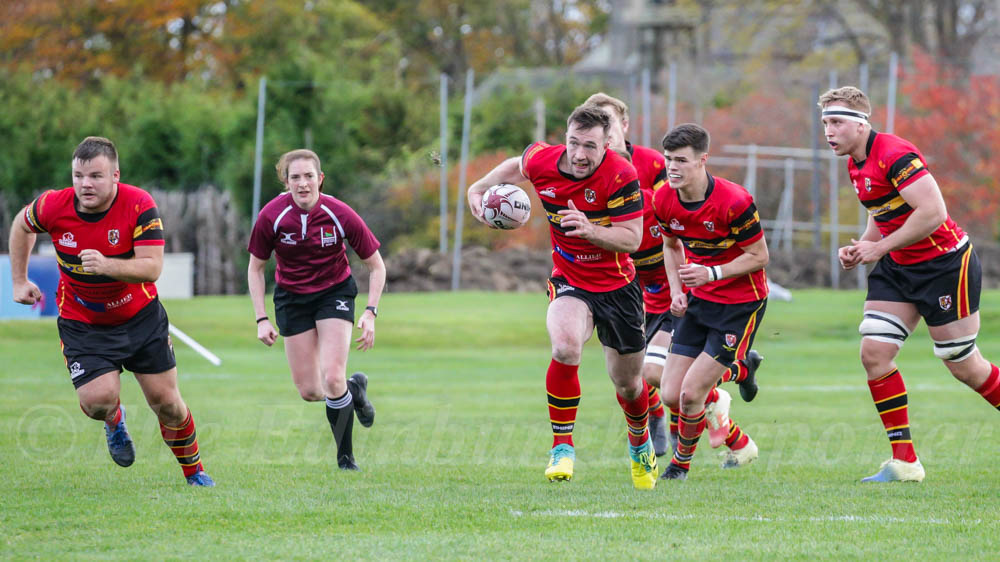 Good to be home on familiar pastures once more. It seems we can never avoid Howe as we both ‘duck and dive’ within the national league structure. Despite their lowly league position, the stats clearly show that they can score tries. A familiar looking home squad appeared on an almost sun kissed Inverleith with a notable welcome return to the ‘unhamstrung’ James Ferguson. A reasonable number had taken to their usual seats in the stand both home and away in addition to the newly formed Stewarts’ Melville RFC Northern Ireland Supporters Club. With Howe arriving with only 15 players due to their increasing injury crisis, and no bench, regrettably the inevitable did happen.

From the start Stew Mel dominated and the first try wasn’t long in coming. A quick break by Charlie Simmonds, a simple pass out to the right to Sean Murchie followed by a remarkable conversion by Happy. The second try came soon after, as possession was lost and ultimately won and Adam Greig ran in under the posts. 15 minutes played Stew Mel 19 Howe 0. Then the first injury occurred to a Howe player, off the ball, which appeared to be a hamstring. To be fair the player did attempt to continue with a heavy strapping but it was only a matter of time before his afternoon was over.

At around 20 minutes with Howe down to 14 men, play continued in a similar manner and the tries started coming, this time after a quick tap penalty following a high tackle, Momo charged over. Stew Mel 26 Howe 0. Another restart, and another period of play resumed with Stew Mel either retaining or regaining possession and the fourth try came no 14’s way. Stew Mel 31 Howe 0.

30 minutes in and unfortunately another injury to Howe meant they were down to 13 and another fortuitous try for Stew Mel, this time Matthew Watson the recipient after a good break by Adam Greig. Stew Mel 36 Howe 0. Howe did however manage to get some points on the board due to an interception and after 35 minutes the score was at 36- 7. It wasn’t however long before another Stew Mel try came, bringing the half time score to Stew Mel 47 Howe 7.

I think it would be rubbing salt in the wounds of an extremely brave Howe team to continue to report fully on the second half. They never gave up and had an incredibly positive attitude, continued to attack and threw caution to the wind despite being completely overthrown as the imbalance in numbers took their toll. It says a lot however for the sport as a whole and the spirit that this game was played in although was sensibly brought to a premature end at around the 70 minute mark. I think our visitors can be immensely proud of their efforts regardless of the final score. Stew Mel 86 Howe of Fife 7.

I would also make special mention of, in particular, a couple of Howe players, their no 15 Sam Rowlands and their no 9 Andrew Harley who were outstanding throughout. What can be said of the team on the winning side of such a score line? Well done, you played to your strengths but still, as was always said at school, ‘room for improvement’ particularly in the execution of the basics.

Pick out the good bits of Saturdays performance and put them together for next week against Falkirk whom we know have been a bit of a bogie team of late and it’s worth noting that regardless of the circumstances surrounding Saturdays victory it was 5 points and now 3rd spot. Rather than note the names of all the point scorers, I think it would be more appropriate to mention the guys that didn’t score, namely Connor Mackay, Doug Randall, Ruaridh Mitchell, Alex Rapplestad and Alex Wainwright, all of whom were instrumental in creating the chances for those who did. The biggest challenge for me was texting the score and scorers to Ron Evans at the full time whistle but I was ably assisted by a mathematician aka #bestwag! Remember guys, an earlier kick off on Saturday and prohibition on Friday night – one can of Gen!us and some water (tap) only!