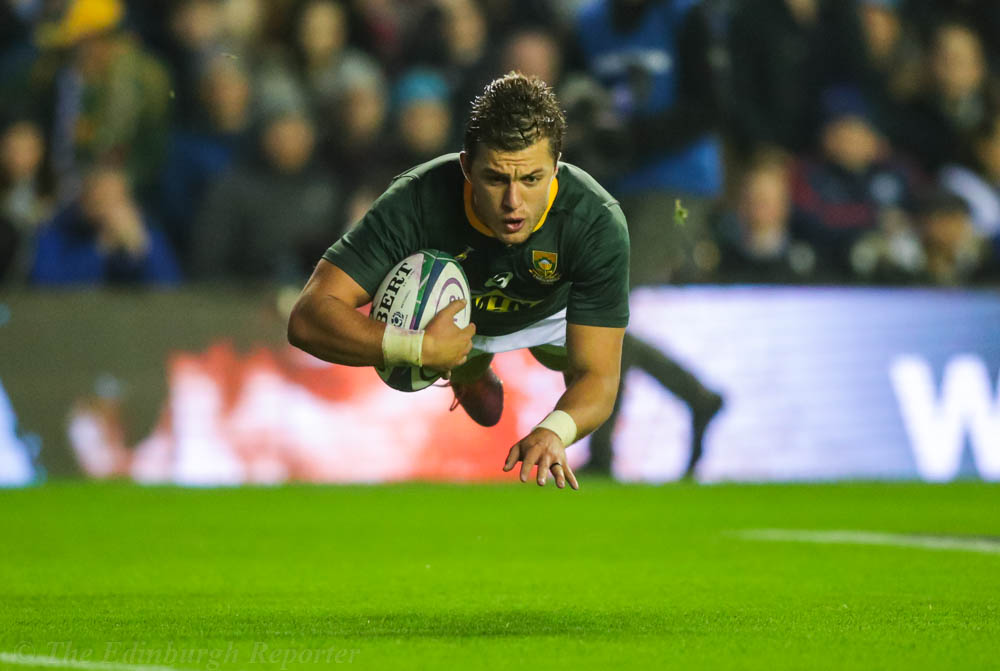 With Scotland ranked sixth (pre-match), one place above Australia, in World Rugby Rankings, their latest opponents in the three-match Autumn Series, South Africa (World ranked fifth) expected a tough match ahead of Saturday’s encounter at BT Murrayfield. Coming off the back of a narrow, three-point win over France, the Springboks had no illusions about the task that lay ahead. Scotland, for their part, had thrashed Fiji 54-17 the previous week, but ‘suspected’ that the ‘Boks were a whole different prospect…..

For the first five minutes of the match, that ‘different prospect’ was easy to believe. The home side barely touched the ball after Finn Russell’s kick-off and they were soon under pressure in their 22 once the South Africans got into their stride.

A string of offloads through the back division meant that the visitors were quickly inside Scotland’s half. The forwards then got involved as another offload from their 9, Embrose Papier, put the giant lock, RG Snyman, through into the 22. He was brought to ground by Stuart McInally, but, once again, the offloading game came to the fore, and Snyman’s pass found Steven Kitshoff in support.

Scotland were now scrambling for defenders as Kitsoff laid the ball off to the next man in line, winger, Sbu Nkosi. He was brought down just short, but the ball was quickly recycled, receiver, Jesse Kriel, crashing over for the opening try. Handré Pollard then slotted the conversion home for 0-7 after seven minutes.

From the restart it was back to work as South Africa again forced the game into Scotland’s half. Although the Scots had the majority of possession, it was around the fringes of the 22, which made any errors that much more dangerous. Russell then decided that a right-footed kick out wide, while facing to his left, was a good idea, but that went the way of a lot of ‘good ideas’ and full back, Willie le Roux, snapped up the loose ball and set up, what almost became, his side’s second try.

However, despite hooker, Malcolm Marx, getting to within a couple of metres, the Scots weathered the storm and were soon back in possession.

As they worked the ball up-field, albeit slowly, they kept the visitors on the move, drawing them tight and making a bit of space wide.

The killer blow started with Peter Horn’s pass, under pressure to Huw Jones, who himself was lined up for a big tackle, but his, quick, out of the back of his hand, looping lob went to Sean Maitland, who smashed aside his tackler, and was in the clear. He made metres of ground, before passing out to the recovering Jones. The final pass was a neat offload to Horne who sprinted in for the try.

A short delay then ensued while the TMO checked to see if Jones’ initial pass had been forward, but all was well and the try awarded. Greig Laidlaw then converted from out wide to level the score at 7-7 after 19 minutes. Try of the match? Maybe…

Two minutes later, the euphoria faded away as the ‘Boks came storming back with a fairly simple run in for Pollard. The South Africans had turned over the ball just outside the 22 and soon had the ball on the move out to their right. Pollard found himself with space and, despite a despairing attempt from a brace of Scots, he was in the clear to run round behind the posts to regain the lead. He then converted his own try and the lead was back out to seven points at 7-14 with 18 minutes still to play in the half.

Two minutes later, Pollard stretched the lead further with a successful penalty and 7-14.

Apart from a Laidlaw penalty on 26 minutes for 10-17, Scotland were now coming under immense pressure from the visitors and were struggling to clear their 22 at times, never mind their half.

That all turned around as the game entered the last 10 minutes. The Scots worked their way up the the half way line when Stuart Hogg took charge of the ball and kicked into space, then he used his pace to pressurise le Roux into booting the ball into touch.

With the five-metre lineout set up, the main pod drifted to the rear, opening up a gap near the front. A short pass and Hamish Watson came around the side onto the ball to take it on it’s short trip to a try and 15-17. Laidlaw’s ever reliable boot then drew the sides level at 17-17 as the game closed in an half time.

Just before the break, however, another infringement just outside the 22 gave Pollard the chance to regain the lead for the South Africans and the sides went into the break at 17-20.

Could the second half live up to the action, excitement and score card of the first? There was plenty of action and excitement, but the scoring was limited to three penalties. The first occurred early in the half when Scotland were on the attack. A wide pass from Horne out to Tommy Seymour was knocked out of the air by le Roux in an attempted interception. The officials then had a long look and deemed his knock-on deliberate, so he was binned. From the replays it looked as if Seymour had had a clear run in so there was a possibility of a penalty try, but the foul play was probably far enough out for cover to have come across, so straight penalty it was. Oh, how the crowd applauded that one…

Penalty over, Laidlaw had evened up the scores again at 20-20 with over half an hour left.

Despite being a man down, South Africa went on the rampage again and soon forced another penalty for Pollard to draw them clear at 20-23.

Yet another penalty for South Africa inadvertently set up a decent attacking platform for the Scots as Pollard watched his attempt strike the post and end up in the hands of Jones who made ground up to the half way line.

A couple of plays later and Scotland marched the Kings of the rolling maul back towards their line, drawing a close-in penalty as a result.

Hogg then went for touch! You could hear the ‘Boks rubbing their hands with glee as they now had the chance to strut their stuff and snuff out a Scot’s maul. Maul snuffed, they won the resultant scrum and cleared their lines. Chance gone…

The only other score in the half was another, Man-of-the-Match, Pollard penalty on 66 minutes for a six-point lead, which made up for an earlier wild miss.

South Africa also had nullified another two Scottish line out mauls easily enough on their way to their 20-26 win, but had to concede in the end that the Scots were now a much harder prospect than they had been for a good few years.

Next weekend, Argentina have the pleasure of facing Scotland at BT Murrayfield in the final home match of the series. The South Americans have also come a long way since becoming the fourth team in the Southern Hemisphere’s Rugby Championship and showed their mettle this year by beating both Australia and South Africa, but still finished fourth thanks to a winning bonus point gained by Australia over Argentina.

Should be good, then.