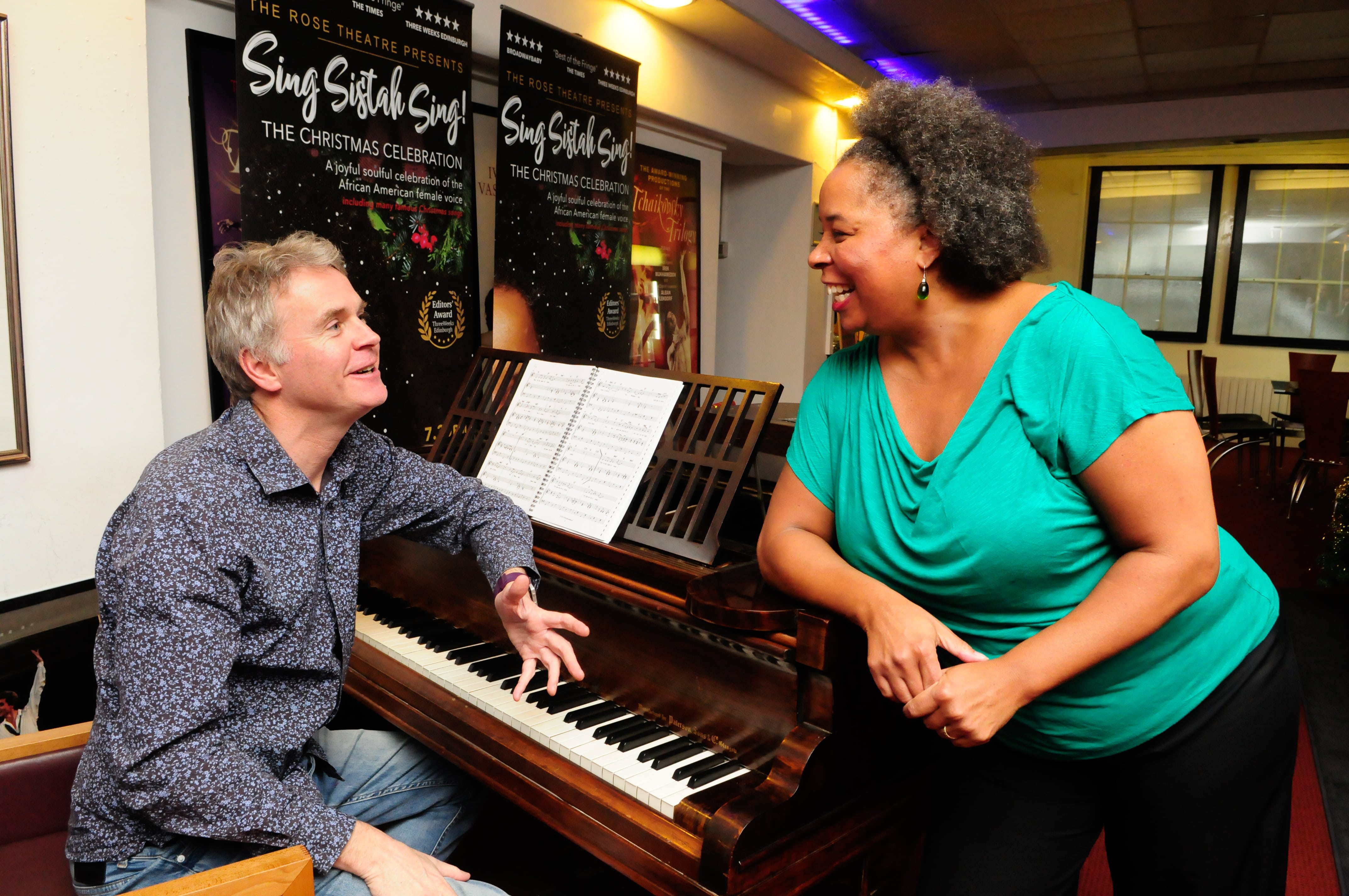 This could be the Christmas show you have been waiting for. A bit of a different twist on some Christmas classics, and some not so traditional tunes for this time of year. Andrea Baker, the internationally-renowned mezzo soprano, and pianist Richard Lewis will present a tinsel-tinged edition of Sing Sistah Sing!

This will be a celebration of Christmas and the sound and breadth of the African American female voice.

Peter will direct the show and we were lucky enough to hear a little of it at a special press preview. This duo is a highly talented one and we were blown away not just with Andrea’s splendid voice, but also Richard’s expert piano-playing. They first met in Germany and it was only by chance that they met again in Edinburgh. Andrea is busy with opera in between times mainly in Germany.

This city centre venue was bought by the Olivier Award-winning performer Peter Schaufuss along with the iconic St Stephen’s Church in Stockbridge two years ago and has been gradually transformed into a modern performance space.

We were honoured to be in the exclusive audience to hear some snippets from the show…..

Andrea explained that Christmas Day is extremely important to African Americans as historically it was the only day that slaves were not forced to work. Instead they sang – and they began with spiritual songs.

She continued : “At Christmas many classical pieces are often performed : Handel’s Messiah and Bach’s Christmas Oratorio. Some of the women who feature in Sing Sistah Sing! took that energy and brought it to Christmas music.

“A little German folk song written by Franz Gruber with Christmas lyrics has become a part of the Christmas celebration in the African American church. Many women made this piece their own.”

Then she sang a beautiful version of Stille Nacht which will be a part of the show and which we think will definitely get you in the Christmas spirit in December.

A little Gershwin – yes even a little Porgy and Bess – will be included in the show in the mode of a lullaby before Christmas Day itself.

So we think you can expect some surprises among the eventual songlist which they decide upon for the Christmas Sing Sistah Sing!

But they promise to send you out at the end of the show with positive energy in their time-honoured fashion.

Peter Schaufuss said: “We are so happy to bring a special festive adaptation of such a successful Fringe show to The Rose Theatre. It will be a treat for people in Edinburgh at Christmas time to see something totally different to what is out there and to savour the superb virtuoso performance of Andrea Baker and the considerable talent of Richard Lewis.”

Peter Schaufuss the owner of the Rose Theatre was keen to explain that although some 1600 shows have been staged at the theatre, mainly during the Fringe, he is counting this as the first season after the renovations which have been carried out over the last two years and which are now largely complete.

There are now five venues in the Rose, from the Basement to the Cabaret Theatre the Main House, the studios and the Attic.

The show to be performed by pianist Richard Lewis and his partner opera singer, Andrea Baker, will be staged in the Cabaret Theatre where the audience will sit at tables and chairs cocktail style. This will be a new show, not the same as the Fringe show which was a five star hit with so many audiences and reviewers during August.

The theatre now has a café which is open from 8.00am every morning for breakfast until 5.00pm in the evening.

Lewis, who attended the capital’s James Gillespie’s High School before graduating from Oxford University and later completing a Masters in music at University of Edinburgh was latterly the city’s Culture Convener.

Sing Sistah Sing! will show at The Rose Theatre (Rose Street, Edinburgh) on December 20-23 and 27-30, with performances on Thursday-Saturday at 7.30pm and Sunday showings at 5pm. Tickets from The Gilded Balloon soon or call 0131 622 6552